With Songs They Respond: The Diwan of the Jews from Central Yemen

The Jews of Yemen possess rich musical traditions, which have always been of interest to scholars of Jewish music, just as their unique cultural history has attracted the attention of Jewish scholars from an early stage. Interest in this culture is still alive today, half a century after the migration of most of the Jews from Yemen to Israel. Their special contribution to the development of Israeli culture, including many variants of Israeli music, is one focus of such interest. This publication of archival recordings of Yemenite Jewish music is still, therefore, considerably pertinent.

This album contains a selection from the varied range of recordings made by Naomi Bahat-Ratzon and Avner Bahat in the 1970s. They have been chosen in the ﬁrst place on the grounds of the quality of performance and recording, and, secondly, in accordance with the diverse principles and combinations characteristic of the diwan repertoire. Some of the songs are heard in a series of different performances, in order to enable the listener to appreciate the variety of melodies and their combinations, while focusing on the basic characteristics of the music of the diwan songs. Each singer chose the stanzas that he wanted to sing, as well as the melodies and the transitions between them. This enables one to comprehend the ways in which the songs have evolved in the Yemenite Jewish tradition and in their Israeli adaptations. 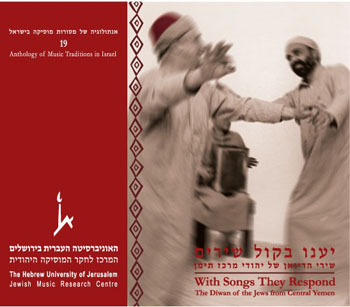 Im nin’alu daltei nedivim is a shira by Shalem Shabazi, signed Alshabazi. This poem is one of the most popular and widely known among the Yemenite Jews. It is sung on many different occasions, at weddings and other celebrations, to many melodies. Alternate stanzas are written in Hebrew and Arabic.

This recording features Shalom Keisar , accompanying himself on a drum, with the Kiryat Ono male voice ensemble, sing the ﬁrst and last stanzas accompanied by hand clapping. The singer opens with the song’s most widely known melody, which was popularized by Bracha Zeﬁra among the Jewish community of Palestine. It is sung in a responsorial manner: the soloist sings the opening hemistich and the choir the closing hemistich. The tawshihִ is sung to another, faster melody. It is usually sung in a responsorial manner, as follows: the soloist sings the ﬁrst verse, and the choir the second, the soloist sings the second verse and the choir the third. At the end of the song the singers sing a third, slower melody, and a coda-like passage, and then repeat the last two verses at a faster tempo, followed by the blessing Vekulkhem berukhim (You all are blessed).

With Songs They Respond: The Diwan of the Jews from Central Yemen

The Jews of Yemen possess rich musical traditions, which have always been of interest to scholars of Jewish music, just as their unique cultural history has attracted the attention of Jewish...

The Music and its Function in the Singing of the Qasīd anda birabbī dī kalaq (Hebrew)
Teiman, Music of the Yemenite Jews