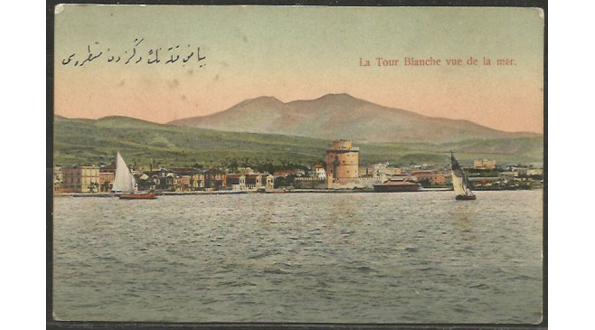 The 78rpm recordings that are still emerging from archives around the world offer unique vistas on past musical cultures. These findings show the extent to which repertoires of traditional music have evolved in the century or more since commercial recordings became a widespread product. Notably, the old recordings show, among many other matters, that widely popular songs from the turn of the 20th century are absent from late 20th century revivalist trends of these same repertoires. The Ladino or Judeo-Spanish song repertoire is an exemplary example of this phenomenon.

La galana, a Judeo-Spanish song included in the new publication of the JMRC, Eastern Mediterranean Judeo-Spanish Songs from the EMI Archive Trust (1907-1912), is one of the many popular Sephardi songs that have not entered the canon of the modern discography. It also barely survived in the Sephardic oral traditions which were recorded in ethnographic pursuits since the mid-20th century.

The song was apparently very popular at the time it was recorded commercially in Istanbul in 1909 by the Compagnie Espagnole de Salonique (CES), a studio ensemble comprising the most popular Sephardic singers of Salonica. It was still mentioned in an article in the Ladino journal El Mesajero (Salonica, 1939) that, referring to members of this ensemble, cites a fragment from La galana (Bunis 1999, English section, p. 329, note 87).

Moreover, the EMI Archive includes another recording of the song, this one by singer Elie Cohen. He recorded a slightly shorter version of La galana (in makam Hüseyni) entitled "Sultana" that is notwithstanding very similar to the CES recording.

Here is a comparison of the texts in both recordings:

The song is found among Sephardim from the Island of Rhodes. Two versions from Rhodes are a written version published by Amato-Levy (1987, p. 141) and an audio recording by Roza Avzaradel (National Library of Israel, Sound Archive, Y 05824a, recorded by Susana Weich Shahak, June 6, 1991). Avzaradel, who possessed one of the richest living memories of the song in Ladino, describes in this recording to Weich Shahak that La galana was a wedding song. In the conversation following the song she conveys interesting information regarding the content and meaning of the text, such as the transformation of the Turkish “ya yürek” (oh, heart) to “ya Yuri” (Yuri being the name of the groom) and the name of the bride, “Sultana” in Elie Cohen’s recording, becoming “Shoshaha/Rosina.”

Here is the transcription of Avzaradel’s text showing that in fact, oral memory may have preserved a more integral version of the song than the old 78rpm recordings.

A ti yo te quiero

Me muero, a ti yo te quiero.

Por ti ya Yuri, ya Yuri

A ti yo te quiero.

Ya Yuri, yo a ti te quiero

Another vestige of La galana appears in Isaac Levy’s Chants judeo-espagnols (vol. II [1970], no. 33). This is a very truncated version of the refrain with a version of the melody that in fact echoes the CES recording. 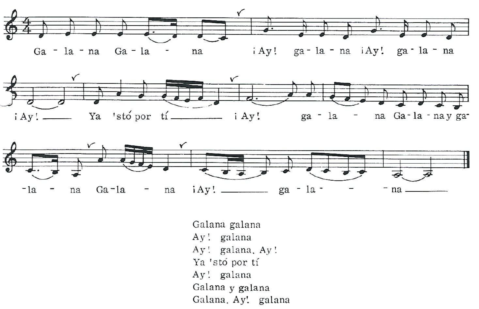 Another interesting version was preserved in the Bulgarian Sephardic tradition. The distinguished ethnomusicologist Nikolai Kaufmann collected the song and arranged it for choir, in the spirit of the modernist approach to folk songs characteristic of the twentieth-century Bulgarian school of composition. His modern polyphonic arrangement was recorded by the choir “Voices of Vitiz” (of the Bulgarian Academy for Performing Arts) conducted by Roumen Tsonev in the CD Jewish Songs from Bulgaria. The song itself starts at 00:30, after a theatrical introduction. The Turkish “ya yürek” (oh, heart) in the refrain of the CES 78rpm recording that became “ya Yuri” in Roza Avzaradel’s version turns apparently into “ya llori” (“I cried”).

This short excursion into one of the songs included in our new production shows the extent to which detailed research complicates the paths of transmission of the songs in Judeo-Spanish and shows the elusive modern destiny of old lyrical verses. The verses of La galana in all their permutations indeed recall layers of a Hispanic tradition of medieval origins.