German cantor and composer Moritz/Moses Rosenhaput was born (see Fränkel 1921) in the town of Jesberg near Kassel on March 14, 1841. However the Jewish Encyclopedia (1906) places his birth place in Offenbach on the Glan (today Offenbach-Hundheim, in the Rheinland-Pfalz State, Germany). His father, Jacob, was a rabbi and teacher; he married Johanna Fränkel in Speyer, on November 3, 1869. Rosenhaupt died in Nuremberg on November 16, 1900. He was related by marriage to an intricate family network that included several distinguished cantors. His uncle was Karl Fränkel (1810-1877), the husband of Henriette Sulzer (1808-1889), sister of the great cantor Salomon Sulzer from Vienna. Other uncles were Jacob Fränkel, cantor in Philadelphia and Isaak Fränkel, cantor in Grünstadt, Germany, whose daughter, Johanna, Rosenhaupt married. His cousin Emil Fränkel was a cantor in Strakonitz. Also his heir in Nuremberg, Theodore Fränkel (d. 1930), was a member of the Fränkel clan. 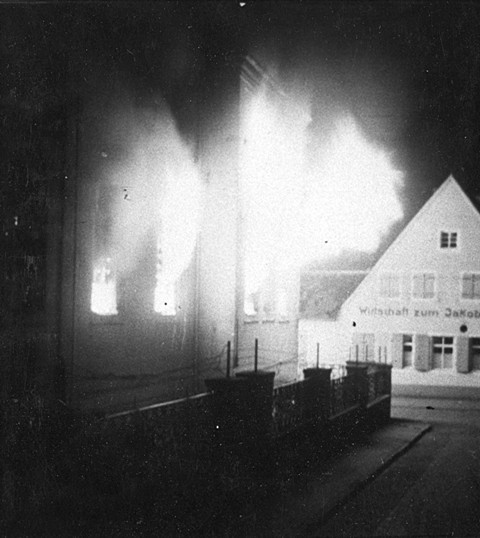 Rosenhaupt was one of the major codifiers of the South German synagogue liturgy in musical notation and yet his name does not appear prominently in the scholarly literature concerning the Western Ashkenazi tradition. Those closer to his time thought differently. For example Emanuel Kirschner, in a review/essay titled “Traditionaller Synagogengesang“ (Gemeindeblatt der Israelitischen Gemeinde Frankfurt am Main, Heft 3 (November 1930), p. 60) mentions Rosenhaupt in the same category as Mayer Cohn, Samuel Naumbourg, H.H. Katz, L. Walbott, Abraham Baer, and Isaac Lachmann as the most important figures of the German synagogue tradition of the late nineteenth century. Not much of his work has remained (see below). A photo of the burning synagogue of Speyer, left, as photographed on the night of November 9, 1938 and published by the archive of the city of Speyer, informs us that his music collection was destroyed during the conflagration.

Rosenhaupt studied under Oberkantor Maurice Löwe in Strasbourg, and continued under Salomon Sulzer, to whom he was connected by family ties, in Vienna. He became a cantor and teacher at Cochem on the Mosel and in 1864 was called to serve at the developing community in Speyer. Two musicians were among his teachers: Professor J. Hess from Heidelberg; and (according to the Jewish Encyclopedia) the “choir leader Benz,” who taught him theory and counterpoint. In 1881 Rosenhaupt succeeded the great cantor and theoretician Josef Singer, who had been called to Vienna, to cantor at the prestigious Great Synagogue of Nuremberg.

Rosenhaupt is the author of the following works, copies of which have survived in very few major libraries in the USA, Germany and at the National Library of Israel (See WorldCat):

Vol. III: Werktags-Gottesdienst, Traditionelle Melodien u. Casualien, Nürnberg by the author, printed in Leipzig by F.M. Geidel or in Frankfurt a./Main: J. Kauffmann, preface from 1895.

Two manuscript volumes by Rosenhaupt comprising more than 500 pages titled Synagogengesaenge are at the Leo Baeck Institute Archives (15 West 16th Street, New York, NY 10011) catalogued as MS 155/MSF 13. They mostly contain settings by Rosenhaupt mixed with a few pieces by other composers for daily, Sabbath and High Holiday liturgy for cantor solo, choir and organ. This is an invaluable resource for the study of the South-German nussah (see illustration, below). 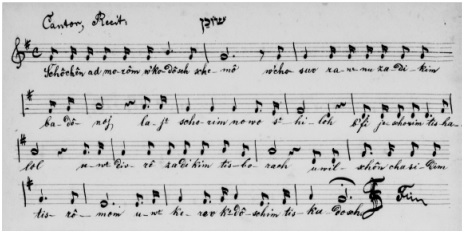 A note in The Chronicle (vol. 58, 1999) of the Klau Library of the Hebrew Union College in Cincinnati announces the following:

"John L. Frankel, of Los Angeles, has donated four volumes of musical manuscript containing the regular Sabbath and holiday liturgy used at the Hauptsynagogue in Nürnberg. They had been the property of his father, Theodor Fränkel, who served as Cantor there from 1901 until his untimely death in 1930. Two volumes, 'Hohe Festage' and 'Sabbath,' had belonged to his predecessor, Cantor Moritz Rosenhaupt (1841-1900). The other two volumes contain entries, both compositions and arrangements of the compositions of others, by Cantor Fraenkel. These constitute a most unusual and certainly unique artifact of Jewish musical life in that community. The Klau Library, HUC-JIR/NY has Rosenhaupt’s three-volume work, 'Schire Ohel Jaakov' in the Rare Book Room"(http://legacy.huc.edu/chronicle/58/).

Besides these published and manuscript compositions, Theodore Fränkel (1921) reports on a large amount of sacred and secular compositions that Rosenhaupt composed. Apparently the majority of his works remained in manuscript form and are, as of the present, missing.

Rosenhaupt translated Hebrew prayers to German and also compiled manuals for the teaching of Hebrew. He also contributed to cantors’ journals. A thorough search for his writings is a desideratum. See, for example:

Edward Stark was born in 1856 in to father Josef Stark, a local cantor and butcher. As a young boy, Edward...

Arranged for cantor and SATB chorus and organ or piano.