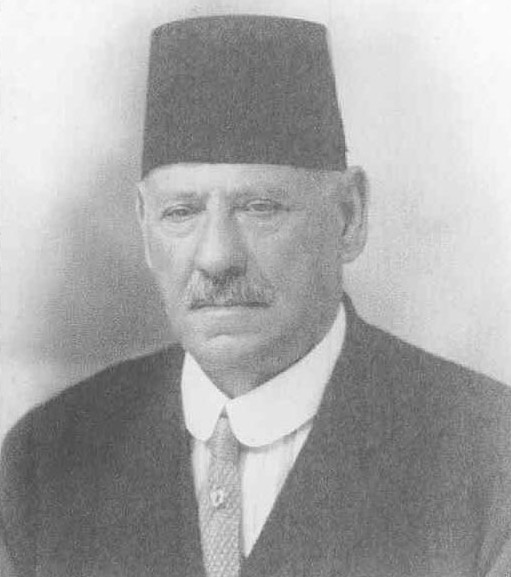 In spite of his unparalleled fame as a singer and musician during his lifetime, very few details about the life of Haim Effendi have reached us. Born Haim Behar Menahem, Haim Effendi (a.k.a. Edirneli Haim Effendi and Haim Yapağı, i.e. “Haim the Woolman or Wool Merchant,” because the family owned some kind of a wool business) was born in Edirne (formerly Adrianople in Western Thrace, today Turkey) in 1853. He spent most of his life in his city of birth although he toured extensively.  From 1925 to 1935-36 he lived in Alexandria, Egypt. He passed away in Cairo in 1938. Haim had three daughters, Emilie, Esther and Beatrice, and three sons – Nissim, Moise and Albert. Their descendants spread to the Americas and to Israel.

Haim was a quintessential Sephardi singer of his period, a critical era of deep social and cultural transition in the history of the Judeo-Spanish speaking Jews. The old traditional Ottoman Jewish community ruled by rabbinical authority was shattered by modernizing trends characterized by an exposure to Western culture (most particularly French), to liberal trends in Judaism (especially to Jewish nationalism or Zionism) and to subversive political ideologies within the Ottoman Empire. Haim was educated in one of the most important centers of Sephardi religious music, Edirne, where a local Jewish choir called Maftirim used to perform its ancient repertoire of Ottoman Hebrew music on Sabbath mornings and afternoons at the synagogue called Portugal.

Haim, however, did not become a full-time cantor who also happened to record songs in Ladino, as Isaac Algazi did. He moved into what we may today call the “entertainment industry,” appearing in public venues in various cities where large Sephardi communities existed.

There are two important issues that are critical when one examines Haim’s recordings. First, he performed “novelties,” i.e. new songs, some of which we assume that he himself “composed.” By composition, we mean the setting of original texts in Judeo-Spanish to extant melodies of well-known songs in Turkish and perhaps Arabic songs too, a procedure which was customary among Sephardi singers. Haim also absorbed new songs from diverse sources and “Sephardized” them, i.e. rendered them in his particular style. Secondly, he commanded repertoires of secular songs in at least four languages: Judeo-Spanish; Turkish; Arabic; and modern Hebrew, along with his command of the religious Hebrew repertoire.

In spite of the meager information regarding an artist of great merit as Haim Effendi, the hard-core evidence, namely, the uncommonly large number of commercial recordings from the early 20th century, speaks of his fame. This reputation is confirmed, for example, by him being mentioned as a hero in a folktale (no. 5324 at the Israel Folktale Archive, University of Haifa, recorded in 1963 from Aaron Franco of Turkey by Dov Noy). This story is a variant of a folk narrative type (AT 922*C I-B [IFA]) in which a Jewish musician is forced to play or sing before the local ruler (King, Sultan, Prince, etc.), during a solemn Jewish holiday, against religious precepts. He refuses and pays the price (death or suicide), or he agrees but chooses to play a Jewish melody from the holiday repertoire. His exceptionally moving performance changes the mind of the ruler who absolves the Jew and even pays him a large sum of money or appoints him as his chief musician. In most versions of this folk tale, the hero is an unspecified Jewish musician, but due to the legendary fame of Haim Effendi, he surfaces as the hero in this specific version. The story is as follows:

"A King of Izmir fought against the Slavs. The city of Belgrade fell and he was sad. The servants wanted to bring someone to lift his spirit up. He ordered them to bring Haim Effendi, the most famous violinist in all of Turkey. They came to Haim Effendi’s house and found him seating next to his prepared table. Ordered to come, he responded that he respects the King, but he cannot come. The envoys told the King what happened, and the King ordered to send police officers to bring him up. It was the eve of Yom Kippur (the most sacred Jewish holiday) and the police officers found Haim Effendi covered with a talit (prayer shawl) and ready for the meal preceding the fast. They brought him by force and told him: “your verdict is to die, but before that you must entertain the King.” Haim Effendi did not know what to play; he opened the prayer book that he held in his hands and started to play tunes of the Evening Prayer, the selihot (penitential prayers), etc. The King was deeply moved by the music and asked what is it? Haim Effendi explained to the King what it is and the King absolved him and gave him a lot of money."

The relation between Haim Effendi and the Sublime Porte, which as we have seen has factual antecedents, remained vivid in the oral tradition of the Ottoman Jews. For example, in an interview with Estrella Mayo from Rhodes by Samuel G. Armistead on February 7, 1958, she says: “Está bien la placa. Yeya de Estambul que salía. Esta placa estaba cantada de Jaime Fende. Yo creo que aínda existe esas placas. Jaime Fende era un cantador muy bueno, cantaba para el sultán de la Turquía, de Jamid, y cantaba estos como ‘Serena de mar’” (“This record is fine. It was produced in Istanbul.  This record is sung by Haim Effendi. I believe that these records still exist. Haim Effendi was a great singer, he sang for the Turkish Sultan, for [Abdul] Hamid, and sang [songs] such as ‘Serena de mar’”) (original transcription accessed from the website of the Armistead, Silverman and Katz collection, www.sephardifolklit.org, call number ec073-4).

An additional hint of Haim’s fame as a singer prior to his recording career, as well as of his activity as translator of liturgical texts into Judeo-Spanish, can be found in a publication from ca. 1895. This is his translation of the poem, Im afes rova‘ha-qen (CD 1, no. 12) ,which was printed in Ruschuk (Bulgaria) at the Alcalay press and was typeset by the teacher and hazzan Nissim Halevy from the Geron synagogue in that city (a copy can be found at the library of the Ben Zvi Institute in Jerusalem). The title of this publication reads: “Conponido de Haim Effendi cantador afamado de Edirne” (“composed by Haim Effendi, famous singer of Edirne”).

To what extent the recordings of Haim Effendi influenced the Sephardi oral lore throughout the 20th century is a matter for future assessment. It is however certain that the luggage of the Sephardi Jews who left Turkey and Greece in the first two decades of the 20th century included copies of his recordings. Havassy’s study of the repertoire of the singer and ‘ud player Isaac Sene from Turkey, as documented by his wife Emily Sene who also immigrated to the USA in the mid-1920s, shows the clear imprint of Haim’s Ladino repertoire (Havassy 2007). Also, many versions of songs in Ladino included in modern anthologies have a clear rapport with Haim’s recorded performances. Thus, the disregard (by scholars) of the impact that modern technology had on the traditional Sephardi music in the past half century or so can now be amended by listening to Haim’s recordings.

(Text taken from the liner notes accompanying the JMRC release An Early Twentieth-Century Sephardi Troubadour: The Historical Recordings of Haim Effendi of Turkey.)