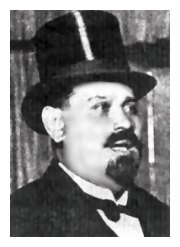 Gershon Sirota was born in 1874 in Podolia, where his father officiated as the village cantor. As a boy, Sirota frequently assisted his father in leading services at the local synagogue. At the age of 13, Sirota went to visit his grandparents in and was hired to lead services at the local Bet Hamedrash (small house of prayer), where his grandfather was a member. The board of trustees, and other music professionals in attendance, were taken aback by the young boy’s talent.

After hearing Sirota’s service, Yakovkin, the choirmaster of the Shalashna Synagogue in , pursued Sirota until he agreed to join his choir. Consequently, Gershon’s parents moved to , where his father began working as a hazzan at one of the smaller local synagogues. Sirota took advantage of the rich tradition of hazzanut in . He attended services at all of the synagogues in the city, exposing himself to a myriad of local and original styles. Yakovkin encouraged Sirota to consider studying music formally at the Odessa Conservatory of Music. Based on several recommendations submitted to Baron Kolbuss (the director of the conservatory) on Sirota’s behalf, he was admitted to the conservatory with a full scholarship.

Under Baron Kolbuss, Sirota studied music theory, vocal technique, and opera. Although Sirota excelled in his secular music studies, pressure began to mount for him to focus more on his cantorial career. As a result, Sirota increased his duties at the Salashna Synagogue, serving as assistant cantor to Yankel Soroker. In 1892, at the age of 18, Gershon was hired by the congregation of the “Prikashteshikes” in a suburb of .

In 1894, Sirota was offered a scholarship to study at the Conservatory of Vienna, which his congregation encouraged him to accept, providing him with a leave of absence and full pay. Once arriving in , Sirota made the acquaintance of Joseph Singer, the successor of Salomon Sulzer at the Seitenshteten Temple. Singer was greatly impressed by the young man’s talent and helped to promote Sirota when possible.

Just as Gershon began to gain traction in , his father fell ill, and Sirota returned to immediately. In 1897, Sirota was appointed as the cantor of the Shtatshul (local synagogue) in Vilna, a position he held for eight years. It was in Vilna that Sirota began his collaboration with choirmaster Leo Low, who would remain a close colleague throughout his career. While working in Vilna, Sirota staged several large-scale concerts with the help of colleague Leo Low. Sirota and his choir starred in the grand concert of Jewish music of 1902, performed at the reception for Theodore Herzl upon his visit in 1903, and presented an annual concert in honor of Czar Nicholas II.

That same year, Sirota released his first recording, beginning what would be a long and successful career as a recording artist. In 1908, Sirota was invited to where he was appointed head cantor of the prestigious Tlomaczke Street Synagogue. Leo Low accompanied Sirota to Warsaw to work as his choirmaster. In 1912 Sirota and Low arranged a concert tour in New York, performing at several prestigious locations, including Carnegie Hall.

Their appearance at Carnegie Hall made quite a splash, the following day, the “WAHRHEIT” reported: "Carnegie Hall was packed from top to bottom. The crowds which remained outside were even greater; men and women, young and old who tried without success to get in to hear the concert by this great tenor and the choir under the direction of Herr Low. New York has never witnessed such a scene. The police had their hands full in keeping order on the street. Among the gentile members of the audience were such personalities as Baron Shlimenbach, the Russian Consul-General, State Senator Tom Sullivan, the Rev. Dr. Parkhurst and Herman Rider of the 'City-News.' Also present were Rabbi Stephen S. Wise, Judge Neuberger, and the famous star of the Metropolitan Opera, Alma Gluck."

This concert cemented Sirota’s standing as a cantor of international repute. He continued to serve at the Tlomaczke Street Synagogue until 1927. After completing his term at Tlomaczke Street, Sirota began to devote his time almost exclusively to concertizing and recording. Although he never composed original works, Sirota became known worldwide for his dizzying vocal improvisation. In his own lifetime, Sirota was awarded with such titles as, “King of the Hazzanim” and the “Jewish Caruso.” It is said that Sirota had a generous spirit, often volunteering to perform weddings free of charge for those who could not afford to pay his, or any fee. Sirota and his family upheld their permanent residence in Warsaw during WWII, and perished in the ghetto uprising of 1943.

Gershon Sirota was born in 1874 in Podolia, where his father officiated as the village cantor. As a boy, Sirota frequently assisted his father in leading services at the local synagogue. At the...

Richard Tucker was born in New York, U.S.A. In addition to his work as Hazzan, he was a highly regarded American opera tenor.

Jan Peerce (birth name Jacob Pincus Perelmuth) was born in in 1904. Peerce’s first instrument was the violin, beginning his performance...