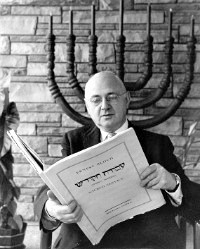 Born on February 14, 1902 in Gronau (North Rhine-Westphalia) as Erich Mendel, Mandell passed away in Philadelphia on February 6, 1988. Musically gifted since his youth, he trained under prominent cantors of his time. At the age of twenty, the Jewish community of Bochum engaged him as cantor, choir director and teacher. Parallel to his educational and cantorial duties turned to the collection of original scores (manuscript and printed) and books about Jewish music while writing for journals on Jewish music and music education. Mandell was arrested a day after Krystallnacht and taken to the Sachsenhausen concentration camp. Amazingly released, he fled to Amsterdam while miraculously transferring his collection to Holland. However, the shadow of Nazi expansion led him to move on to England in July 1939 while leaving his precious collection behind. In June 1941 he reached American soil and joined Har Zion Temple in Philadelphia. Immediately upon his resettlement, Mandell engaged in regrouping his music collection. After the war he started to recover his own materials while purchasing new ones from survivors and immigrant cantors. Upon his retirement in 1970, he endowed his magnificent collection to the music library of Gratz College where he taught and from where he received an honorary doctorate in 1981.

Paradoxically but not surprisingly, as Mandell’s figure waned from the American Jewish scene it enjoyed a revival in early 21st century Bochum, the German city in whose synagogue Mandell served as cantor and from which he was brutally evicted on Kristallnacht. Dr. Manfred Keller, an evangelical theologian from Bochum knew about this prominent Jewish son of his city and planned to mark Mandell's centennial (2002) with a publication. During his research, he came across two valuable resources. One was composer and music educator Ronna Honigman (now a resident of California) who had written her MA thesis on Mandell’s life and work at Gratz College in 1982. Another one was a nephew of Mandell, who survived the Holocaust hidden by nuns in a convent and since then had converted to Catholicism. Both provided raw materials for Keller’s impressive 2006 volume Erich Mendel/Eric Mandell: zwei Leben für die Musik der Synagoge incorporating Honigman’s unpublished work. Dr. Keller, still very active in maintaining the memory of the pre-War Jewish community in Bochum through public events (concerts of Jewish music included) and tours, also promoted the renaming of the public space in front to the New Synagogue in Bochum inaugurated in 2007. Today the square is called “Erich Mendel Platz.” At the same time, a search for the name of Mandell in the website of the Philadelphia Har Zion Temple where he was choir director and music teacher for decades rendered zero results.

In 1968, Mandell described himself as “Director of Music at Har Zion in Philadelphia, lecturer, composer, conductor and musicologist, who established and maintains the Mandell Collection, one of the largest private libraries of Jewish music in the world. He was not exaggerating. His collection at Gratz College compares in scope and importance to those found in other major American and Israeli institutions. Yet, the full extent of the Mandell collection, and most importantly, its historical significance, remain to be unpacked.

The Re-discovery of the Music of the Haupt-Synagogue of Mannheim at Gratz College library: The story about Eric Mandell, his collection and the rediscovery of the music of Hugo Chaim Adler by Edwin Seroussi.

"Eric Mandell" on the National Library of Israel website.

The Eric Mandell Collection of Jewish Music at the Music Library in Gratz College.

Cover of book on Mandel: 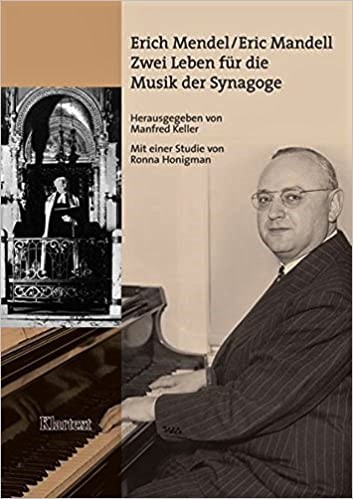 Born on February 14, 1902 in Gronau (North Rhine-Westphalia) as Erich Mendel, Mandell passed away in Philadelphia on February 6, 1988. Musically gifted since his...

A complete collection of music for Shabbat and Festivals written for one to two voices. The score is divided by service beginning with arrangements for Shabbat Minhah and concluding with the Ne'...

Collection of original compositions and arrangements for the Yom Kippur Service.