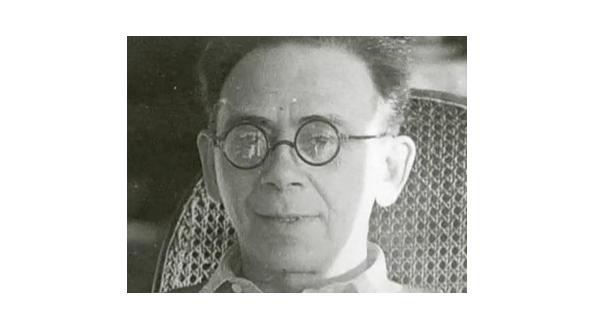 I   Transcriptions and Editions 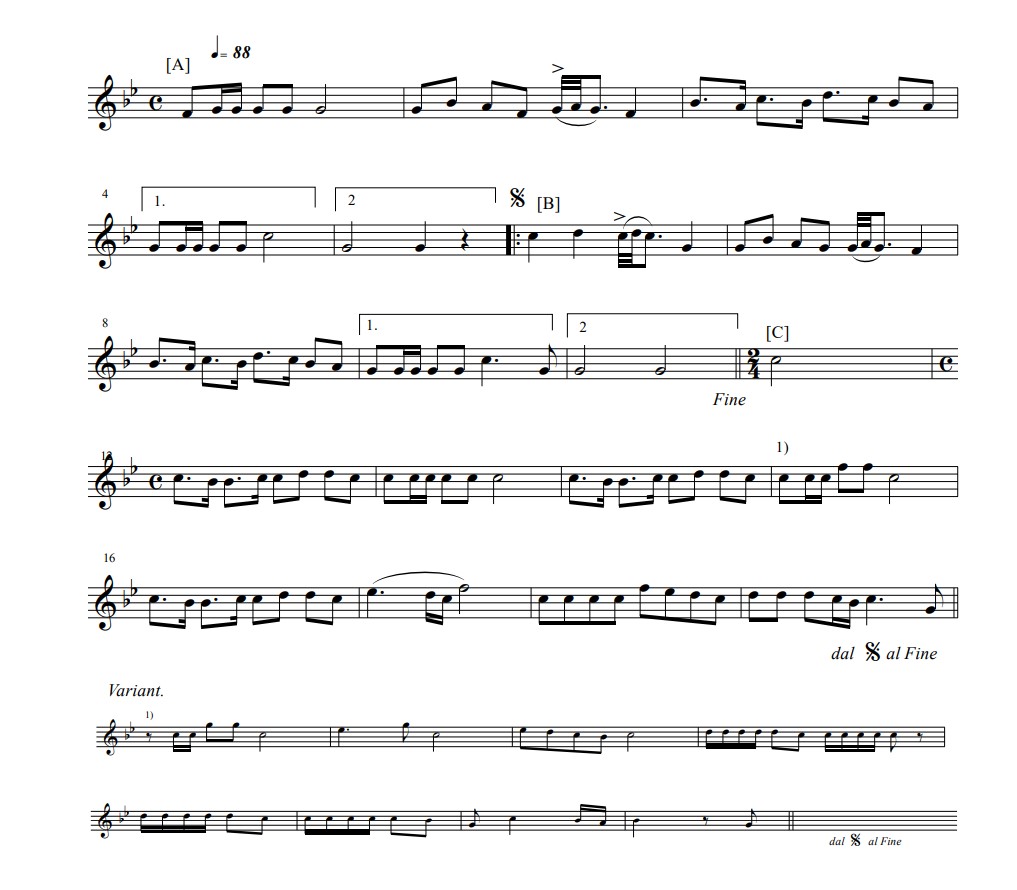 Figure 1: Nign no. 3 in Beregovski’s manuscript

Nign, no. 3 in Beregovski’s manuscript, was published several times. It appeared in print for the first time in Beregovski’s Evreiskiie narodnyie pesni [Jewish Folk Songs] – the collection that Beregovski prepared for publication during his last years, but did not live to see it published, and that was edited and brought to print in Moscow, 1962, by Sergei Aksiuk (no. 116). Here the nign appears in its original tonality, e minor natural. 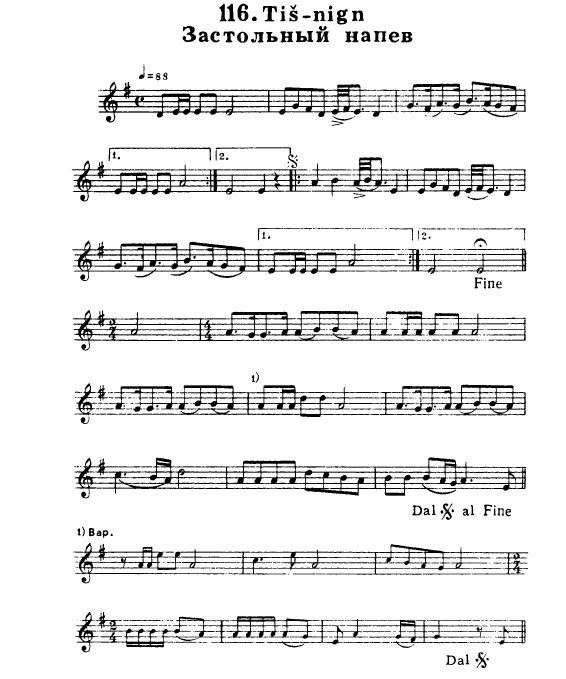 From this 1962 source it was reprinted in M. Beregovski, Old Jewish Folk Music: The Collections and Writings of Moshe Beregovski (edited and translated by Mark Slobin. New York, 1982, p. 462). It was later on republished in M. Beregovski, Evreiskie narodnye napevy bez slov [Jewish Folk Tunes Without Words] (Moscow, 1999, no. 3), the first edition of most tunes from Beregovski’s entire collection of Hassidic nigunim that remained unpublished after he completed it in 1946 as volume 4 of his planned five-volume collection of Jewish Music. The tonality was restored to g minor natural, as in Beregovski’s 1946 manuscript, in which all the tunes are transposed to the tonic G. 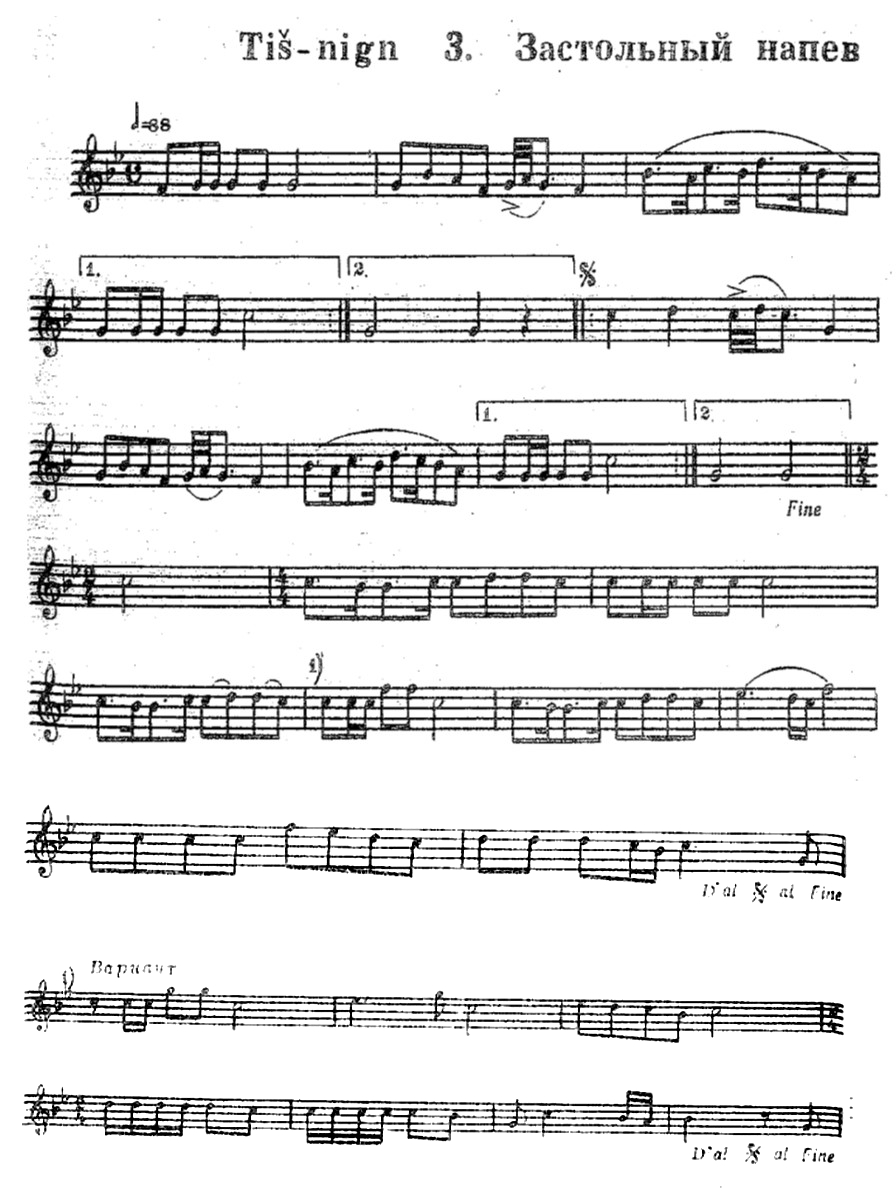 Finally, a facsimile of this original 1946 musical notation accompanied by Beregovski’s own comments to the nign in Russian was published as a digital file in M. Beregovski, Evreiskii muzykalʹnyi folʹklor v 5-ti tomakh na CD-diskakh [Jewish Musical Folklore in 5 volumes on 5 CDs] (Kiev, 2013, CD4, no.3). 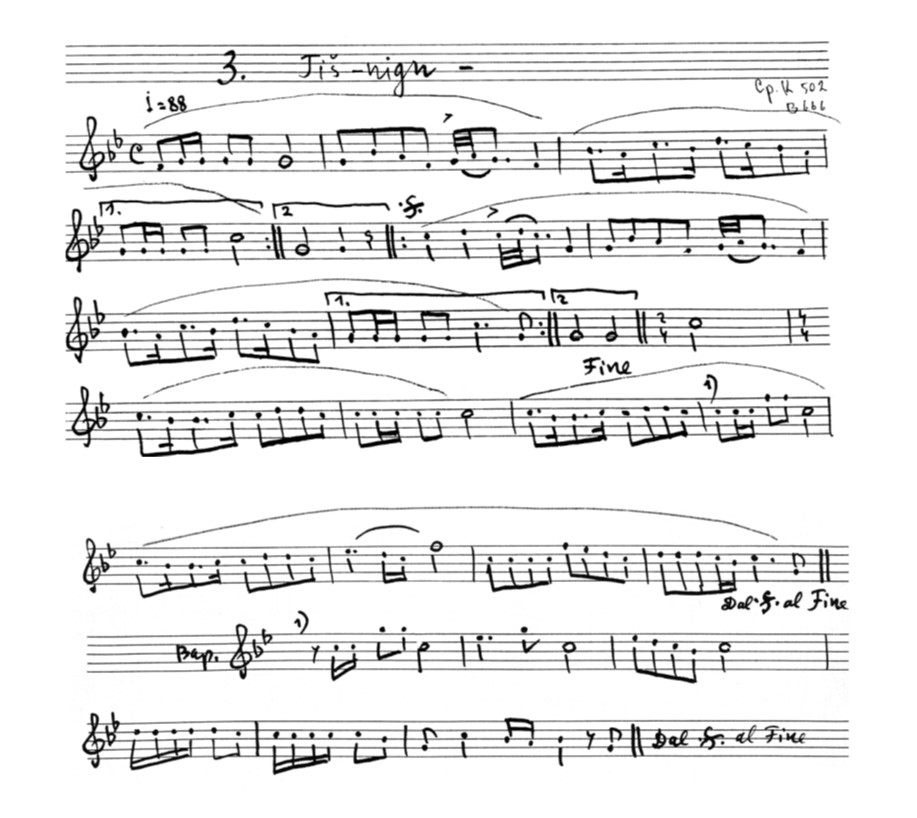 According to these sources, the tune was transcribed by ear by M. Beregovski himself in 1920 in Kiev; Beregovski learned it in his childhood (ca. 1900) from his father in the shtetl of Makarov, Kiev province. Below is the nign in Beregovski’s handwriting from the manuscript prepared for publication. Note that the large slurs in Beregovski’s manuscript that were reproduced in the 1999 edition are apparently analytical tools. For this reason, they do not appear in our modern version above.

An additional version of the same nign that was likely available to Beregovski appears as number K1337 courtesy of the Kiselgof-Makonovestsky Digital Manuscript Project of the Klezmer Institute. Documented in 1915 from Aronson, it is titled “A Freilichs,” i.e. a dancing tune, a testimony of the porosity between vocal and instrumental repertoires of the Eastern European Jewish tradition.

Figure 5: Version of the nign documented in 1915 from Aronson

Nign no. 3 shows seven musical traits that are common to the Hassidic repertoire from Western Ukraine: 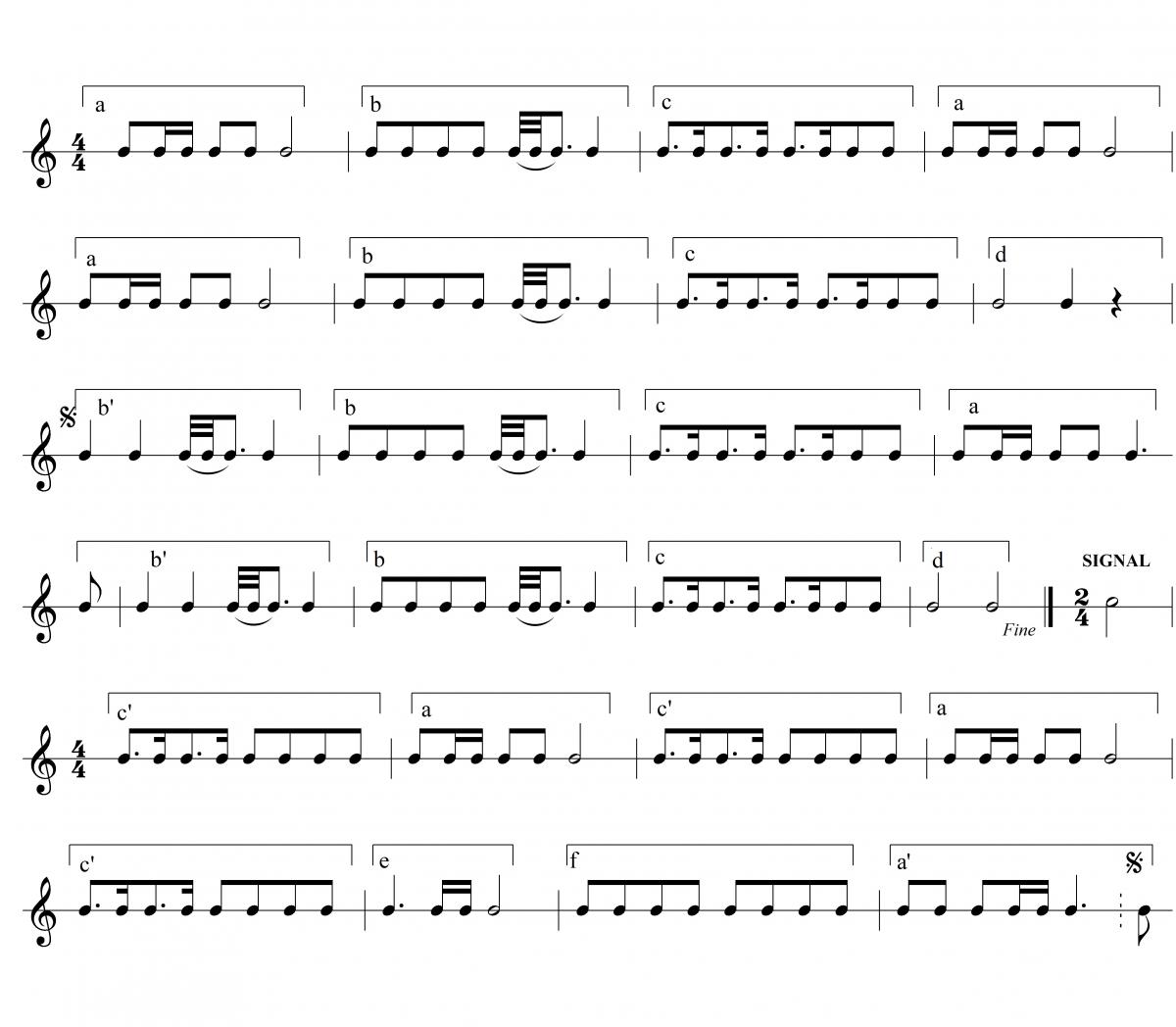 Figure 6: Rhythmic structure of Nign no. 3.

The lack of a specific regional context of the nign transmitted within the Beregovski family and its strong connections to the Eastern European melos of the Jewish prayer, Yiddish folksong and instrumental music, enabled the distribution of this piece throughout the vast Jewish settlement in Ukraine, Poland and Russia. Thus, recent ethnographic work among Hassidim belonging to several dynasties living in Israel shows that they perform this nign assiduously. Its distribution includes the Hassidic courts of Tolna (Volyn/Volhinya, today Talne in the Cherkasy Oblast) and Vizhnitz (Vizhnytsia) of Ukraine[6] (see below Archival Recording no. 2), Karlin, Chabad (Lyadi, Lyuvabichi) and Slonim of Belarus[7] and some from the Hungarian territories.

Hereby is the Chabad version: 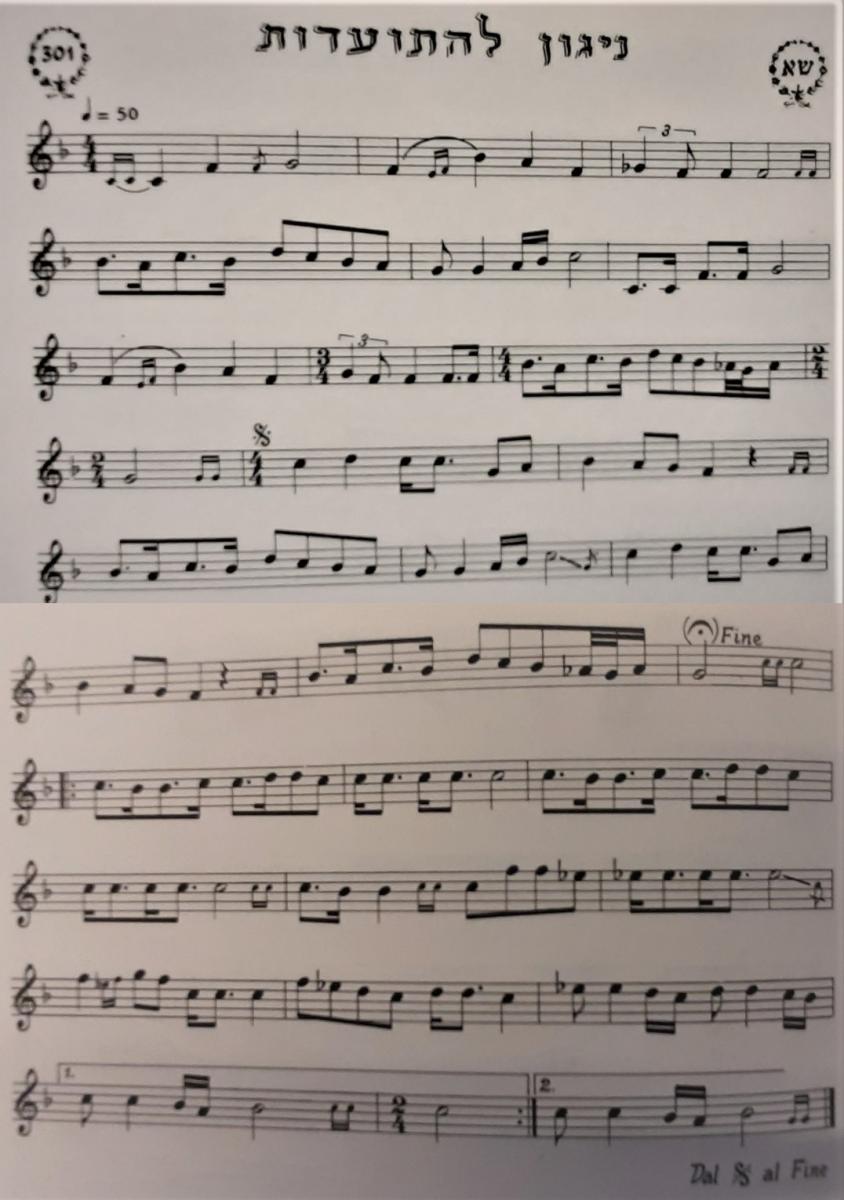 The testimony by Rebbe Yesh’ayah Meshulam Feish Rottenberg [b. 1962], a scion of the Koson (Mezőkaszony, Hungary) dynasty from the USA, who became the Rebbe of Ruzla (Rozdol, Poland) Court further clarifies the routes of transmission of this nign. In two interviews with Yaakov Mazor (Jerusalem 2006 and 2017), R. Rottenberg describes the ways specific agents were involved in the transfer of the nign from Eastern Europe to Jerusalem in the first decade after the Holocaust. From his testimony, one may learn that this nign was unknown to the descendants of the Ukrainian Hassidic courts in Jerusalem, and that Hungarian Hasidim transmitted it to their counterparts after immigration (additions in brackets are ours):

Rabbi Zvi Hirsch Rosenboym [1920-2006] from Kretchniv [today Crăciunești, Romania], the leader of a Hassidic court in Jerusalem (previously in Kiryat Ata, near Haifa), used to sing this nign at the tish for the eve of the Sabbath, [confirming Beregovski’s appellation of this item as “tish nign”]. His father-in-law, R. Aharon Mordecai Rotner, the son in law of Rebbe Yosef Meir Kahana (1911-1976), the Admor of Spinka [Szaplonca, Hungary], heard this nign in his youth, when he was meshamesh [assistant] of the Rebbe of Belz [Galicia] R. Aharon Rokeach [1877–1957] in Jerusalem, from R. Yehezkel Shraga Mertz [1908-1972], who was a Hasid of the Rebbe of Satmar [Szatmárnémeti, Hungary, currently Satu Mare, Romania]. R. Mertz performed it when he came from the USA to visit the Rebbe of Belz. Interestingly, on his first visit R. Mertz sang only sections B-C while on the second one he performed the entire nign in the ABCB form. In the course of time, R. Mertz became in-laws with the Rabbi Zvi Hirsch Rosenboym from Kretchniv and this is how the later most probably received the nign.

This case shows that the main paths of transmission of this nign are based on family relations and on the custom of the courts of Hassidic Rebbes to host mutual visits exposing the visitors to new nigunim that in their turn they carry back to their hometowns. In turn, visitors used to teach nigunim to their hosts as a gesture of gratitude and appreciation for the hospitality.

The openness to diverse context of performance of the same nign (trait no. 7 above) made possible for each Hassidic court to adapt the piece to its specific needs and to perform it according to different aesthetic ideals. The rich documentation available to us shows that the nign documented by Beregovski appears as a tune of rejoicing that can accompany dancing, as a slow piece among the Belorussian dynasties of Chabad and Slonim, and also as a processional tune to accompany the groom to the synagogue on the Sabbath before the wedding in the Tolna court.

The renowned Russian Jewish composer Joseph Achron (1886-1945) who was associated with the Saint Petersburg Society of Jewish Folk Music transcribed a faster version of this nign as it was performed in the court of Tolna (Talne, Ukrainia). Joachim Stutschewsky published this version that allows us to reemphasize several features of our typological description, especially the rhythmical asymmetry, modality, upward melodic movement, formal complexity, abundant repetitions, and the openness to diverse tempi of one and the same melodic model.[8] 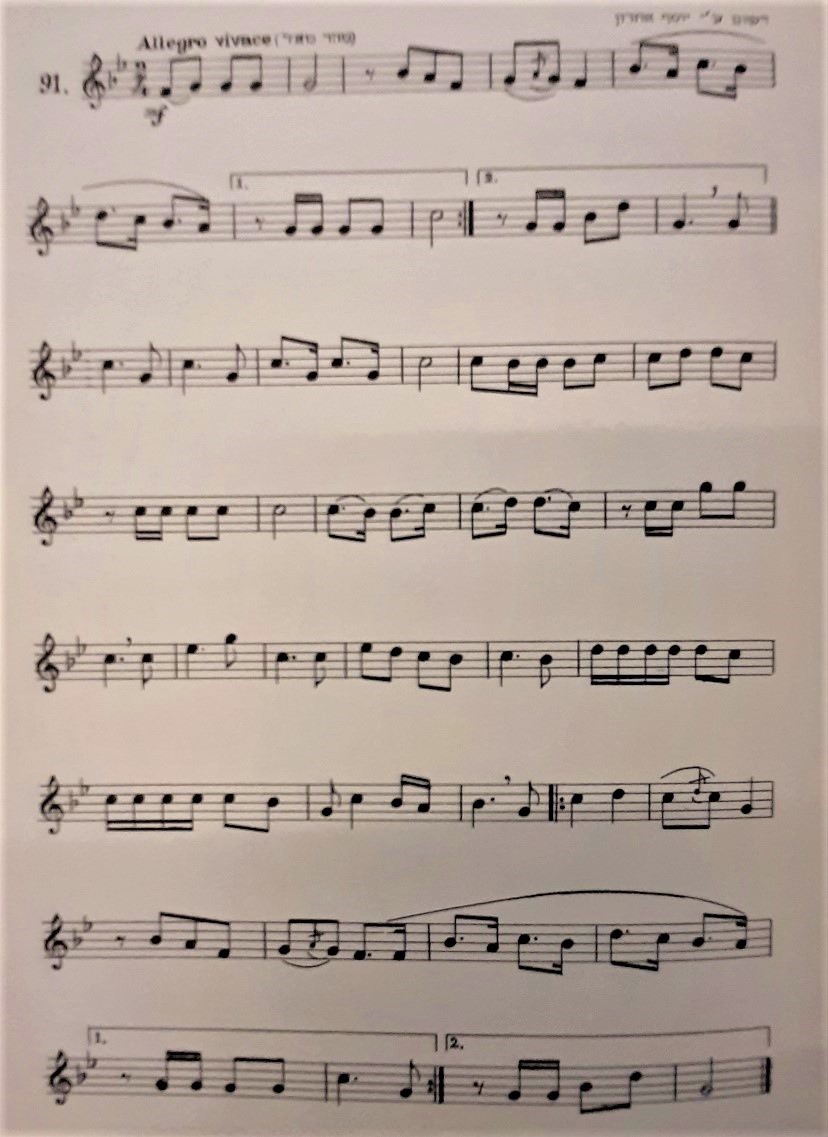 Figure 8: Tolna version transcribed by Achron as reproduced by Stutschewsky

The structural permutation of sections is a hallmark of traditional Hassidic nign “composition.” While there are nigunim whose structure remains stable in all documented versions (usually pieces of more recent composition), many more show phenomena similar to the ones we see in the versions by Beregovski and Achron of the “same” nign. To what degree do the avatars of musical memory play a role in these structural permutations? Are these permutations an intentional reordering of musical ideas that characterize specific dynasties or regional traditions? Is Achron’s version related to the same Kiev sources as Beregovski’s? Such issues of transmission and composition in Hassidic nign research can only be clarified by the future analysis of further documentation.

Finally, we must notice the presence of fragments from nign 3 in the Zionist Hebrew repertoire consolidating in Palestine since the late nineteenth century, later becoming an emblematic signifier of modern Israeli culture. As Mazor has shown in his groundbreaking study, this new Hebrew repertoire, usually known as Shirei Eretz Israel (Songs of the Land of Israel) or Zemer ‘Ivri (“Hebrew song”), is saturated with Hassidic nigunim.[9] These traditional Hassidic melodies were adapted to new texts and dances by the Zionist pioneers in Ottoman and British Palestine, many of whom grew in Hassidic households in Eastern Europe before forsaking them in favor of Zionism.

For example, Section C of Beregovski’s nign 3 appears in the third section of a song belonging to the earliest stratum of Shirei Eretz Israel, the repertoire of the second wave (‘aliyah) of Jewish immigrants from Eastern Europe to Ottoman Palestine (c. 1904-1914). Shmuel Shapira published it as early as 1948 in his seminal collection of songs associated with the Zionist pioneers of that period.[10] In addition, the first section of this nign is very similar to the Israeli song “Or zaru’a la-tzadiq” (Psalms 97, 11: “Light is sown for the righteous, radianceOthers “joy.” for the upright”; see below Archival Recording no. 7) known also in Israel with the verse “Tov li, tov li torat pikha” (Psalms 119, 72: “I prefer the teaching You proclaimed than thousands of silver and gold pieces”; see below Archival Recording no. 3) and with the Yiddish text “Geyt arayn, geyt arayn, nekhumalakh” (“Get inside, get inside, consolation, into the Jewish soul”; see below Archival Recording nos. 3 and 4).[11]

The well-documented wide geographical spread of this nign and its many variants and permutations substantiate our suggestion that this is a melody belonging to the early stratum of the Hassidic repertoire.  The claim of the founder of the Chernobyl dynasty to have composed this nign and the assertion that this nign is a derivate of a melody that has been performed for over two centuries cannot be fully substantiated by historical evidence. Yet, its stylistic characteristics point to a period of crystallization prior to the penetration of Western tonal thinking (expressed mostly in chordal melodic motifs) and popular urban rhythmic patterns to the Hassidic repertoire in Ukraine.

(3)  “Toyv li, toyv li, toyras pikho” (Psalms 119, 72: "I prefer the teaching You proclaimed that thousands of ilver and gold pieces) and “Geyt arayn, geyt arayn, nekhumalakh” (“Get inside, get inside, consolations, into the Jewish souls”) performed with short explanation by Prof. Eliyahu Schleifer from a public lecture at the Van Leer Institute, Jerusalem, November 19, 2010. https://www.youtube.com/embed/97tPlJ_tuMA

(4)  “Geyt arayn, geyt arayn, nekhumalakh” (“Get inside, get inside, consolations, into the Jewish souls”) recorded on October 1, 1953 during Simhat Torah festivities at the Tze’irei Agudat Israel Synagogue in Tel Aviv. An example of a Hasidic nign performed by non-Hasidic Orthodox Jews in Israel. National Library of Israel, Sound Archive, Kol Israel Collection, K 02931, A, no. 5. Source: https://www.nli.org.il/he/items/NNL_MUSIC_AL003713972/NLI.

(5)  “Nign” performed by Rebbe Shalom of Nadvorna (Nadvirna in Western Ukraine; today in Brighton Beach, Brooklyn). In a conversation about this nign the Rebbe explains that Rebbe Tzvi Hirsh of Krecheniov used to sing in a slower tempo following the tradition of his grandfather Rebbe Eliezer Wolf. Source: Anonymous donor.

[6] See below; The Vizhnitz version, combining instruments and vocals, was published: Y. Mazor, The Hasidic Niggun as Sung by the Hasidim. 2 CDs (Anthology of Music Traditions in Israel, 17). Jerusalem: Jewish Music Research Centre, 2004, CD I, no. 4. In relation to this nign Mazor adds that it was sung at the Vizhnitz court in Grosswardein (Romania) before the Vizhnitz leaders immigrated to Israel. In this country, in the early 1950s, the Rebbe of Vizhnitz, R. Hayyim Meir Hager (1888–1972), instituted the custom of singing [it] at the Friday night Tish during the dance following the Grace after Meals

[7] Sh. Zalmanoff (ed.), Sefer Hanignim. Vol. 3, Kfar Chabad, Israel, 1980, no. 301. The Slonim version has not been documented yet, however it is known to the insiders of this community in Israel (interview with an anonymous Hasid by M. Lukin, Jerusalem, 2020; the name of the informant is kept in our records). Karlin Hasidim in Israel (including the old Karliner community of Tiberias) sang in the past this nign at the end of the Sabbath with the text of the piyyut Hamavdil bein kodesh le-hol.