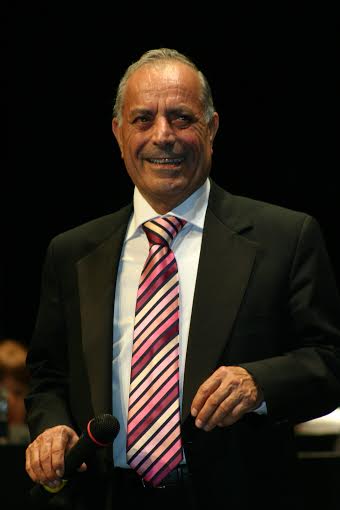 Aharon Amram was born in Sana'a, Yemen, in 1939. His father, Rabbi Shlomo Amram, worked as a messenger for the Av Bet-Din (chief of the courthouse), and officiated as the head of the psalm readers company. His mother, Romia, the daughter of a Rabbi, in addition to raising her own seven children, also took care of orphans, who were transferred to Sana'a, out of the fear that they would be converted to Islam. In his youth, Aharon Amram studied torah studies with Sana'a's best teachers, while also learning Math, History and Hebrew in a Jewish school.

In 1950, as part of 'Operation Magic Carpet' that was designed to bring Yemenite Jews to Israel, Amram and his family immigrated to the Land of Israel. Upon their arrival, they were put in immigrant camps in both Rosh Ha'ain and Ein Shemer. In school, his inclination towards music was noticed, and when he was fourteen, he participated, as a regular guest, on Sa'adia Damari's radio show, "Kol Yisrael Le'oley Teiman" (the voice of Israel for the immigrants of Yemen). As part of the show, he read weekly torah portions, recited Haftaras, and sang songs of rabbi Shalom Shabazi and some Israeli songs that he knew. Following this activity, he received a special scholarship for music studies from the head of the Knesset (Israeli parliament), Yisrael Yesh'ayahu, and went on to study in the music studio of Eli Korz in Tel Aviv, where he was taught vocal technique, Solfege, classical singing, etc.

When one of his teachers found out that Amram was practicing Yemenite singing while out of school and singing at weddings and Bar-Mitzvahs, she advised him to choose between Yemenite and classical singing because of the different vocal techniques. He chose Yemenite singing, and thereafter saw it as his calling in Israel to revive, preserve, and continue the Yemenite tradition.

Amram began performing at weddings in his town, Rosh Ha'ain, and across Israel, in places where there were Yemenite immigrants, and achieved the reputation of a talented singer. At the same time, he began recording and releasing records.

In 1961 he finished his military service, and was released, and started working as a guide in a youth center in Rosh Ha'ayin. Here, he established choirs and singing groups that gave concerts in several important concert halls in Israel. It was during this period that he got to know Sarah Mishriki, whom he would later wed.

In 1963, Amram joined Hapa'amonim dance group as a soloist for their European tour. They performed in countries such as Belgium, Holland, Spain, and France. The tour was a success and was critically acclaimed. Amram continued to perform with them as a soloist for the next seven years. At that time, Amram also performed abroad, at concerts organized by the Israeli foreign ministry. He performed with such acclaimed Israeli artists as Moshe Wilensky, Ilana Robina, Shoshana Damari and Yehoram Gaon, and appeard on French and Norweigan TV.

When he returned to Israel, Amram continued releasing records, which included some of his most well known songs, such as Im Nin'alu.[1] By the end of the sixties, he had written, composed, and recorded many singles that were later collected on his album, Levavi Yehshaka Ofra. By this time he had become a recognized figure in the Yemenite community.

In 1968 Amram and Sarah Mishriki got married, and had six children.

During the seventies, Amram recorded dozens of songs which became hits and are considered today to be authentic sources of Jewish Yemenite singing in Israel. The most famous of these is his song Galbi (see video example), composed and written by him. The song was made famous by Ofra Haza, who recorded a version that became popular in Europe. Other songs of his include various piyutim, such as Kirya Yefefiya, Dror Yikra, and Shuvi Yefefiya (written by by Shalom Shabazi and composed by Amram) (see in sound and video examples).

During the seventies, Amram continued with various musical activities. In 1972, together with Gorit Kadman, Amram established thirteen Yemenite dance groups. In 1973, he participated as producer and performer at the Boi Teiman festival. In 1975, he assisted in organizing a convention about the treasures of Yemenite Jewery; the book Moreshet Yehudei Teiman documented the convention. During the eighties, Amram recorded five more records, and was invited to various events across the world, such as a Cantors' convention in Italy, a concert in France, and many shows around the world with the Amkha dance company. Since the nineties he has been the Rosh Hashana cantor at the Yemenite synagogue in Manhattan.

After the Yom Kippur war, and later after the Lebanese war, Yemenite widows turned to Amram, requesting him to record Yemenite synagogue tunes, in order to preserve the Yemenite traditions, because their sons did not have fathers to teach them these traditions. Amram started this project at the beginning of the nineties. He recorded Ashmorot, prayers of Rosh Hashana and Yom Kippur, and started to research dozens of Tajs (Yemenite manuscripts of the Torah) in Israel, London, and New York, in order to affirm that the tradition he had studied and performed was exact. He went on to record the entire Torah, resulting in sixty CD's, released in a set called Vezot Hatorah (Eng. "and this is the Torah"). Amram did not think it would sell, but it did, and the Yemenite community was grateful.

Because of this success, Amram continued to record more Yemenite synagogue tunes. He recorded Kohelet, Megilat Ester, Tehilim, Shir Hashirim, the Hagadah, Sabbath tunes, and more, and released all of the prayers of the year, for Sabbath, weekdays and festivities. This unprecedented project was comprised of over 120 CD's.

During the research he conducted, Amram noticed many mistakes in the Taj manuscripts, especially in the later ones. He researched to find the correct versions, and finally published the Taj Vezot Hatorah, which was certified by rabbis and members of the Academy.

Due to a prohibition on playing musical instruments, which was recognized among Yemenite Jews, Yemenite singing was traditionally accompanied with only a can. However, on his albums, Amram used instruments like guitar, kanun, trumpet, trombone, and percussion to accompany his singing, and gave new form to Jewish Yemenite music.

He influenced many singers, including Rami Danokh, Ofra Haza, and Zohar Argov (who performed with Amran at the beginning of his own career).

Amram has been the recipient of many awards for his work, including an award from Keren Shabazi, the Art Prize of Sa'adia Damari, and an award of the Renanot Institute for his work in the field of cantorate, piyut and prayer. Amram is recognized as one of the main figures who worked to preserve the  Yemenite musical tradition.

[1] For further reading about this song, see Song of the Month.

The song Galbi, composed and written by Ahraon Amram. Performed by Ofra Haza.

Performance of Aharon Amram in a conference at Van Leer institute in Jerusalem (from 38:29).