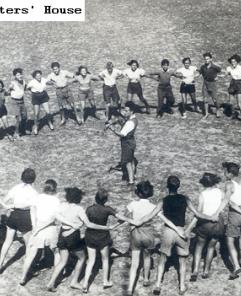 The word originates from Rumanian. As an ancient term it meant a circular folk dance. Later, it came to signify also a specific dance. The term is also used for two kinds of dance melodies in the Rumanian and Moldavian folklore: slow with triple meter, and fast with duple meter. The 'Hora' has a synonymous term: 'Juck,' although informants of Rumanian origin testify that Horah and Juck were used to signify two different dances. The Juck, which had acrobatical dance figures was comprised of two parts, slow and fast. These were accompanied by two melodies, the first with triple meter, and the second with duple.

Hora as a Klezmer Genre

The Jewish Klezmers adopted both kinds of genres and terms. The Juck was usually used to refer to the slow, triple metered Hora. This was favored by Klezmers and they began composing new Juck Niggunim (tunes). These were used mostly as marching tunes (in Yiddish: "Gas Niggunim"), and less for dance.1 The Israeli Klezmer Moshe (Musa) Berlin (b. 1937), who took his tunes from musical scores and records published in the U.S., used the term Rumanian Hora (see musical example below) for a pair of slow Hora and Freylekhs (see sound exmple no.1)2. The Rumanian Hora was meant for playing at the wedding feast, not during a dance, and sometimes during the mystical event during the night of Lag Ba'omer, which take place in Meron, next to Yohanan Hasandlar's grave. The Klezmers in Israel used the term Hora as a title for a fast dance tune but also as a specific name for two dance tunes (see sound example no.2).

The Hora dance in Israel

In the renewing Hebrew language, the term became a synonym to an Israeli circle dance, which was danced by youth movements and Zionist settlers in the second and third Aliyot (organized Zionist immigrations to Palestine) and has since become associated as the characteristic Israeli folk dance. The Zionists, who had the custom of communal singing of both Hassidic and Klezmer tunes, danced the Hora dance to them, until they became associated as Hora tunes.3 In time, Hebrew words were written for these tunes (such as the famous song Hava Nagila and Hora Hadera4)5. The Zionists settlers also sang Israeli folk songs with the Hora6, and indeed, many songs in the history of Israeli folksongs were written in the context of the Hora dance, such as Hora Medura, or Hora Seharhoret of Yoel Walbe. According to Ze'ev Walter Feldman, a musicologist and researcher of the "Ashkenazi Dance," the circular form and the marching style of the Israeli Hora, was adopted from one of the popular figures of the Freylekhs. Although, from watching videos shot in the twenties and thirties of the twentieth century, it can be seen that the Hora dance has gone through some changes over the years.

Students of the Zionists youth movements in Munkach dance Hora: the dancers sing two Hassidic tunes, one with the words "Yu La La"7 and the other is "Veal Yedey Zeh Yushp'a Shef'a Rav."8

In the second half of the twentieth century, Hassidic and Lithuanian Yeshiva students in Israel, who until then danced in a circle, in simple traditional marches, gradually accepted the Hora dance. Following their example, in some Hassidic weddings the Hora was also danced by the adults. Moshe Berlin, who knew the Hora dance from childhood, noticed the difference between the rhythmical character of this dance and the Hassidic circle dance. He fitted it with a medley of Niggunim from the instrumental repertoire of the Klezmers (which included the two Hora tunes mentioned above, instead of the varied repertoire that usually accompanied the wedding circle dances and included Hassidic tunes, neo-Hassidic tunes, and tunes from the Klezmer repertoire. Some of the Klezmers who were influenced by him, followed his example.

Hora at a Hassidic wedding: the video shows the Hora steps in a typical dance of teenagers, with a typical tempo.

See also Hora in the Lexicon of Klezmer Terminology (LKT).

1 However, Bergovski distinguish between Juck Niggunim and Gas Nigunnim (See: Bergovski, Instrumental Folk Music, 2001, p. 6, comment 17, and p. 9); and they appear separately in this mentioned anthology: Gas Niggunim- Nos. 61-78, and Juck Niggunim- Nos. 241-6. In the American repertoire, the term Juck was used as a title of a pair of melodies, the slow and the fast Hora.

8 Mazor-Hajdu, The Hasidic Dance- Niggun: A Study Collection and its Classificatory Analysis, no. 231.