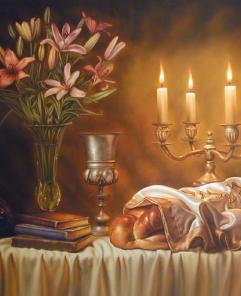 Kabalat Shabat refers to the part of the Friday evening service that precedes the regular Arvit prayer and welcomes in the Sabbath.

This prayer begins before darkness and in some conservative congregations, no later than a half an hour after sundown. The origin of this custom comes from the Mekubalim of Safed of the sixteenth century, led by the Ari, who used to leave the city in order to greet the Sabbath, while wearing white clothes and chanting Psalms.

The Sabbath's tractate in the Talmud (119a) describes rabbi Hanina who "robed himself and stood at sunset of Sabbath eve [and] exclaimed, 'Come and let us go forth to welcome the queen Sabbath."[1] Rabbi Yanai would also wear his clothes on Sabbath eve and say, "Bo'i kala, Bo'i kala." These two motifs would later appear in the piyyut "Lekha Dodi"  written by rabbi Shlomo Halevi Elkabats (see sound example).

The Kabalat Shabat ritual usually includes the reading and singing of the following:

There are several communities that begin the Kabalat Shabat with the reciting ofthe Song of Songs. In modern day Israel, the ritual of Kabalat Shabat has  extended beyond the religious communities and into secular circles as well, such as Kibbutzim, schools and kindergartens. In the United States, many Reform and Conservative synagogues usually postpone Kabalat Shabat until after darkness, in order for it to commence after the end of the business day.

See also Kabalos-Shabos in the Lexicon of Klezmer Terminology (LKT).

Kabalat Shabat refers to the part of the Friday evening service that precedes the regular Arvit prayer and welcomes in the Sabbath...

For cantor (Baritone or tenor), mixed chorus and organ.