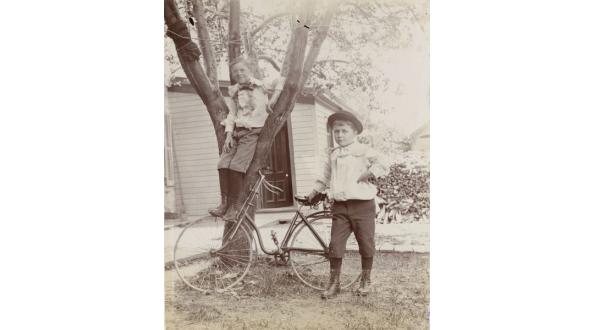 "Moyshelekh and Shloymelekh" is a name referring to two different Yiddish songs, "Unter Di Grininke Bymelekh," and "Unter Di Poylishe Grininke Beymelekh." Both songs open with almost the same line, containing the words "Moyshelekh, Shloymelekh," and are thus remembered under this same title. But they are quite different songs, with half a century and the Holocaust separating their time of composition. The "Song of the Month" of March will be dedicated to the earlier one, "Unter Di Grininke Beymelekh."

The children song “Unter Di Grininke Bymelekh” (Beneath the Little Green Trees) was written by Haim Nachman Bialik and composed by Platon G. Brounoff  (Elizavetgrad, Russia 1869 – New York, 1924). Bialik's poem was first published in 1901. Brounoff composed two melodies for this song, one published in 1905, and the second one, which is presented here, in 1914. Judging by its many performances and multiple versions, "Unter Di Grininke Beymelekh" was a very popular song throughout the Jewish world. It attained the status of a folksong, as seen in some recordings and citations, in which the composer is marked as "Folk," and only the name of the famous poet is remembered. The song was translated into Hebrew by Aharon Ashman.

Bialik's words describe Jewish children playing in the village. They are so gentle and tender, that they could be carried off by the slightest breeze. He draws special attention to the thoughtful eyes of the Jewish children, always gazing and pondering the world.

Brounoff's melody is simple and corresponds to the text in tight phrasing: It is strophic in structure and has two stanzas, each containing eight lines. Each line has eight syllables, which are sung in a syllabic manner. In the Yiddish version, each line (except two) ends with the same rhyme– 'ekh.' The range of the melody is of a major 7th, but stays mostly within the range of a fifth.

The structure of the song is very clear. Each line is fitted with two bars in the music, and has the same rhythmic pattern (except the fifth line). The last line is repeated with different music, the repeat serves as coda. If we take the repetition out of consideration, we see a structure called 2n, going from the small unit of one bar, to a unit of two, four, eight and sixteen bars. The sixteenth bar ends with an open cadence on the dominant, thus preparing for the coda which completes a full authentic cadence.

The harmony stays simple as well. It is in a minor scale giving this song a gloomy atmosphere and attaching to the lyrics a sense of sentimentality. Except bars 9-12, corresponding to the fifth and sixth lines in the text, the harmony utilizes only the first, fifth and fourth degrees of the scale. The above mentioned bars have a short modulation to the parallel major scale; it is a sudden change in the harmony which fits to the change in the recurring rhythmic pattern.

The melodic material, structure and harmony all show simplicity and clearness. Put together, they turn this song into a very catchy and easy one to remember, as a children song ought to be. But despite its catchiness, the music maintains the beautiful and nostalgic air of Bialik's words.

The picture is from http://www.flickr.com/photos/whsimages/, under "cc" license.

The song was recorded in Jerusalem (2001/2002) by Polina Ainbinder (voice) and Svetlana Ainbinder (piano and voice), the Ainbinder Sisters Duo, with arrangement by Svetlana Aibinder. It is presented here courtesy of the artists. 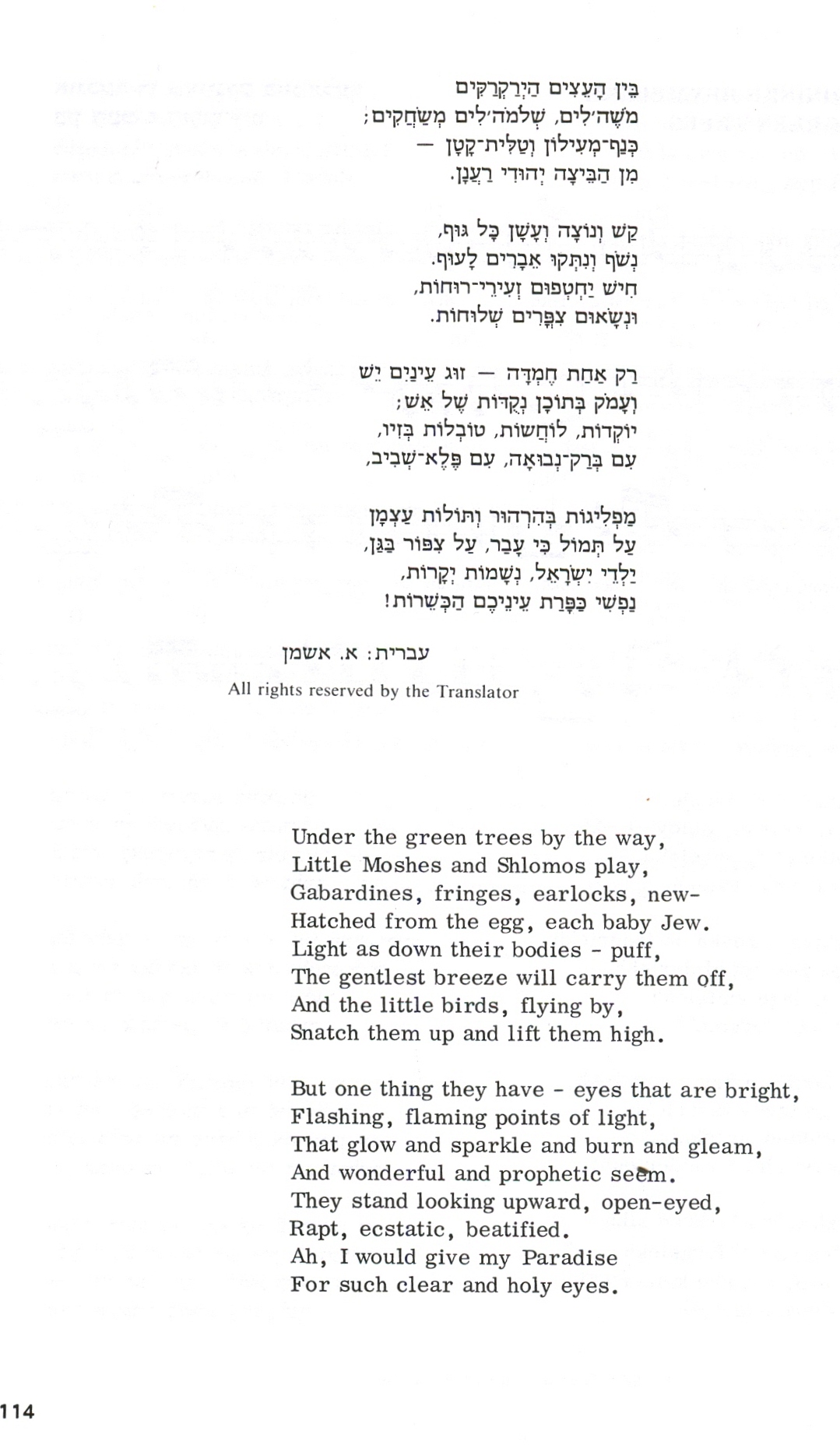 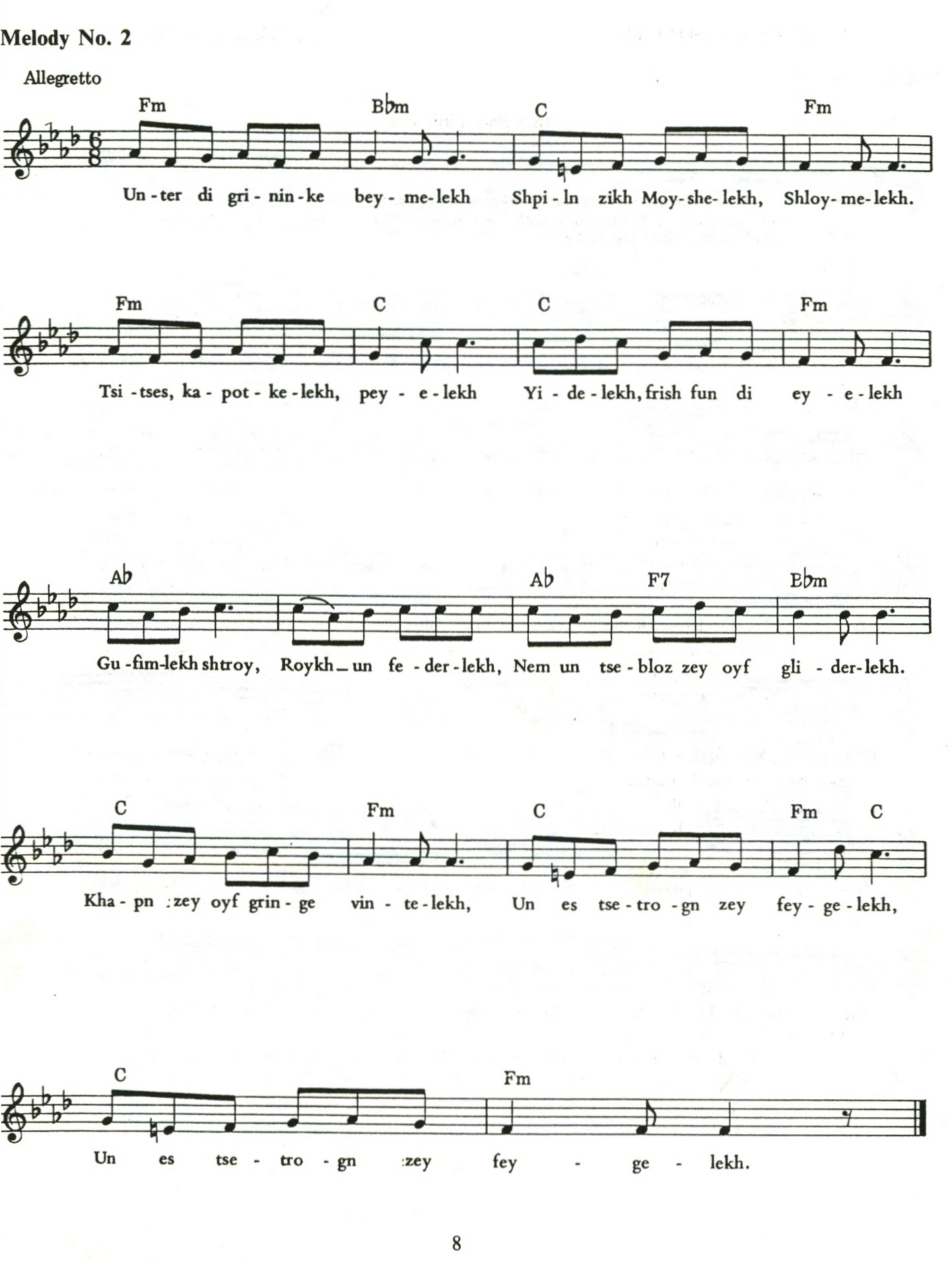