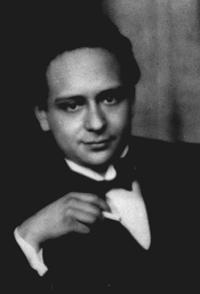 Viktor Ullmann was born in Teschen (now Český Těšín), Czech Republic on January 1, 1898. Ullmann’s father was an officer in the Austrian Imperial Army stationed in Teschen.  In 1909, the Ullmann family moved to Vienna, and Viktor began studying music theory with Dr. Josef Pohlaneur. In 1918, Viktor enrolled at the Vienna University as a law student, supplementing his studies with private piano lessons with teacher Edward Steuermann.  That same year, he joined Arnold Schoenberg’s composition seminar, through which he became acquainted with Alexander von Zemlinsky. In 1920, Zemlinsky offered Ullmann the position of chorus master and répétiteur at the German Theater in Prague. Initially Ullmann’s duties were restricted to vocal coaching, but after one year, Zemlinsky expanded his responsibilities to include conducting. From time to time, Zemlinsky recruited Ullman’s help for large productions staged by the German Male Choral Society. In addition to his work at the theater, Ullmann debuted several of his early compositions including, Sieben Lieder with piano (performed 1923), the Octet (1924), his incidental music for Klabund's Kreidekreis (1925), and the Symphonische Phantasie (1925).

In the fall of 1927, Ullmann took a short-term engagement as musical director in Usti nad Labem (now Aussig). After one season, Ullmann moved to Prague, but was not successful in securing a post during his first year of residence there. During the years 1929-1931, Ullmann worked at the Zürich Schauspielhaus as a conductor and composer of indicental music. It was during this time that Ullmann became involved in Rudolf Steiner's anthroposophy movement, and subsequently ceased all musical activity for two years in order to run the anthroposophical bookstore Novalisin Stuttgart.

In 1933, Ullmann returned to Prague and his life as a freelance musician. In addition to teaching and to his work as a music critic, Ullmann became involved in Leo Kestenberg's Internationale Gesellschaft für Musikerziehung as well as several other music societies based in Prague. Beginning in 1935, Ullmann began studying quarter-tone composition under the guidance of Czech composer Alois Hába. In 1934, Ullmann was awarded the Hertzka prize for his piece Schoenberg-Variationen, originally compsed in 1925, and newly arranged for Orchestra. Two years later, Ullmann received the same prize for his opera Der Sturz des Antichrist, but after serval failed attempts to debute the work in Vienna and Prague the opera was left unstaged.

On September 8, 1942, Ullmann, along with his third wife Elizabeth, were deported to Terezín. For a short time, he lived near his two previous wives and one of his sons, who had been sent to Terezín in an earlier transport. Ullman’s two children from his second marriage mannaged to escape to Sweden and then to England in one of the few humanitarian transports permitted by German officials.

Ullmann quickly became one of the leading figures in the camp’s musical life. He was active in Terezín during a time when musical and cultural activity was officially promoted by Nazi officials. As such, he was assigned to the Administration of Free Time Activities (Freizeitgestaltung) as a music critic and organizer of musical rehearsals. Luckily, many of his critiques of performances and individual musicians were preserved, shedding light on the culture and participants of the musical life in Terezín. Ullmann’s light work load through the Freizeitgestaltung enabled him to focus his energies elsewhere. In addition to his formal duties, Ullmann organized a large number of concerts under the auspices of the “Studio for New Music,” an informal group that he founded to support musicians interned in Terezín, and to give public performances of their work.

The years 1942-1944 marked Ullmann’s most prolific compositional period; he produced sixteen known compositions and an additional four that are believed to be either lost or incomplete. His Terezín corpus includes: String Quartet no. 3 (1943); Sonatas no. 5-7 for Piano (1943-44); Der Kaiser von Atlantis (1943); Three Songs for Baritone and Piano; Herbst for Voice, Violin, Viola and Cello (1943); Der Mensch und sein Tag for Voice and Piano (1943); Two Chinese Songs (1943); Hölderlin Leider (1943); Brezulinka—Three songs for Voice and Piano; Wendla im Garten for Voice and Piano (1943); Abendphantasie for Voice and Piano (1944); Immer in Mitten for Mezzo-soprano and Piano; Chansons des enfants françaises (1943). This list, while incomplete, gives us an impression of Ullman’s immense compositional productivity in Terezín. Due to the scarcity of scores in the camp, Ullmann’s corpus represented a huge resource of potential performance repertiore. Luckily, Ullman’s Terezín manuscripts were preserved by Professor Emil Utitz who gave them to H.G. Adler after the war.

Ullmann’s interest in Jewish themes peaked for the first time in Terezín, motivating him to compose a number of Hebrew songs for the various choruses active in the camp.  Ullmann’s largest scale work produced in Terezín is undoubtedly his opera Der Kaiser von Atlantis, scored for five singers and a thirteen-member orchestra. The premier was to take place in the fall of 1944 at the “Sokolovna” gymnasium, but was never staged due to the heavy deportations to Auschwitz in October of that year. Ullmann himself was transfered to Auschwitz on October 16, 1944 in one of the mass liquidation transports, and died in the gas chamber two days later.

Viktor Ullmann was born in Teschen (now Český Těšín), Czech Republic on January 1, 1898. Ullmann’s father was an officer in the Austrian Imperial Army stationed in...