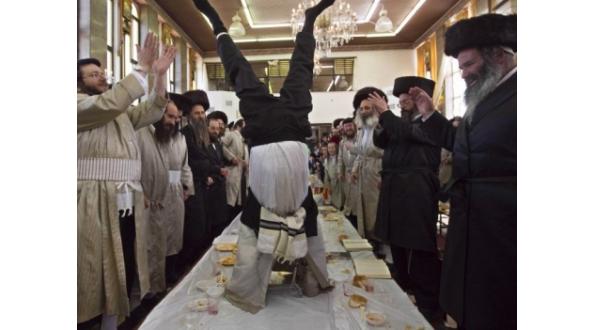 Not many piyyutim for Purim are extant, and “Purim, Purim, Purim lanu” (“Purim, Purim, Purim for us”), written by Rabbi Yosef Shalom Gallego who was born in Saloniki (then part of the Ottoman Empire) in the last third of the 16th century, is one of the most popular among them. Around 1614, Gallego arrived to Amsterdam where he was invited to serve as hazzan (cantor) of the flourishing Portuguese Jewish community. In this city, he taught the Oriental Sephardi liturgical tradition of his native Saloniki. In 1628, he published the compendium of piyyutim “Imre no’am” (After Proverbs 16, 24) which was widely distributed and played an important role in the dissemination in Western Europe and North Africa of the “new” style of religious Hebrew song that developed in the 16th century in the Land of Israel, Turkey and Greece. Through this collection, the Western Jewish communities became familiar with the songs of Rabbi Israel Najara (ca. 1550-1625) and his followers.
This popular song consists of quatrains of short verses with the rhyme pattern aaax, bbbx, cccx, etc. (known as the zejel pattern). The “x” verses consist of short biblical quotations all rhyming on “anu” and thus recalling the opening verses “Purim, Purim, Purim lanu / barukh asher bahar banu” (“Purim, Purim, Purim for us / blessed be He who chose us”) that function as a refrain between the stanzas. The text displays the history of the injunction imposed on the Jews of Persia and their salvation by Esther and Mordecai, stressing the popular joy for the miraculous turn of events.
It is worth pointing out that in its form, content and general spirit, this Hebrew song strongly recalls songs for Purim in Judeo-Spanish (Ladino), known as Coplas de Purim. It can be assumed that when composing his Hebrew poem for Purim, Gallego had in mind this Ladino genre which he certainly knew from Saloniki.
Several melodies were adapted to “Purim, Purim, Purim lanu” by the Jews of North Africa, the Middle East and Central Asia. The present version, performed by the most distinguished Bukharian Jewish cantor Ezra Malakov from Queens (New York), is one of the better-known today. It was recorded by Abraham Zvi Idelsohn among the Bukharian Jews who settled in Jerusalem around the beginning of the 20th century. He published a transcription of the song in volume 3 of his Thesaurus of Oriental Hebrew Song, published in 1922, and is dedicated to the musical traditions of the Persian, Bukharian and Daghestani Jews.