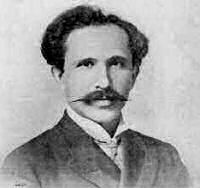 Morris Rosenfeld, born as Moshe Jacob Alter in 1862 in Stare Boksze, in Suwałki County, part of Russian Poland. Morris came from a family of fishermen. He was educated at Boksha, Suwalki, and Warsaw, where his family moved in 1876. He married Asna Beile and was the father of two daughters, Freidel and Reisel and a son, Yosef. As the situation grew more dire in Poland, Rosenfeld left to earn a living abroad. After working in Amsterdam as a diamond cutter and in London as a tailor, he emigrated to New York in 1886, where he would also work as a tailor.

Notwithstanding his professional occupations, Rosenfeld began writing poems. Rosenfeld was a staunch socialist and socialist values were reflected in his poems. In 1888 he published his first poem, "Di Gluke" ("The Bell"), followed by "Di Blumenketete" ("Bouquet of Funeral Flowers"). His poems were translated to English and were published in 1898 in the book "Songs from the Ghetto". The first edition sold out, and the book was soon translated into six languages. Following this success, he left his work as a tailor and was connected with the editorial staff of several leading Jewish newspapers. In 1904 he started publishing a weekly entitled "Der Ashmedai". In 1905 he was appointed editor of the "New Yorker Morgenblatt". He was also the publisher and editor of a quarterly journal of literature (printed in Yiddish) entitled "Jewish Annals". Rosenfeld was considered as the "poet of the labor movement," and his poems were sung by many workers at this time. His poems shed light on the living circumstances of emigrants from Eastern Europe in New York's tailoring workshops. His poems were usually full of despair and gloom, which reflected the living conditions of the Jewish workers at that time. His poems were published, under the title "Gesammelte Lieder", in New York in 1904.

Rosenfeld was a delegate to the Fourth Zionist Congress at London in 1900 and gave lectures at Harvard University in 1898, and at the University of Chicago in 1900, as well as in Wellesley and Radcliffe colleges in 1902.

Morris Rosenfeld, born as Moshe Jacob Alter in 1862 in Stare Boksze, in Suwałki County, part of Russian Poland. Morris came from a family of fishermen. He was...

Music in Jewish History and Culture

A survey of Jewish music from Biblical times to the present that compiles a great amount of selective data without offering in-depth insights into the social context in which the music is created...

Ph.D. dissertation (location at the Music Dept. of the Israeli National Library: JMB 2843)