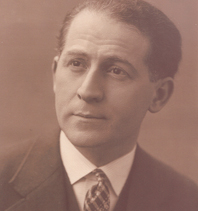 Composer Leon Algazi was born in Iepuresti,  in 1890. He studied music in and and graduated from the Ecole Rabbinique in . His first teaching post was at the Ecole de Liturgie et de Pedagogie in , a position he held for many years. His interest in Jewish music and folklore was sparked by early studies with musicologist Abraham Zvi Idelsohn. One of his first projects in the field was a nationally aired radio program that dealt with a wide range of topics in Jewish music. In 1937 he took a position as the conductor at the grand Rue de la Victoire Synagogue in . Algazi helped to establish the “Mizmor” section of the Salabert publishing house, under which he released many of his compositions such as Quatre Mélodies Judéo-Espagnoles and Psaume XXVII. In 1958 he published an important collection of Sephardic folk songs and texts, Chants Séphardis, under the auspices of the World Sephardi Federation in . In addition to his other teaching commitments he worked as a professor of Jewish music at the Schola Cantorum, and finally in 1961 was appointed the director of the of the Paris Consistoire.