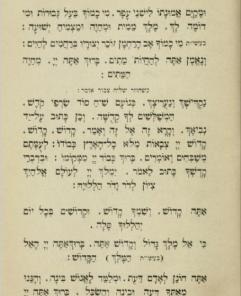 A responsorial prayer segment from the third benediction of Hazarat Hashatz recited by the cantor and the congregation. The word "Kadosh" (holy) and its declensions form the crux of this benediction, and hence its name, Kedusha.

The central part of the Kedusha is based on three biblical verses from the prophecies of Isaiah and Ezekiel:

At the beginning of the second millennia, a variety of verses was added to these three verses. Some of the additions were adopted by all of the Jewish communities, while some only by a few.

Although the prayer is mentioned in the Talmud, the text itself is not cited. This might be due to the fact that the basic text had already been revised during the Tana'im era, if not earlier, and therefore the Amorai'm did not consider it necessary to repeat it. Naturna'i Ga'on (who lived during the second half of the ninth century) opposed any changes to the Kedusha text, except those that were set by the Mishha and Talmud scholars.

There are three kinds of openings to the Kedusha prayer:

1. "Na'aritsakh venakdisakh…"(We will reverence and sanctify thee according to the mystic utterance of the holy Seraphim, who sanctify thy Name in holiness, as it is written by the hand of thy prophet…"). This opening was preserved by the Sephardic, Italian, Persian, and Yemenite Nussahs. It is based on Isaiah 29, 23, and is used in the Shaharit and Minha prayers during weekdays, Sabbaths, and festivals. In the Ashkenazi and Egyptian Nussahs it is read in the Musaf prayer. See sound example 1.

2. "Keter yitno lekha… ("Unto Thee, O Lord our God, shall the heavenly angels above, with Thy people Israel assembled beneath, ascribe a crown; all shall repeat thrice with one accord the holy praise unto Thee, according to the word spoken by Thy prophets…") Sephardies, Italians, Romanians, Yemenites, and Chassidim use this opening for the Kedusha benediction of the Musaf prayer. See sound example 2.

3. "Nekadesh…" (We will sanctify Thy Name in the world") introduces the Kedushot in Ashkenazi rite in both the Shaharit and Minhah services on weekdays, Sabbaths, and festivals.. Ashkenazis use this opening in the Minha and Shaharit prayers during weekdays, and in the Minha prayer during holidays.

The main section of the Kedusha has also gone through changes and additions. The most important of which is the addition of "Shma' Yisra'el" to the Mussaf of the Kedusha. This addition originated in the sixth century CE. During that period, in the Byzantine Empire, Jewish communities were persecuted and were prohibited to recite the Shma Yisra'el prayer in the synagogue. The solution for this decree was to "conceal" the reciting of the Shma' inside the Kedusha. However, according to the Ramban and, following in his footsteps in the Yemenite Nussah, Shma' should not be said during the Kedusha. The rest of the Nussahim, on the other hand, kept this custom.

From a musical perspective, the Kedusha does not have a unique melody. However, in the Ashkenazi Nussach of Eastern Europe, for example, there is a tendency to perform the first Kedsuah in a minor tonality and the second Kedusha in a major. Furthermore, during the Yamim Nora'in, the Kedusha is sung in the intonation of "Shma Yisra'el" and "Hakohanim."

In general, the "Kedusha" is left to the consideration of the cantor or the synagogue's composer, whose inclination would be to create a festive and serious melody in accordance with the text. The early cantors' manuals contain many ornamented musical examples to the word "Na'aritzekha," in which the cantor may use while saying the "Kedusha."

Salamone Rossi composed a "Kedusha" for four voices, which appears in his book Ha-Shirim Asher li-Shelomo (1622). He wrote the music according to the Sephardic Kedusha (see opening No. 2), and it was later revised by Samuel Namborg in his additions to Ha-Shirim Asher li-Shelomo (1877), in order for it to suit the Ashkenazi Kedusha (see opening No. 1).

[1] Translations of Kedusha from Encyclopedia Judaica.

A responsorial prayer segment from the third benediction of Hazarat Hashatz recited by the cantor and the congregation. The word "Kadosh" (holy) and its declensions form the crux of...

Collection of original compositions and arrangements for the Rosh Hashanah Service.

Collection of original compositions and arrangements for the Yom Kippur Service.