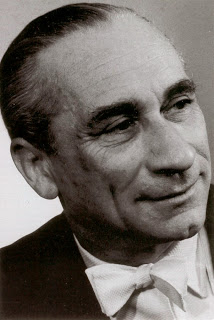 Conductor, active in the musical life of Theresienstadt (Terezín)
1908-1973

Karel Ančerl, conductor, born April 11, 1908 in Tučapy (Southern Bohemia). Karel Ančerl studied conducting and composition at the Prague Conservatory of Music. After graduating in 1929, Ančerl worked for Hermann Scherchen as a vocal coach at the Munich Opera House. He went on to conduct the orchestra in the Liberated Theater in Prague and from 1933-1938, worked as a sound engineer and conductor at the State Radio in Prague.  During his first year at the State Radio, Ančerl enrolled at the Master School in Prague to study conducting under Professor Václav Talich.

Shortly after his arrival to Terezín in 1942, Ančerl embarked on a project to assemble the camp's first string orchestra. Although instruments were scarce in Terezín, he managed to organize an ensemble comprised of sixteen first violins, twelve seconds, eight violas, six cellos, and one double bass. The young and talented violinist Karel Kröhlich was chosen as concertmaster, seconded by veteran violinist Egon Ledeč. Terezín’s music critic Victor Ullmann wrote the following review of Ančerl upon the début of Pavel Haas’ Study for a String Orchestra, which he conducted:

"Karel Ančerl is a conductor of caliber and impressive know-how.  It is a proof of his qualities and also his super-human patience that in heroic labor he welded together and brought up this music body [the Terezín String Orchestra].  As a conductor,  Ančerl reminds one of Talich and Hermann Scherchen; like the latter, he was and is a pioneer of new music as well, and so he succeeded in presenting a very beautiful and inspiring premiere: Pavel Haas’ Study for a String Orchestra."

While Ančerl’s initiative was the first of its kind in Terezín, by 1944 there were an additional four orchestras, and several smaller ensembles active in the camp. Ančerl’s string orchestra flourished until October of 1944, when Ančerl and the majority of the musicians he conducted were deported to Auschwitz.  He was the only member of his family to survive.

After the war, Ančerl returned to Prague and was offered a position as conductor of the Prague Opera house.  In 1947, he accepted a post as conductor of the Czech RSO.  From 1950-1968 he conducted the Czech Philharmonic Orchestra, during which time he toured extensively throughout Europe, North America and Asia as a guest conductor.  In 1958, Ančerl was awarded the Czechoslovakian State Prize for conducting and was named the National Artist in 1966. In 1969, Ančerl left Czechoslovakia for Canada to succeed Ozawa as music director of the Toronto Symphony Orchestra, a post he kept until his death in 1973. Ančerl's discography is extensive, covering a wide range of composers, such as Mozart, Rachmaninov, Janacek, Smetana, Dvorak and others.