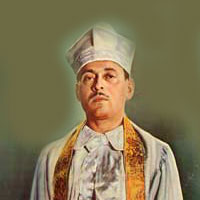 Joseph Shlisky was born in Ostrowiec Voivodeship, Poland, around 1894. As a child, he sang in the choir of the local synagogue. A cantor from a neighboring village heard the boy, aged somewhere between seven and 14, and decided he needed the voice for his choir. According to the narrator, the cantor promised Shlisky’s parents to train their boy in liturgical song and take him on tour to London, England. Instead, the cantor spirited Shlisky and six other boys away to Toronto. When Shlisky, unfamiliar with geography beyond the immediate surroundings of his village, disembarked at Union Station after a 14-day sea voyage and an overnight train trip, he was still certain he’d arrived in the British capital.

At the turn of the 20th century, the Jewish community in Toronto grew, synagogues flourished, and hazzanut began to prosper as an art. Like elsewhere in North America, Toronto synagogues looked to Eastern Europe to recruit a cantor and his choir, knowing that a well-regarded cantor increased the synagogue’s prestige in the community, and attracted new congregants. Shlisky never mentioned the name of the cantor who brought him to Toronto. But, in interviews, Shlisky offered only that upon his arrival in Toronto, he was part of the choir at Goel Tzedec Synagogue, suggesting that the cantor had come to assume choirmaster duties there.

Shlisky’s early years in Toronto were not easy. The cantor, who Shlisky described as “a miser,” took rooms for them in a house not far from the synagogue, in the heart of The Ward, the city’s bustling, growing Jewish district. As a soloist in the cantor’s choir, Shlisky was paid a pittance. Shlisky was homesick and suffered some difficulties of adjustment. Shlisky hadn’t spoken a word of English upon his arrival, but within five months, after attending the McCaul School, he could speak with reasonable fluency. Decades later, he still had fond memories of the school, which had predominantly Jewish pupils. Shlisky eventually left the cantor’s employ either of his own accord or because his voice changed as a teenager, and he was no longer useful. He found himself in dire straits and had to work at odd jobs. Eventually, he found a home with one of his uncles, who had emigrated to Toronto.

In about 1910, at only 16 or 17 years of age, Shlisky married Minnie Rinzler, a Romanian-born immigrant. Two daughters, Pearl and Helen, were soon born to the couple, followed by a son, Norman, and another daughter, Natalie. At this time Shlisky settled into a job at the sprawling Eaton’s factory complex as a means of support.

Shlisky never heard a note of Western music until his rise, but joined the Toronto Waves Association in 1914, and left it after a short time. He never thought about a musical career until, one day, he was singing at his sewing machine when Lady Flora McCrea Eaton happened to pass by on a factory inspection tour in about 1914. Lady Eaton, herself a musical enthusiast and vocal performer, was distinctly impressed by the young tailor’s voice. When she heard that he’d had to forsake his musical ambitions to make ends meet for his family, she offered to pay for his musical education at the Toronto Conservatory of Music (TCM), run by her friend Dr. Augustus S. Vogt. During his years at the TCM, Shlisky either continued to perform or returned to performing in the synagogue.

Shlisky soon established a local reputation as a featured soloist, performing at recitals and fundraisers for the war effort attended by the city’s Anglo-Saxon Protestant gentry as well as its established Jewish families. He delighted audiences with songs that would remain at the core of his non-liturgical repertoire throughout his career, including Gounod’s Lend Me Your Aid.

In March 1919 Shlisky performed his New York debut, at the Aeolian Hall. The audience was enraptured by his voice, and the Manhattan press anointed him one of the best young singers of the day. Shlisky’s star continued to rise as a mainstream artist, with repeat appearances at Massey Hall, Toronto, and New York’s Carnegie Hall over the next few years. Nevertheless, he never really abandoned the cantorial arts.

His recital programs over his career were typic. To showcase his vocal versatility, he performed operatic arias from a variety of schools—Italian, Russian, and German. He also performed his signature rendition of Handel’s Sound an Alarm and a series of Yiddish or Hebrew songs. While these may have been folk songs, Shlisky was also known to perform traditional hazzanut songs on the concert stage, including Al Hatzadikim, Omar Raboeliozor, Misrutze Brachamin, and Tikants Shabbos.

In 1920 Joseph heard that the Slonimer Synagogue was looking for a Chazan for the Yamim Noraim and he went to the Synagogue's president to audition. he got the position and remained at that Synagogue for two years. Over his cantorial career, Shlisky served at several synagogues in the five boroughs, including the First Roumanian-American Congregation on the Lower East Side, Kol Israel Anshe Poland in Harlem, the Talmud Torah Toras Moshe in the Bronx, and Brooklyn’s Shaare Tefillah. New York’s Lower East Side was the epicenter of the world hazzanut community. Young cantors came to the neighborhood’s synagogues to apprentice with the giants of the field, like Yossele (Joseph) Rosenblatt.

Shlisky was signed up to appear with the San Carlo Opera Company but, like many other outstanding Chazanim. Eventually, he declined because it would have entailed him breaking Shabbat and Yom Tov.

Shlisky recorded extensively in the 1920s, though only a few of them were liturgical, like Hineni Heoni Mimaas (I Came Before or The Hazzan’s Prayer), Av Horahamim (Father of Mercy), Mizmor L’Dovid (Psalm 29), Ashrei (Psalm 145), and Haben yakir li (My Darling Son). Distributed across the Jewish world, the records increased Shlisky’s fame. He also appeared regularly on the radio, and in at least one major film—along with Rosenblatt, David Roitman, Joseph Shapiro, and other hazzanut superstars. Shlisky sang in Kol Israel (The Voice of Israel) (1931), which dramatized important events in Biblical and Jewish history followed by cantorial performances.

Shlisky brought his parents over to live with him in the USA. He is known for his generosity, and often performed at fundraisers and benefit concerts for charitable organizations. In remembering his difficult journey to Canada, he proved willing to directly assist hazzanim newly arrived from the Old World.

At the height of his fame and powers as a cantor, after Pesach 1934, Shlisky’s singing career was cut short by a sudden, debilitating stroke that robbed him of his ability to sing. He lived out his days as an invalid until his death, of a cerebral hemorrhage, on February 14, 1955.

For Shlisky's records in the National Library site.

Kevin Plummer, "Historicist: Torn Between the Synagogue and the Concert Hall", in Torontoist (December 13, 2014)

Joseph Shlisky was born in Ostrowiec Voivodeship, Poland, around 1894. As a child, he sang in the choir of the local synagogue. A cantor from a neighboring village...

Kwartin’s improvisations on traditional synagogue melodies were recorded and transcribed for the three volume collection, Zemirot Zevulun, which was released in two parts; the first two volumes in...

A selection from Salamone de Rossi's Ha-shirim asher li-Shelomo arranged as a service for cantor, chorus, and organ. Words in transliterated Hebrew.