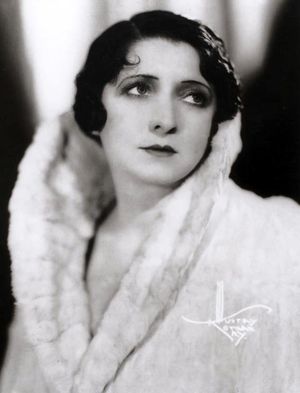 Yiddish theater star Jennie Goldstein was born in in 1896. She began acting at the age of six, playing child roles opposite actor greats Bertha Kalish, Keni Liptzin, and David Kessler. Goldstein’s childhood and early adulthood revolved around the Yiddish theater; by the age of sixteen she was already running her own theater with her husband, Max Gabel.

Gabel, a renowned playwright and producer in his own right, wrote numerous roles for Goldstein, who became known for her dramatic portrayal of Gabel’s heroines. Throughout her career, Goldstein recorded a number of songs that were released on album, such as “Jennie Goldstein Sings 14 Famous Yiddish Theater Hits,” “Ir Mames Khupe Kleyd,” “The Best of Yiddish Vaudeville Vol. 2,” and many more.

In the span of her recording career, Goldstein collaborated with some Yiddish theater’s greatest actors and composers, such as Molly Picon, Isador Lillian, Abe Schwartz, and Abe Ellstein. In 1938, Goldstein made her film debut, playing the leading role in the Yiddish movie Two Sisters (Tsvaye Shvester). Late in her career, Goldstein appeared in two Broadway productions: The Number (1952), and Camino Real (1953).

Yiddish theater star Jennie Goldstein was born in in 1896. She began acting at the age of six, playing child roles opposite actor...

Yiddish actress and singer Regina Prager was born in Lemberg ca.1866. Prager began her stage career at Yankev Ber Gimpel’s Yiddish Theater, where she quickly became one of the forefront...

Salcia Weinberg (Shure Licht) was born in 1878 in Przemysl, Austro-Hungarian Galicia. Like Prager,...