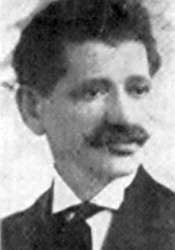 Isaac Schlossberg is a composer and conductor. He was born in 1877 in St. Petersburg to a family of hereditary cantors. His grandfather, Nathan Schlossberg, and his father, Arie-Leib Schlossberg (also known as Leibke Aluxter) were cantors.

He studied music and the basics of khazanut in Vilna under the guidance of cantor Kogan and choirmaster Moshe Dorguzhansky, in whose choir he was a singer. His fellow practitioners were Yosef Rumshinsky, as well as Lokeshker (later a famous tenor) and Edelman (later cantor in one of the Viennese synagogues). At the age of 13, Schlossberg became an assistant to Dorguzhansky and for the first time conducted the Grand Choir of the Vilna Choral Synagogue. Later he entered the Warsaw Conservatory.

In 1899, together with Leo Liov, he wrote music for a play based on Joseph Lateiner's play "Khurban Yrushalayim" ("The Destruction of Jerusalem") by the troupe of the Jewish theater Avrum-Olter Fishzon. Later, for several years, Schlossberg toured Russia but eventually settled in Warsaw, where he worked as a composer and conductor of the leading Jewish theaters: "The Rock", "Novosti", and the Kaminsky troupe. In total, he composed music for 80 operettas and musical performances: "Hanka" (1914) by the Kaminsky troupe; "Malvinke wil azoy" ("So Malvinka Wants") (1916) by the Pantheon Theater in Lublin; "Di Shane Bertha" ("Belle Bertha") (1916) at the Bolshoi Theater in Lodz; "Tsvey kets in ein zak" ("Two cats in one bag") (1922); "Der Call" (1923) of the Central Theater, and more.

In 1919, after Leo Liov left for the USA, he was for a short time choir director of the Great Warsaw Synagogue.

His wife, Sonya, and two daughters, Manya and Liza, were actresses of the Jewish theater.

Isaac Schlossberg is a composer and conductor. He was born in 1877 in St. Petersburg to a family of hereditary cantors. His grandfather, Nathan Schlossberg, and his...

Louis Lewandowski was born in Wreschen, Poland in 1821. At the age of thirteen, as a result of his mother’s death and family’s extreme poverty, Lewandowski moved to Berlin...