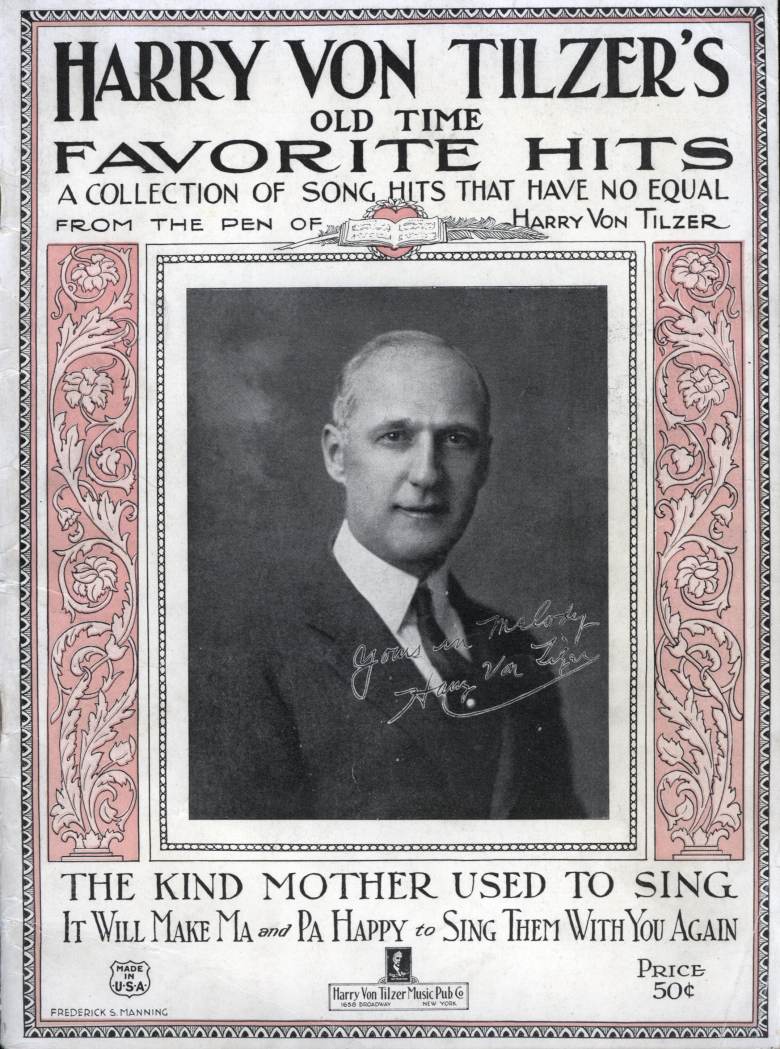 Harry Von Tilzer (originally Gumm or Gummblinksy), was born in Detroit in 1872. His passion for music became evident at an early age, and at fourteen he left home to join the Cole Brothers Circus as an acrobat and singer. Tilzer’s parents soon brought him home, but his love for show business was still strong. A year later, he left home for Chicago, where he became an actor, pianist and composer in a small local theatrical troupe. It was at this point that he adopted the stage name Von Tilzer, an artistic embellishment of his mother’s maiden name Tilzer. During his time in Chicago Von Tilzer began to dabble in song composition. He published his first song, “I Love You Both,” in 1892 with the support of Willis Woodward.

Von Tilzer decided to relocate to New York City to pursue a career as a songwriter. His productivity was immense during his first years in the city; he composed a great number of songs that spanned a wide spectrum of styles and forms. Slowly, Von Tilzer began to gain recognition. Von Tilzer supported himself through song sales and gigs at a local vaudeville salon. An important break came in 1898, when Von Tilzer became acquainted with an up-and-coming lyricist named Andrew B. Sterling. The two musicians became good friends and roomed together in a small room on E. 15th Street near the Brooklyn Bridge. The two collaborated on a song, "My Old New Hampshire Home," which they sold to a local printer named William C. Dunn, who managed the Orphean Music Company. The song was an instant hit, and sold over two million copies. Long before Dunn realized the enormous profit potential of Tilzer and Sterling's song, he bought another Tilzer song, "I'd Leave My Happy Home for You," which ended up selling almost as many copies.

Shortly after Dunn's collaboration with Tilzer, he sold his publishing company to Lew Bernstein and Maurice Shapiro. The new business owners realized Tilzer's potential, and with an offer of $4,000 in royalties for the song "My Old New Hampshire Home," secured him as a songwriter for their newly acquired publishing company. Tilzer quickly advanced in the company, first to position of staff songwriter and then junior partner. Tilzer's next big hit came in 1900 with "A Bird in A Gilded Cage," lyrics written by Arthur Lamb. That same year, Tilzer released another hit song, "When The Harvest Days Are Over Jessie Dear," lyrics written by Howard Graham. This was one of the last songs released by the Shapiro, Bernstein & Von Tilzer logo.

In 1902, Tilzer started his own music publishing business on 28th Street. The first four years of business were extremely profitable for Tilzer; he released seven hits on the label, which sold over 5 million copies of sheet music collectively. The songs were: "The Mansion of Aching Hearts;" "Down Where the Wurzburger Flows;" "On a Sunday Afternoon;" "Please Go 'Way and Let Me Sleep;" "Down Where the Cotton Blossoms Grow;" "Alexander Don't You Love Your Baby No More?;" and "What You Goin' to Do When the Rent Comes Round." These songs were made popular by many up-and-coming vaudeville and Tin Pan Alley stars. For example, Nora Bayes premiered the song "Down Where the Wurzburger Flows" at the Orpheum Theater in Brooklyn, and Weber & Fields produced the song, "On a Sunday Afternoon" for their popular variety show.

Tilzer's song writing bridged many styles and genres popular at the turn of the century in New York City. He contributed many works to the genres of "coon-songs," "mammy song," songs about Ireland, songs about the South, dance songs, and many more. In fact, Tilzer's song "The Cubanola" was an important catalyst for the rising popularity of the dance song genre in the 1910's. He subsequently wrote many popular songs in the genre, including "The Bunny Hug," "The Grizzly Bear," "The Turkey Trot," and "Just Around the Corner."

Tilzer's song writing activity began to wane in 1914. However, he continued to work as a producer and publisher well into the 1920's. Although Tilzer enjoyed composing in a variety of styles, his ballads continued to be the most widely acclaimed.  Among his late-period songs, the ballads "You'll Always Be The Same Sweet Girl," and "There's Someone More Lonesome Than You" were particularly well received by the public.

Harry Von Tilzer was truly an icon of the Tin Pan Alley music era. Throughout his career, Tilzer published nearly two-thousand songs, and contributed an enormous amount to the industry through his involvement in the production and publication of early popular American music. Von Tilzer spent the last years of his retired life at the Hotel Woodward in New York. He passed away on January 10, 1946. In 1970, Harry Von Tilzer was inducted into the Songwriter's Hall of Fame.

A Bird in a Gilded Cage

Harry Von Tilzer (originally Gumm or Gummblinksy), was born in Detroit in 1872. His passion for music became evident at an early age, and at fourteen he left home to join the Cole Brothers...

Sholom Secunda was born on August 23, 1894 in Alexandria, a small town in the Kherson province, to parents Abraham and Anna Secunda. He was the sixth of nine children born to the Secunda family...