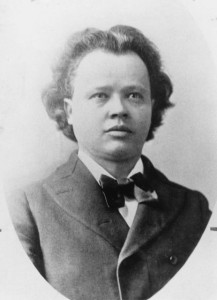 Edward Stark was born in 1856 in to father Josef Stark, a local cantor and butcher. As a young boy, Edward sang in his father’s choir along with his three older brothers.

In 1871, Edward and his family immigrated to to join the three eldest sons of the Stark family who had moved there in the early 1860’s. The Stark family settled in the German-Jewish community concentrated in the "East 50’s" of , and Josef was hired to officiate at Congregation Adat .

Edward worked for 20 years with his brothers in the clothing business, pursuing musical activities in his free time. In April of 1884, Stark married Rose Weinberger, and together they had four children. Stark was active in many associations, including the Germania Quartet Club, an amateur singing group. He composed several operettas for the group, such as “, oder Traumbild eines Gesang-Vereins” (“, or the Dream of a Singing Society”). Stark studied Hebrew and hazzanut with his father, and in November of 1885 traveled to and to  to study music formally.

In 1891, Stark accepted his first official cantorial position at Congregation Beth Elohim in , a post he held for two years. In October of 1893, he was offered a position at Emanu-El, the largest Reform Synagogue in . Emanu-El was one of the first synagogues to use the Union Prayer Book, and as such, Stark composed musical settings for most of the liturgy for their service. Many of these early arrangements were later included in his collection Sefer Anim Zmirot (1909-1913). Stark greatly increased the scope of Emanu-El's choir, and was one of the first cantors to introduce instruments, aside from the organ, into the synagogue service. Only two of his works for choir and instruments have survived: “Memorial Hymn” (1895) and “Day of God” (1898).

Stark was aligned with the South German cantorial style, a tradition he inherited from his father, and from teachers in . Stark advocated for the preservation of traditional nusach in the American Reform service. Most of his compositions included in Anim Zmirot utilize the adonai malakh and magen avot modes. Stark’s style was heavily influenced by the classical oratorio, and by the work of Salomon Sulzer and Louis Lewandowski. He continued to serve at Emanu-El until he fell ill in 1913, and was succeeded by Rueben Rinder. Stark spent his last years in , and died in April of 1918.

Edward Stark was born in 1856 in to father Josef Stark, a local cantor and butcher. As a young boy, Edward...

Samuel Naumbourg was born in Dennelohe, Bavaria, groomed from a young age to continue the long line of professional hazzanim in his family. He received his formal musical...

Born in Hohenemes, Austria, Sulzer officiated as a cantor in his hometown, and was later appointed cantor at the Seitenstettengasse Synagogue in Vienna, where he stayed for fifty-five years. He...