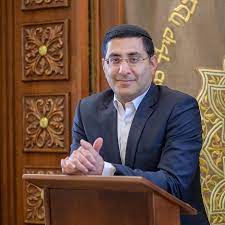 Rabbi David Menachem was born in 1980 to a family who immigrated from Iraq in the 1950s. His maternal grandfather, Rabbi Gurje Yair, was an educator and one of the greatest cantors of Iraq. As a child, he grew up in Jerusalem and absorbed the "Yerushalmi cantorial tradition" in the Ades Synagogue. As a child, he studied at a Talmud Torah  and later went on to study in the Merkaz Harav Yeshiva, where he was ordained a rabbi. Since his ordination, he has served as a community rabbi.

He plays the oud, the nay, as well as percussions. His cousin, the cantor Moshe Havusha, taught him the secrets of the Arab Maqam musical system and Arabic musical instruments. Since childhood, along with pursuing his Torah studies, he has performed with Iraqi musicians, members of the Voice of Israel in the Arabic Radio Orchestra. He also performed as a soloist with the Andalusian Orchestra of Ashdod, the Nazareth Orchestra, the New Jerusalem Orchestra, and more.

Rabbi Menachem sang and played with Dudu Tassa in the "Kuwaiti" album, with Aharon Razel, Nitzan Chen Razael, Yitzhak Meir, and more. He has also performed as a soloist at many festivals in Europe, the United States, Canada, and Morocco. As a musician and poet, he performs in Israel and abroad alongside many artists, such as Shlomi Shaban, Kobi Oz, Ariel Horowitz, Peretz Eliyahu, Mark Eliyahu, Yair Dalal, Jackie Levy, Rabbi Chaim Louk, and Shem Tov Levy.

He composed songs from contemporary poetry, from the songs of Yosef Ozer, Elhanan Nir, and Haviva Pedaya. Songs and piyyutim he wrote were arranged by Peretz Eliyahu and Shem Tov Levy.

Rabbi Menachem is presently active in promoting the world of Piyyut and Middle Eastern music in Israel. He takes part in the "Kehilot Sharot" Project and taught Judaism and piyyut to the best artists of Israel as part of "Yedidi Hashachachta", a project of "Beit Hillel."

Selected piyyutim performed by Rabbi David Menachem are available an his website.

Rabbi David Menachem was born in 1980 to a family who immigrated from Iraq in the 1950s. His maternal grandfather, Rabbi Gurje Yair, was an educator and one of the...

Simon Shaeen is a Palestinian- American oud and violin player and composer.