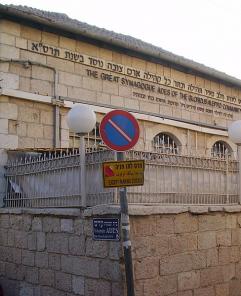 The Ades synagogue of the Aleppine Jewish community is located in the Nakhalat Zion neighborhood, in central Jerusalem.

At the turn of the twentieth century many Jews emigrated from Syria to various countries, particularly the U.S., England, different Latin American countries, and Palestine, where most of these immigrants settled in Jerusalem and in 1901 established the Ades synagogue. The construction was financed by the cousins Ovadiah Josiah Ades and Yosef Isaac Ades, from the Ades family of Aleppo, Syria, and the synagogue was named after the family.

Ades is adorned with special decorations, such a mural dating from 1911-1912 by the artist Yaakov Stark, one of the founders of the Bezalel Academy of Art and Design. It also has a large Torah ark, made in Damascus out of wood covered with geometric designs and inlaid with mother-of-pearl.

Since the aforementioned Jewish emigrations from Syria, Jerusalem and New York have become the centers of the Aleppine piyyut tradition. In Jerusalem, the Ades community maintains the musical tradition of the Aleppine Jews. Each Shabbat is matched with a specific maqam, according to the weekly Parashah. Since its inception, the synagogue has maintained the Bakkashot singing tradition, which is performed very early in the morning on winter Shabbats. A complementary tradition that was introduced to the synagogue by the main Gabai Yehezkel Nawama is Oneg Shabbat, the same practice of communal singing of piyyutim, but performed in the afternoon during summer Shabbats.

The piyyutim style of the Aleppine Jews as practiced in the Ades synagogue was a big influence on the development of the hazzanut style known today as Jerusalem-Sephardic. Many important hazzanim and rabbis have participated in services at the synagogue, including the late Sephardic chief rabbi and political power Obadiah Yosef of the Shas party.

Although the origins of the community are in Aleppo, by the 1960s fewer and fewer residents of the neighborhood were Aleppine, and the synagogue began to be frequented mainly by worshipers of Kurdish descent. Today local members of various communities frequent Ades, along with visitors such as musicians or tourists who come to enjoy the special singing traditions of Selihot and Bakkashot.

The Ades synagogue of the Aleppine Jewish community is located in the Nakhalat Zion neighborhood, in central Jerusalem.

A comparative survey of the music of the Jews in Syria and Turkey. Includes analysis of turkish and arab modal systems with examples from christian liturgy and arab songs.