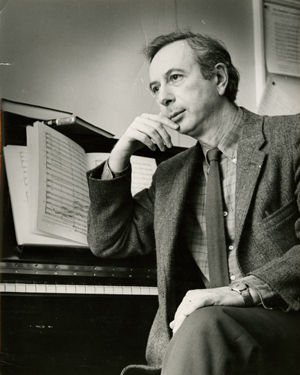 Alexander L. Ringer was an American research musicologist and educator of Dutch and Polish descent. He was a survivor of the Bergen-Belsen concentration camp. After the war, Ringer emigrated to New York City in 1947. There he received a M.A. in Sociology and psychology in 1948 from the New School for Social Research and a Ph.D. of Musicology in 1955 from the City College, Columbia University.

Following the completion of his degree, Ringer then taught at the University of California, Berkeley, and the University of Oklahoma, among other places, before coming to the University of Illinois in 1958, where he attained full professor status in 1963. Beginning in 1963, Ringer served as chair of the musicology division for six years. After this period he then directed the school's graduate and professional curricula. Ringer supervised the theses and dissertations of many graduate students, while also teaching many undergraduate courses in musicology. He retired from the university in 1991.

Ringer was also active in other universities, most notably the Hebrew University in Jerusalem, where he served as Fulbright Visiting Professor in 1962 to 1963 and in 1966 to 1967, in order to found and chair that school's musicology department. Ringer also served as visiting professor at the Eastman Schoolf of Music (1974), Tel Aviv University (1983), and Heidelberg University - Academy for Jewish Studies (1983). Ringer also gave guest lectures at universities, conferences and festivals throughout the world. He was highly active in the American Musicological Society, the College Music Society, the Organization of American Kodaly Educators, the International Kodaly Society, the Music Educators National Conference, the Music Library Association, the German Musicological Society, the World Congress on Jewish Music, the International Schoenberg Society, Society for Ethnomusicology and the International Folk Music Council. Ringer also served for many years as artistic adviser for the Jerusalem Music Centre.

Ringer was a member of the editorial board of Musica Judaica and general co-editor of the collected edition of Arnold Schoenberg's writings. He also served as editor of the International Folk Music Council's Yearbook (1968-1970), which he also founded, and edited a volume in the Music and Society series, "The Early Romantic Era - Between Revolutions: 1789 and 1848."

Finally, as a conductor, Ringer held choral positions in New York, Philadelphia, Berkeley, and Norman, Oklahoma. At UIUC he presented works by Mozart, Beethoven and Bruckner, in addition to coaching a number of recitalists.

The biography is from the University of Illinois site.

Alexander L. Ringer was an American research musicologist and educator of Dutch and Polish descent. He was a survivor of the Bergen-Belsen concentration camp. After...

Born in Berlin, Sachs studied piano, music theory and composition as a youth in that city. He began a career as an art historian, but promptly became more devoted to...

Albert Weisser was Born in New York City of Russian-Jewish parentage. He attended high school in Queens and sang in the choir of his uncle, the renowned cantor ...