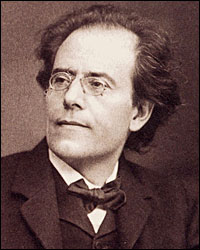 Gustav Mahler was born in Kalischt, Bohemia but spent most of his childhood in Iglau, Moravia (in present-day Czech Republic) surrounded by a flourishing German-speaking Jewish community. Mahler's formal musical education began in 1875 at the Conservatory of Music in where he studied piano with teacher Julius Epstein, and harmony and composition with Robert Fuchs and Franz Krenn. After completing his studies at the Vienna Conservatory and at , Mahler received his first conducting position at Bad Hall, a small theater south of in . A year later, Mahler began working as a conductor for the Landestheater in Laibach, a larger and more prestigious institution that staged both theater and Opera. Beginning in 1882, Mahler took several temporary conducting posts: in Iglau at the Stadttheater; at the Carltheater in  and finally at the Königliche Schauspiele in .

Mahler's conducting career quicky gained momentum, and in 1883 he was appointed the Royal Musical and Choral Director of , a position he held for two years. Mahler continued to travel and to advance his career as a conductor and composer, holding posts at theaters in , , and . Mahler's growing success and status lead to an invitation to work as the Director of the Vienna Court Opera, a post that cemented his reputation as one of the greatest conductors of his time. Mahler remained at the Vienna Opera for ten years, resigning in 1907 to accept a post as the Director of the Metropolitan Opera and of the New York Philharmonic.

Mahler’s musical beginnings in  set him in an artistic environment heavily influenced by the music of Brahms, Hanslik and Wagner. He was inspired by the innovation and the romantic spirit of Wagner’s Operas, and he tried to emulate that style in his own writing while using a modernist approach. Though Mahler made several attempts at composing Operas, none were ever completed or performed; his only published operatic composition is the completion of Weber's Die drei Pintos.

The majority of Mahler’s corpus consists of his ten symphonies and his great output of vocal music, including song-symphonies, cantatas, song-cycles, and Leid. The character of Mahler’s Symphonies and vocal works varies widely, exposing his constant growth and evolution as a composer. Mahler died on May 18, 1911 as the result of a severe blood infection caused by a chronic heart ailment. He left behind three major posthumous works, the song cycle Das Lied von der Erde and his Ninth and Tenth Symphonies.  The Tenth Symphony was long thought to be incomplete, with only two publishable movements, until Deryck Cooke discovered that the work was complete in short score, leading him to make a performing version.

Gustav Mahler was born in Kalischt, Bohemia but spent most of his childhood in Iglau, Moravia (in present-day Czech Republic) surrounded by a flourishing German-speaking Jewish community. Mahler...

David Nowakowsky was born in Malin, Russia near Kiev. Nowakowsky left home at an early age and moved to Berditchev where he was recruited as a choirboy for the local...