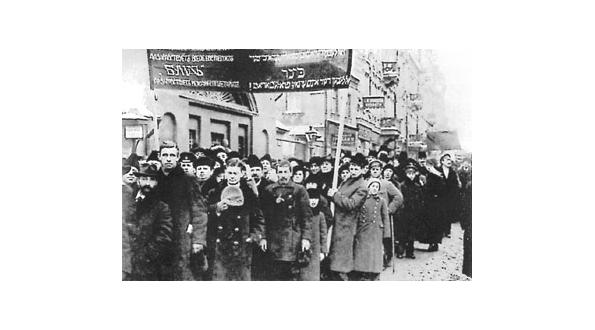 In honor of May Day, this month's song of the month is a Yiddish song about the political struggles of Jewish socialists, communists, and even anarchists, in Russia and Poland since the ending of the 19th century until the beginning of the 20th century. The song is actually a combination of two songs, arranged by Zalman Mlotek, musician, conductor, arranger and an authority in Yiddish folk and theater music.

Mlotek arranged the song for a documentary movie called Free Voice of Labor: The Jewish Anarchists (1980). He recorded the song again for the album, In Love and in Struggle, released by the YIVO Institute for Jewish Research in 1999, from which the recording attached below is taken. Mlotek learned these songs from his mother, Hannah Mlotek, a scholar of Yiddish song and archivist of the Yivo Institute. According to the booklet of this CD, these songs were sung at rallies of the Labor Bund, the Jewish communist party in Russia and Poland.

As mentioned above, the piece is comprised of two songs: אין אַלע גאַסן ("In Ale Gasn"-"Everywhere you look") and הײ הײ דאַלױ פּאָליצײ ("Hey Hey Daloy Politsey"-"Hey hey down with the police"). The first two verses come from In Ale Gasn, a labor song which talks about the exploitation of Jewish workers and calls the workers to take action and strike. It has a simple structure composed of a repeating verse with the same melody. The last two lines of each verse are sung twice. This song appears in two collections of Yiddish folksongs: Skuditsky (Kiev, 1933) and Beregovski (Kiev, 1934). Many variants exist which may differ either in the words or the music. One of the melodies in Beregovski's Old Yiddish Folksongs has a similar melody to the one featured here.

The rest of the verses come from a song called Hey Hey Daloy Politsey. This song appears in Skuditsky and Lehman (Warsaw, 1921). It was probably gathered by Lehman around 1905. The song consists of a verse—which was improvised by one of the demonstrators—and a recurring chorus, "Hey Hey Daloy Politsey…" which was sung by the crowd. It would be more accurate to say that the chorus was shouted rather than sung, but in this recording it is sung (including six verses). One may find many variants of this song as well, probably due to its improvised form. The text of the song tends toward anarchism, even anarchist terror, especially in the verse that calls to bury Tsar Nicolai along with his mother. These verses may be connected to more radical sections of the Labor Bund or to smaller groups of Jewish anarchists.

We owe thanks to Zalman and Channa Mlotek in their assistance with the gathering of materials.

To watch a video clip of the song with English subtitles taken from the movie Free Voice of Labor: The Jewish Anarchists, click here.

From the album In Love and in Struggle, featuring Zalmen Mlotek, Adrienne Cooper, Dan Rous with The New Yiddish Chorale & The Workmen,s Circle Chorus. Thanks to the YIVO Institute for Jewish Research for permission to use this recording. 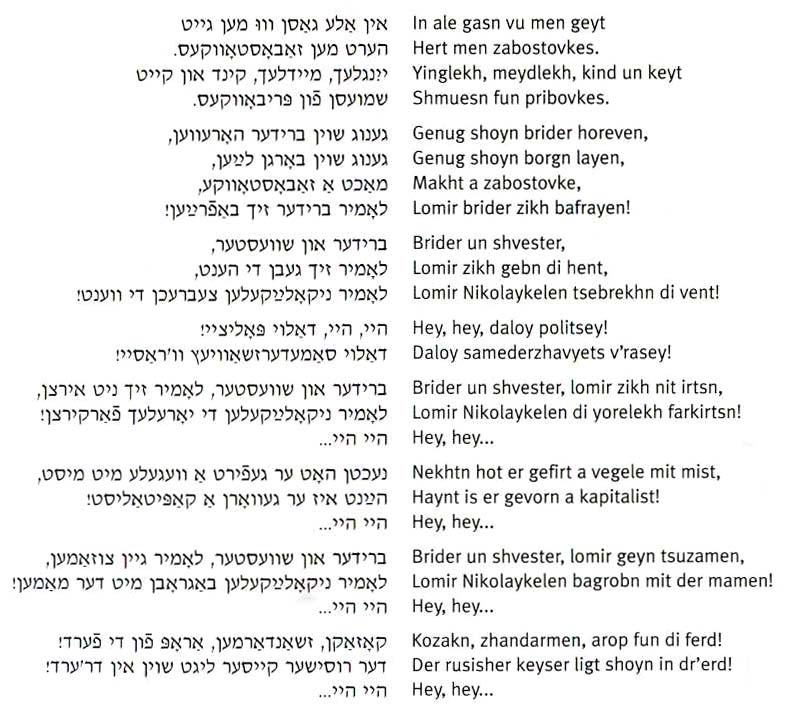 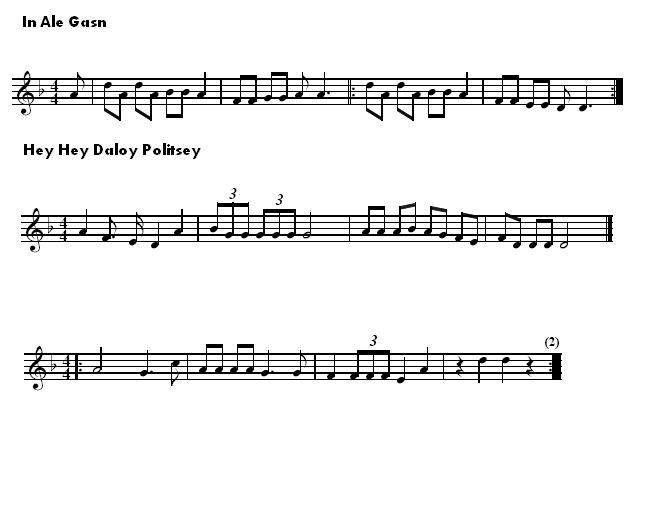