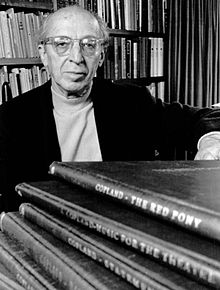 Aaron Copland was born in Brooklyn, New York, to parents of Lithuanian Jewish descent. In 1917 he began studying theory and composition with Rubin Goldmark, continuing his musical education with Goldmark, Victor Wittgenstein and Clarence Adler in lieu of pursuing a University degree. From 1921 to 1924 Copland studied with Nadia Boulanger at the Fontainebleau School of Music in Paris. During his time in Paris, Copland traveled extensively in England, Belgium, Italy, Austria and Germany, meeting composers and exposing himself to new music. Copland continued his studies with Boulanger long after he left the Fontainebleau school, and it was under her tutelage that he produced his first orchestral score, the ballet Grogh. His early works such as Dance Symphony (1929), Short Symphony (1933), Music for Theater (1925) and Piano Variations (1930) were strongly influenced by jazz music. Although the heavy jazz idiom of these pieces came under attack by critics, Copland secured a faculty position at the Berkshire Music Center in Tangelwood where he served as the head of the composition department for 25 years.

During his time in Tangelwood, he became active in New York’s League of Composers, often writing for its journal, Modern Music. He organized concert series and festivals, and was a supervisor at the Cos Cob Press, a publishing house for modern American Music. It was also during this period that Copland took a new direction in his compositional style. His second period, also known as his “vernacular period” was marked by a large production of work in 1936 including Billy the Kid, El Salón Mexico, Fanfare for the Common Man and A Lincoln Portrait. These pieces gained wide popularity, strengthening his identity as a composer of uniquely American music. Copland also experimented with film music composition, his biggest acheivement in this genre is the score for William Wyler’s The Heiress (1949), for which he won an Academy Award. Throughout the 1950’s and 1960’s Copland toured extensively throughout Europe and Latin America conducting concerts of his music and the music of other contemporary composers. In the mid-1970’s Copland began to experience memory loss, later being diagnosed with Alzheimer’s Disease, which brought an end to his prolific composing career.

Aaron Copland was born in Brooklyn, New York, to parents of Lithuanian Jewish descent. In 1917 he began studying theory and composition with Rubin Goldmark, continuing his...