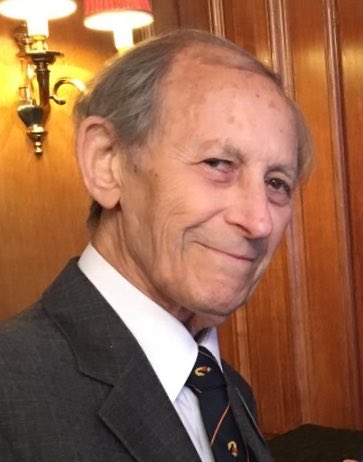 1933-2019
In Memoriam
The Jewish Music Music Research Centre bemoans the loss of Victor Tunkel, avid collector and scholar of Jewish music, who passed away on July 28, 2019, at the age of 85.
Mr. Tunkel was a barrister and senior lecturer at Queen Mary University of London. He was also a major figure in the field of Jewish liturgical music in his country in his role as a composer, researcher, educator and collector. He was the author of the 2006 book The Music of the Hebrew Bible, as well as numerous articles on Jewish music. Mr. Tunkel was a true friend of the Jewish Music Research Centre, sharing bibliographical information with us at his or our initiative.
His dedication to Jewish music went back to his childhood as a choirboy at the Hendon Synagogue, where the great Cantor David Koussevitsky officiated. Mr. Tunkel was a founder member of the famous Zemel Choir created in 1955, and he also greatly contributed to initiatives in Jewish music in England, especially to the Jewish Music Institute, which today is part of SOAS.
Mr. Tunkel was an avid collector of books, scores and manuscripts relating to Jewish liturgical music, eventually amassing one of the largest collections in Europe and likely among the largest of its kind held in private hands. Mainly focusing on liturgical music, the archive also contains extensive sections on Biblical cantillation, Jewish folk music of various kinds, Jewish musicological research, educational materials, etc. The archive also contains a section of rare manuscripts, including several from late 18th century Sienna, some of the oldest notated synagogue music.
In early 2019 Mr. Tunkel established a charitable trust to oversee his archive, with the intention to have the collection eventually deposited at Leo Baeck College in London, where it is to be catalogued and made available to interested scholars and researchers.