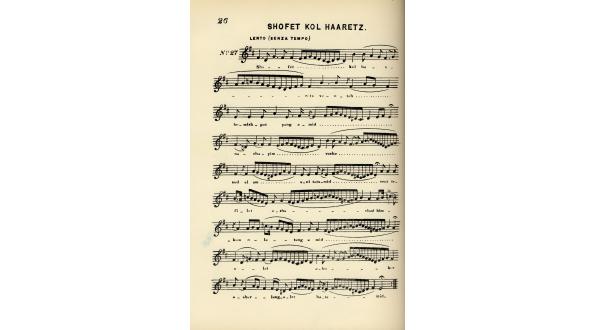 *In the photo above, Shofet kol ha'aretz, Spanish-Portuguese version. Source: Emanuel Aguilar and David Aharon de Sola, The Ancient Melodies of the Liturgy of the Spanish and Portuguese Jews. London, 1857.

Shofet kol ha’aretz is a piyyut for Rosh Hashanah of Sephardic origins that is also sung in various Ashkenazi communities during the High Holy Days. As the High Holy Days season arrives, we dedicate the song of the month to rare recordings of Ashkenazi melodies for this piyyut. The author’s first name – Solomon – surfaces in the acrostic, and its authorship was variously attributed to Solomon bar Abun, (12th century, French origin active in the Iberian Peninsula) or Salomon Ibn Gabirol. These attributions were rejected by recent scholarship.

This piyyut is in the form of a pizmon (stanzas of few rhyming lines with a refrain). In the Ashkenazi order of prayers it appears as an epilogue (or, in certain rites, a prologue) to the penitential hymns (selihot) sung during the High Holidays. In a thought-provoking article on Shofet kol ha’aretz in Ashkenaz, Hanoch Avenary (1908-1994) discusses twenty-four variants of the melody for this piyyut. Avenary classifies these variants into two main branches and traces their development against the background of the various Ashkenazi musical cultures.

The Ashkenazi tradition of this pizmon comprises what Avenary calls the “common” Ashkenazi melody (seventeen versions, the earliest already documented in 1724 and 1733) found in South and West Germany, West of Rhine river (See Image no.1( and in North Italy (see image no.2), and an “alternative” tune (seven variants) preferred by the communities of the “Polish rite” (East of the Elbe and Moldau river) (see image no.3). A melodic structure of four phrases, corresponding to the four lines of the poems’ stanzas is shared by all the variants. Each phrase is composed of two motifs which subdivide the long poetic verse of thirteen or more syllables.

Avenary is able to establish the characteristics that unite all the variants of the three sub-types of the “common” melody into one type. He also points out the features that separate these three sub-types. He shows the pentatonic foundations of the melody and its relationship to some features of the Ashkenazi Torah chant. Placing the three sub-types of the “common” Ashkenazi melody against their historical background, Avenary concludes that each of the three regions of Western Ashkenaz consolidated their own variants of the Shofet melody in a more or less individual manner. While variants of the Center and the West are rather close to each other, the Southern branch in Italy had disengaged itself even before 1724 from the transalpine tradition and had embraced the music aesthetics of the surrounding culture. The balanced course of Southern melody, with its melodious and embellished ductus, became completely dissociated from the old-fashioned pentatonics with their reminiscences of Biblical chant.

The “alternative” Eastern European melody of Shofet kol ha’arez bears the unmistakable stamp of the Ashkenazi style (hazzanut). It is not only the expressivity and the strong accent placed on words of emotional and imaginative capacity that are characteristic of this style. The melody itself is not based on a universal musical language like pentatonics, but uses a strongly profiled Jewish prayer mode whose foremost characteristic is a stock of idiomatic motifs whose appearance indicates to the initiated listener the liturgical context of its performance.

In spite of their different modality the two melodies, the “common” or Western and the “alternative” or Eastern, one have some common features: interesting motivic relationships can be observed of which the most obvious one is the final cadence which is shared by most of the “alternative” variants and by all of the “common” versions, except the Southern (Italian) one. This cadence is a quotation of the motifs used for the closing masoretic accents of the Pentateuch verses as chanted on the High Holidays. The use of a prominent motif of Biblical chant as the final cadence of most Shofet versions can be interpreted in two ways. First, the last verse of each stanza is always a quotation from the bible, and there are precedents for the connection of Bible texts with Biblical chant. Furthermore, this topical motif of the High Holidays forms a musical link between the festival season and the Shofet hymn. This kind of relation between a song and its liturgical context is frequent and is almost a precondition for the acceptance of a melody into the traditional Ashkenazi repertoire.