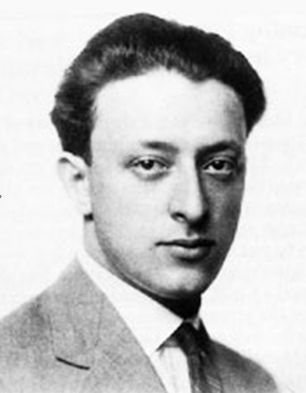 Rafael Schächter was born May 27, 1905, in Braila (Rumania). After World War I, Schächter moved to Brno, where he began his formal musical studies. He continued his studies at the Prague Conservatory of Music, where he received degrees in composition and conducting, and at the Master School, in piano. After graduating, Schächter formed a successful Chamber Music Opera, and was a sought after vocal coach.

Schächter arrived in Terezín on one of the first transports in 1941. Due to the lack of resources (i.e. instruments and scores), early musical activity took the form of communal singing in the barracks. By 1942, Schächter's organized choral activities began to take shape. In collaboration with Karel Švenk, an actor, director, writer, and composer active in Prague before the war, Schächter produced the first all-male cast cabaret variety show. The final song, “Terezín March,” became an instant hit, and was a mainstay in all subsequent cabarets staged by Schächter and Švenk.

With the influx of musical prisoners to Terezín, Schächter's choral activities grew in scope and in quality. The arrival of pianist Gideon Klein was particularly opportune; he arranged Czech, Slovak, Hebrew and even Russian folk songs for Schächter's expanding choral group (an invaluable resource due to the lack of scores). Due to the growing success of his all-male ensemble, Schächter formed a women's chorus, which he eventually incorporated into one larger mixed ensemble. Schächter's efforts inspired other musicians to organize singing groups: Karel Berman formed a girls chorus; Karel Vrba formed a boys chorus; and Siegmund Subak formed a chorus specializing in Jewish liturgical music, Yiddish folk songs, and new Palestinian music.

In addition to organizing choral activities, Schächter produced several Operas for performance in Terezín, including Smetana's The Bartered Bride and The Kiss, and Mozart's The Marriage of Figaro and The Magic Flute. Schächter was a popular piano accompanist in Terezín; he performed in many recitals of lied, songs, and operatic excerpts. He also offered private lessons to talented children that wanted to participate in adult musical activities.

During the years 1943-44 Schächter was involved in staging several oratorios and cantatas. He organized and conducted Verdi's Requiem and the cantata, The Czech Song by Bedřich Smetana. In the summer of 1944, Schächter presented a vocal concert dedicated entirely to Smetana's compositions in honor of his sixty year remembrance. Schächter delivered several successful performances of Verdi's Requiem, despite heavy deportations that greatly depleted members of his chorus. In 1944, he was ordered to give a gala performance of the Requiem to the Committee of the International Red Cross, hosted by Adolf Eichmann. Schächter was deported to Auschwitz in one of the final liquidations of Terezín in October of 1944, and was immediately executed upon arrival.

Rafael Schächter was born May 27, 1905, in Braila (Rumania). After World War I, Schächter moved to Brno, where he began his formal musical studies. He continued his studies at...