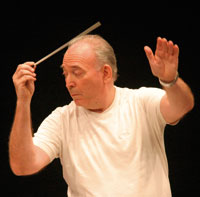 Israeli composer, conductor and lecturer
1935-2018
Author
Ronit Seter
Noam Sheriff (b. Tel-Aviv, 1935-2018), composer, conductor and lecturer. Sheriff is the only celebrated Israeli composer of his generation that also developed a career as a conductor, and as musical director of the Kibbutz Chamber Orchestra (1973-1982) and of the Israel Symphony Orchestra of Rishon-LeZion (1989-1995). He taught orchestration at the Cologne Musikhochschule (1983-6), gave a conducting course at the Mozarteum in Salzburg, and chaired the The Rubin Israel Academy of Music at Tel-Aviv University (1998-2000), where he taught for a couple of decades, beginning as a professor in 1990.
Since his debut as a 22-year-old composer, with his 1957 Festival Prelude performed that same year by the Israel Philharmonic Orchestra under Leonard Bernstein, he has written over 25 major orchestral and vocal works, and a similar number of chamber and solo works. His works, influenced by his teacher Ben-Haim, range between light classical, based on folk tunes (early in his career) through-composed pieces with clusters, microtones and aleatoric effects (a few pieces in the late 1960s), to his personal, local interpretation of neo post-romanticism.
His major works include orchestral compositions, such as: Israel Suite (1967), May Ko Mashma Lan… (1976), La Follia Variations (1984), Akeda (The Sacrifice of Isaac, 1997); Concertos: Song of Songs (flute, 1981), Violin (1986), “Scarlattina” (piano, 1994), Cello (1996); and vocal with orchestra, such as his trilogy: Mechaye Hametim (1985), Sephardic Passion (1992), and Psalms of Jerusalem (1995). Sheriff is known and often performed in . He is published by the Israel Music Institute and by the German publisher, Peters.
"Festival Prelude" (Akdamot Lemoed) by Noam Sheriff

Noam Sheriff
Noam Sheriff (b. Tel-Aviv, 1935-2018), composer, conductor and lecturer. Sheriff is the only celebrated Israeli composer of his generation that also developed a career as a...
Marc Lavry