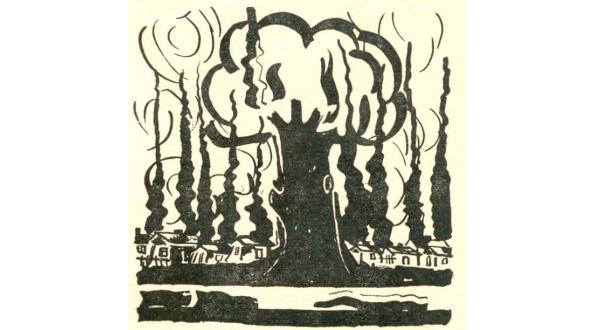 Our previous 'Song of the Month,' Unter di grininke beymelekh, developed into many versions in which the lyrics were modified. One example is a song commemorating victims of a pogrom, which opens: "Beneath the green trees, Moyshelekh and Shloymelekh are homeless."* The present ”Song of the Month,” Unter di Poylishe grininke Beymelekh, however, is not simply a textual modification of Unter di grininke beymelekh. It presents a new melody and a very different text, thus creating an entirely new song. It is, in fact, a sort of response—or perhaps a sequel—to Bialik's and Brounoff's song, in light of the Holocaust. It could well be titled, Unter di grininke Beymelekh 2 (the Holocaust). The most obvious connection between the two songs is their almost identical opening line. However, a more careful analysis reveals more hidden connections in other lines.

The poem, Unter di Poylishe grininke beymelekh (Beneath the Polish Green Trees), was written by Joseph Papernikoff. Papernikoff published his song in Tel Aviv in 1945, as part of a collection titled, "Mayn brenendiker shtam" (My Torrid Race), containing poems about the Holocaust, during which most were likely written. The melody was composed by Israel Alter (1901-1979), a Polish-born cantor-composer and faculty member at the Hebrew Union College. It was published in New York (by Hensley Music Co.: Metro Music Co.) in 1966.

Papernikoff's text portrays the tender Jewish children of Bialik during the Holocaust. They do not play anymore beneath the green trees, but hide in their houses, and instead of their previous curiosity, their big, wandering, Jewish eyes are now black and full of fear. One interesting addition by Papernikoff is the inclusion in the poem of Sarahs and Leahs, not only Moyshes and Shlomos, as part of a more modern view.

Israel Alter's melody is perhaps influenced by his experience as cantor. It is monotonic and sad, and sounds like a Jewish prayer. This is a main difference from Brounoff's lyrical melody in Unter di Grininke Beymelekh. Furthermore, Alter's music is longer and more complicated than Brounoff's. But still Alter preserves few of Brounoff's original elements. He tries to maintain some of the structure of a children’s song. The text consists of 5 stanzas, the last being a repetition of the first. Each line has 12 syllables, and each syllable is given an eighth note, thus making each line exactly 4 bars long. This creates a very clear structure of 80 bars. The clear structure, monotonic rhythm, and generally narrow range of the melody help to preserve the essence of a children’s song. The through-composed form, however, tampers with this essence, making the song difficult to remember and disposing with the catchiness of Brounoff's music. Another difference is the longer melody given to each line: 4 bars in Alter's music instead of 2 in Brounoff's (due to Papernikoff's 12-syllable lines).

The most important difference in the music of the two songs is the elaborated harmony. The complicated harmony in the later song shadows the remains of the spirit of a children’s song in structure, but some connections to Brounoff can be perceived.

The changes in the harmony in Unter Di Poylishe Grininke Beymelekh correspond to the division of the song into five stanzas; each stanza is set to a unique harmonic progression.

The first stanza remains in the simple harmony of D minor, with a brief modulation to the parallel major scale. It might be suggested that this modulation is a reference to the same modulation in Brounoff's music. The stanza ends with an open cadence on the dominant, leading to the next stanza.

The second stanza is a continuation of the first, and remains in D minor. The D minor harmony is modal, sustaining several plagal cadences one after the other. It ends on the fourth degree and rests there, before entering the next stanza with new harmonic material.

The third stanza introduces a sudden change of harmony: a modulation of the tonic chord from minor to major. The scale used in this stanza is the Hassidic mode (Shteiger) "Ahava Raba." The use of the Hassidic mode offers a chilling reference to the old Jewish communities of Eastern Europe that vanished in the Holocaust. It can also be regarded as a reference to Brounoff's second melody of Unter di Grininke Beymelekh, which he wrote and published prior to the famous one.

The fourth stanza describes the eyes of the children, the eyes that were wide and curious in Bialik's song, but now are black and full of fear. This startling allusion to Bialik's song is set to the most intense segment of the music. The melody rises as high as E flat, and the harmony is extended in consecutive secondary dominants until landing on a G minor chord. From the G minor chord, the harmony returns to the Hassidic mode on D, preparing for the concluding stanza.

The last stanza is a textual repetition of the first. It continues with the Hassidic mode, and returns to D minor, the original tonality, in the middle. There is a sustaining second degree on the down-beat of the final D minor chord, thus maintaining the tension gathered throughout the entire song until the final release.

As we have seen, Unter di Poylishe grininke beymelekh mirrors Unter di Grininke Beymelekh on many levels. It portrays the horrors of the Holocaust with a seemingly simple image of Jewish children that used to play beneath the trees, but now are afraid to do so. Both the words and the music create many layers of this image.

The recording is by cantor Louis Danto, from the album Song of Holocaust and Heroism (Canada, 1996). It is presented here courtesy of Rouhama Danto, Cadenza Records.(Notice that the clarinet opens with Brounoff's melody of Unter di Grininke Beymelkh, from the last song of the month.)

Lyrics and Hebrew and English translations