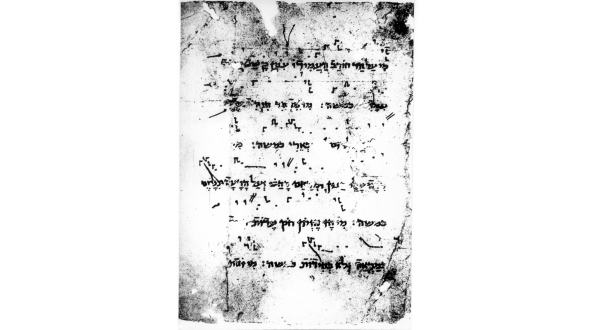 Mi-al har horev from the manuscripts of Obadiah the Proselyte

The preparation of this song of the month was inspired by several recent inquiries regarding the musical manuscripts of Obadiah the Proselyte. The staff of the Jewish Music Research Centre hopes that the information provided in the introduction, the accompanying recordings, and the bibliography will provide a general picture regarding this interesting set of early Hebrew musical manuscripts.

In 1918, a fragment containing medieval musical notation was discovered in the Cairo Genizah. The manuscript containing the piyyut Mi-al har horev, was subsequently studied in depth by a group of researchers including E.N Adler, several Benedictine friars of the Solesmes School, and A.M. Friedlander. They coined the text "The Eulogy of Moses," which they believed was written either for the festival of Shavuot (Penticost) or for Simchat Torah (Rejoicing of the Law). The text itself consists of six rhymed couplets set to a similar melody, ending with the refrain ki-moshe (like Moses). Based on the text's double acrostic form, the research group suggested that the author of the fragment was an 11th-century poet by the name of 'Amr ibn Sahl. They identified the musical notation as originating from the 12th-13th century southern Italian School of "Lombardic notation," later known as "Beneventane notation." The neumes are written in diastematic notation (i.e. without a musical staff), which made transcription of the melody particularly challenging. Part of the fragment (line 6 of the recto to line 10 of the verso) contains a Hebrew letter clef, marked by the letter dalet, the fourth letter in the Hebrew alphabet. This clef can be interpreted in a number of different ways; the dalet could correspond to the note D (re), the note F (fa) which is the fourth note in the C major scale, or finally as C (do, indicating a basic C-clef). To view images of the original manuscripts click here.

The Hebrew script that appears in the fragment was classified by Nechamia Allony as an oriental square script, which shares certain basic characteristics with Rashi script (11th-12th c.). The unlikely combination of oriental Hebrew text and Italian Christian musical notation found in these fragments puzzled many scholars. In 1965, Allony discovered two additional manuscripts from the Genizah collection housed at the Cambridge University Library: a second version of Mi-al har horev, and a fragment with additional Hebrew texts containing neumatic notation. The additional hymn texts Wa-Eda’ mah and Baruk’ Hag-Gever were labeled according to the first words of the poem. That same year, Alexander Scheiber and Norman Golb published studies independent of one another, pointing to the undeniable similarity between the script of the new musical manuscripts to that of the Mahzor Genizah fragment signed by Obadiah the Norman Proselyte. Basic information about Obadiah's life and education has been gleaned from his memoirs, generally known as the "Scroll of Obadiah," which was pieced together between 1919-1953 from fragments held in the Cambridge University collection and the Adler Collection at the Jewish Theological Seminary. Obadiah the Proselyte was born in Italy c. 1070 A.D., and converted to Judaism according to his record in 1102. After his conversion, he traveled to Syria, Palestine, and Baghdad, where he learned to read and write Hebrew script. He finally settled in Egypt, as a member of the thriving Jewish community situated there, and wrote his memoirs. The discovery of Obadiah the Proselyte's authorship essentially solved the mystery of the rare combination of oriental Hebrew text and Italian musical notation. Researchers were also better able to date the manuscripts, which they now believe originated sometime between 1102 and 1150 A.D.

The manuscript of Mi al-har horev consists of six strophes of the "Eulogy of Moses" (lines 1-8 and most of 9) a non –strophic epilogue inspired by Isaiah 60:1 (lines 9-11), and a quotation of the verse from Isaiah in full (lines 12-13). The "Eulogy of Moses" and the epilogue are neumated, and the verse from Isaiah is text-only. Adler's transcription includes a transliteration of the Hebrew text along with an approximate notation of the original neumes. The "white neumes" indicate gaps in the manuscript that were filled, or instances where the notation is uncertain. To view Israel Adler's transcriptions of the manuscripts, on which the two recordings below are based, click here

If you are interested in learning more, please peruse our bibliographical database, which includes a number of important articles relating to the discovery and analysis of Obadiah's manuscripts, as well as additional recordings. For a new repository of primary materials on Obadiah the Proselyte see the special website launched in 2019.

Recording of "Mi'al har horev" from Obadiah the Proselyte's Hebrew musical manuscripts, arranged by Andre Hajdu and performed by the Jerusalem Children's Choir under conductor Yonatan Lesser. This recording is provided courtesy of Hazmana L'Piyut: www.piyut.org.il