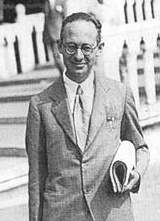 Mario Castelnuovo-Tedesco received his formal musical education at the Istituto Musicale Cherubini in , with a focus of piano performance. He received a degree in composition from the Liceo Musicale of in 1918, studying under renowned composer Ildebrando Pizzetti. His relationship with Pizzetti proved invaluable in the advancement of his early career; Pizzetti helped to bring Casetlnuovo’s work to the attention of Alfredo Casella, who became one of his most enthusiastic supporters and patrons. When Casella and his colleagues founded the Società Italiana di Musica, they continued their support of the young musician through regular performances of his works.

In 1931 Jascha Heifitz commissioned Castelnuovo-Tedesco to write a violin concerto. In response to rising anti-Semitism in , he made the decision to incorporate Jewish themes into his piece as a protest against discrimination. Speaking about the composition of the Heifitz concerto, Castelnuovo-Tedesco later commented, “I felt proud of belonging to a race so unjustly persecuted; I wanted to express this pride in some large work, glorifying the splendor of the past days and the burning inspiration which inflamed the envoys of God, and the prophets.” In an effort on the part of the Italian government to advance racial and national propaganda through the arts, Castelnuovo-Tedesco’s music was banned from the radio and all of his concerts were canceled.

He left for the in 1939, shortly after the outbreak of World War II. In , Castelnuovo-Tedesco and his family settled in , where he landed a contract with MGM as a film composer. He worked for 15 years with several studios, composing music for over 200 films. During his time working in , he also continued composing art music, producing a corpus of 70 orchestral works and several Operas, including The Merchant of Venice (1961). In the last years of his life, Castelnuovo-Tedesco worked as a teacher of film music at the Los Angeles Conservatory of Music, where he taught noted composers Goldsmith, Mancini, Previn, Riddle and John Williams.

Premiere performance of "The Merchant of Venice," by Mario Castelnuovo-Tedesco, Op. 76 (1961).