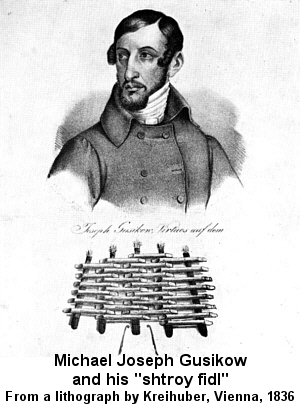 Musician. Born in to a famy of 'Klezmerim.' Became famous in Europe as a virtuoso musician, whe touring and playing on a self-made instrument, similar to a xylophone, which he called "Holz und Stroh" (wood and straw). On it he played well known pieces of the time, performing in front of notable figures such as King Leopold of Belgium. Guzikow was highly praised by musicians such as as Felix Mendelssohn, and met with him privately in Leipzig. He is considered by some to be the most famous Klezmer player of all time, and he is one of the first known Klezmer musicians to appear before a Western audience.

For an expanded biography and information about the Joseph Michael Guzikow archive, click here.

(Above link: Rainlore's World of Music website. An illustration of his instrument, together with Guzikow's portrait, appears on the right.)

Additional bibliographical sources can be viewed at the site of scholar Janet Wasserman. An Independent Scholar Unbound.

(Pictures are taken from rainloresworldofmusic.net)