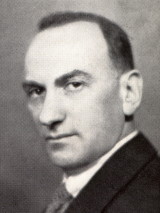 Joseph Achron was born in Lozdzieje, a small village in . His musical genius became evident early on and at the age of five he began violin lessons with his father. Achron continued his formal musical education at St. Petersburg Conservatory where he studied under renowned violinist Leopold Auer, and composer Anatoly Lyadov. In 1908 together with Solomon Rosowsky, Mikhail Gnessin, Alexander Krein, and Moses Michail Milner, he founded the Society for Jewish Folk Music. Achron's association with these musicians and composers inspired a change in his compositional style. This shift was best marked by one of his earliest and most famous works, A Hebrew Melody (1911).

In 1913 he moved to to take a position as the head of the violin and chamber music departments at the Kharkov Conservatory. Achron's tenure there was cut short by his draft into the Russian Army in 1916. In the years after World War I, Achron toured extensively as a concert violinist throughout and the , finally settling in in 1925. There, he continued teaching and performing, and began to write music for the Yiddish Theater. In 1932 he was commissioned to compose Evening Service for the Shabbat by Temple Emanu-El in , which gained him recognition as a serious composer in the . In 1934, Achron moved to to compose music for film, but felt limited by the enterprise, and continued his efforts in art music composition and performance. He composed more than 80 works in his lifetime, the most noted of which are his violin sonatas and concertos, the Golem Suite (1932) and his incidental music to plays by Shalom Aleichem, Sholem Asch, and Abraham Goldfaden.

The following article on Joseph Achron by Dr. Leonid Butir is made possible through a grant from the for the Research of Russian and European Jewry.

Joseph (Yussl) Achron, Jewish violinist and composer, was born May 1/13, Lodzdzieje, Suvalki, then province of the Russian Empire, now . He was initially taught violin by his father Yuli (Yudel) who also built Joseph’s first violin. Yuli Achron was a local merchant and a maskil, an expert on classical Hebrew and a baal-kore in the synagogue who also taught himself mathematics, medicine, architecture, and music. In 1891, the Achron family moved to where Joseph continued his violin studies with B. Michalovich and for the first time at the age of eight, performed at a public concert. A year earlier, he had already finished his first composition. In 1896/97, Achron, now a student of Professor Isidor Lotto, gave with great success concerts in various cities of the European part of the Russian Empire. On the occasion of the Royal Prince Georgii Aleksandrovich’s birthday, he performed at the in Gatchina in the presence of Emperor Nicolay II and the widowed Empress Maria Fedorovna. Between 1899 and 1904, Achron studied violin with Leopold S. Auer and harmony with Anatol Konstantinovitch Liadov at the St. Petersburg Conservatory. Upon his graduation, Achron received the conservatory’s gold medal and was granted the Mikhail Palace Prize. The following three years, he spent mostly in and gave concerts in different German cities. His playing was praised by Joseph Joachim, one of the outstanding European violinists of that time: “In elegance of playing, Achron matches Jan Kubelik, but he exceeds him in beauty of tone.”

After returning to , Achron continued to perform and at the same time, immersed himself in the study of counterpoint, fugal and other musical forms and studied orchestration with M. Steinberg. During that period, he composed mostly works for violin and chamber music. In 1911, Achron joined the “Society of Jewish Folk Music” founded three years earlier by Joel Engel, Solomon Rosowsky, Michail Gnesin a.o. For some time, he acted as the head of the society’s musical committee, which constituted a kind of creative laboratory for Jewish art music. Between 1913 and 1916, Achron was the Head of the Violin and Chamber Music Department at the conservatory in , now . Among his students was Isaac Dunaevskii, the future cutting-edge of Soviet entertainment music. During the two last years of World War I, Achron served in the music division of the Russian army giving concerts for soldiers at the Western war front. After the war, he became Head of the Violin Department in and worked extensively on a comprehensive treatise on violin playing. A small part of it was published in 1926 entitled On the Execution of Chromatic Scales on the Violin. At the same time, Achron composed also incidental music for the Petrograd Jewish State Theatre. Towards the end of 1922, Achron moved to , where he became a member of the editorial staff of the Jewish music publishing house “Jibneh,” taught violin and toured throughout and abroad (, , and ). In 1924, he spent two and a half months in where he was probably the first European virtuoso to perform in the Jewish agricultural settlements and cities. Vivid impressions from this visit have deeply affected his compositions written between 1925 and 1933, e.g., his First Violin Concerto, op. 60, the Dance of Salome, op. 62, and the song Po En-Harod.

From 1925 on, Achron lived in the , first in , where he joined other eminent representatives of the Auer class who appreciated Achron’s compositions and performed them regularly. Achron became friendly with Jasha Heifetz and dedicated to him his First Violin Concerto (written later the Third Violin Concerto was commissioned by the great violinist). In , Achron still continued to perform, but emphasized on teaching and composition. He taught at the Westchester Conservatory of Music in as well as many private students. His English translation of Rimsky-Korsakov’s “Practical Manual of Harmony” (1930) strengthened his reputation as a teacher of music theory. Andre Previn, renown composer, conductor and pianist, was among his students. The first decade in was the most fruitful for the composer Joseph Achron, when he worked successfully with orchestras and chamber music ensembles and wrote music for Maurice Schwarz’s and for synagogue services. In , Achron joined the “Mailamm,” the American-Palestine Music Association, a Jewish voluntary organization that supported projects concerning Jewish music education and research of Jewish music in . The heavy economic conditions caused by the Great Depression forced him to move to the West coast in 1934 and to settle in , where he worked successfully with orchestras for various film studios. In , he also met again some of the German-Jewish musicians that he knew from his previous sojourn in and who had fled Nazi Germany. Most importantly, Achron became friendly with Arnold Schoenberg, who much appreciated his compositions and described him in his obituary as: “one of the most under-estimated modern composers; the originality and profound elaboration of Joseph Achron’s ideas guarantee that his work will last”. Due to his time consuming work with the various Hollywood studio orchestras and in addition restricted by a serious illness, Achron managed to finish only a few new compositions during his years in . He reworked some earlier compositions and re-orchestrated others for string orchestra that were broadcasted under his baton. Joseph Achron died April, 29, 1943, and was buried in the , .

Achron, the violinist-virtuoso, started his composition career by writing brilliant pièces de salon for violin, but eventually composed in various styles, genres and different instrumentations. His oeuvre includes incidental music for the theatre (Belschazzar, Golem), 3 Concertos for Violin and Orchestra (not considering two more, written before graduating from the conservatory), 2 Sonatas and 4 Suites and a number of miniatures for Violin and Piano, 3 Quartets (the second entitled 4 Improvisations, op. 63, the third – Sinfonietta, op. 71), some large piano compositions (Variations on a Palestinian theme, op. 39; Concerto for Piano solo, op. 74), piano compositions for children, more than twenty songs, choral works, etc. Moreover, Achron wrote music for the first film-ballet A Spring Night (1934). He also made many transcriptions of classic and pre-classic music for violin; most significantly 11 Caprices by Paganini with Piano accompaniment (1919-22) displaying modern harmonic influences. Achron’s entire oeuvre combines 19th century romantic lyricism and sincerity with a grotesqueness inspired by Prokofiev and Stravinsky. Nevertheless, he managed to develop a very individual style driven by his persistent aspiration to create his own musical language.

During his childhood, Achron absorbed the traditions of 19th century virtuoso violin music, whereas later on, he was influenced by the . Yet in 1904, the influence of Alexander Scriabin, very much the opposite to the Petersburg School and the “idol” of Russian (and Russian-Jewish) musical youth in the first decades of the 20th century, became rather detectable in his music, starting with his Prelude for Violin and Piano, op. 13. By the way, Achron was the only contemporary composer who composed a memorial work on the occasion of Scriabin’s death: his monumental Epitaph for chorus and orchestra, op. 38. During his stay in Berlin, Achron became acquainted with the musical expressions of the Jugendstil, that eventually left their imprint on rather nonspecific genres such as violin sonatas and suites, as well as on vocal works in the tradition of late romantic Lieder. Joining the “Society of Jewish Folk Music,” meant a turning point in the evolution of Achron’s style: he now strove to create an art musical language based on traditional Jewish music. His first attempts were entirely affected by the same paradigm of national musical style, which half a century ago had determined the creative activity of the (the Mighty Five). Achron’s famous Hebrew Melody, op. “free arrangement of folk tunes,” that he remembered from his childhood, is an example for this approach. However in the 1920s and 30s, Achron started to extract short phrases from traditional Biblical cantillation (in the Lithuanian pronunciation accustomed to him) that he believed to be the most authentic element of Jewish musical consciousness. Combining these phrases with rigid harmonies and complicated counterpoint techniques of contemporary avant-garde music created a “pure Jewish style,” as Achron named it, that was rarely identified as Jewish music by the audience, e.g., the Children’s Suite, op. 57, or the First Violin Concerto. Aspiring to a greater awareness of a new Jewish music, he recommended to modern composers the use of more recognized elements of ethnic musical tradition - first of all, dance rhythms. The idea of a “pure Jewish style” was further developed in the works of the two younger Jewish composers Abraham Wolf Binder and Gershon Ephros, whom Achron considered his students. The significant part of Achron’s oeuvre has so far remained unpublished. The majority of his autographs is stored in the Achron archive at the Jewish National and University Library in Jerusalem.