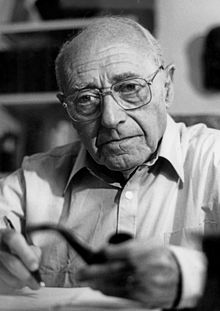 Josef Tal (b. Pine, Germany 1910 - Jerusalem 2008, immigrated in 1934), composer, pianist, conductor, and lecturer, has gained an exceptional reception in the last decades. As one of the most published local composers, about 100 of his pieces have been published by the Israel Music Institute. He was the most distinctive among the first generation of composers who principally opposed the use of folklorism and orientalism. This may have reflected his education in Berlin in the late 1920's, where he was immensely influenced by the Second Viennese school.

As expressed in his colorful, thought-provoking autobiography and elsewhere, his ideas are similar to those of Schoenberg’s in Style and Idea: against nationalism in music that is based on folklore, and (implicitly) supporting German hegemony in music. Tal’s works, mostly atonal and serial, expressionist and meticulously structured, post-Bergian with soft Darmstadt influences, have indeed gained a considerable reception in Germany, no less than in his own country. Tal was a 1971 Israel Prize laureate and a 1983 recipient of the prestigious Wolf Prize—the only Israeli composer who has won this prize. He also served as chair of the two major music institutions in Jerusalem: the Rubin Music Academy (1948-1952); and the musicology department of the Hebrew University (1965-1970), where he taught between 1951 and 1981. Although he did use some local and Mizrahi melodies in his works at a time when that Zeitgeist was at its peak in the early 1950's, Tal became known as the pioneer of electronic music in Israel (and among the first in the world), establishing the first Israeli electronic music center at the Hebrew University in 1961. This marked the continuation of his initial interest in electronic music, which was initially conceived in Friedrich Trautwein’s electronic music lab in the Berlin Musikhochschule of the late 1920's (where Tal also studied with Hindemith).

Almost half of Tal’s over 100 works are orchestral and stage works (operas, oratorios). Only a dozen of his works that he included in his biography are electronic. Among them are some of his concertos for a solo instrument and electronic tape (nos. 5 and 6 for piano, one for harpsichord and one for harp), and other pieces written mostly in the 1960's and 1970's. He has written over 20 chamber pieces, including three string quartets (1959, 1964, 1976), and over 12 pieces for his instrument, the piano (in addition to the concertos). These include his often-performed 1950 Sonata, and the 1962 Dodecaphonic Episodes, five methodical piano pieces including a chart of the rows and composer’s analysis. His orchestral works include 6 symphonies, another 6 orchestral works, and 13 concertos. He was awarded the first of three Engel Prizes throughout his life for the first symphony (1953). Tal’s widely performed works are his second symphony (1960), his piano concertos (which he himself has often performed), and his stage works.

Tal composed extensively for the stage - 18 operas, oratorios, cantatas and dramas – mostly based on Biblical or modern Hebrew texts. He collaborated with librettist Israel Eliraz for five of his eight operas, written between 1957 and 1995: Ashmedai, Massada 967, The Garden, The Hand, and Josef. His 1995 Josef depicts three figures: the biblical Josef, Kafka’s character, and obviously the composer himself, hence a key work of the 85-year-old composer. A major event with considerable reception, the opera was premiered as a final celebration of the first year of the New Israel Opera in its new Tel-Aviv house, June 1995.

Josef Tal (b. Pine, Germany 1910 - Jerusalem 2008, immigrated in 1934), composer, pianist, conductor, and lecturer, has gained an exceptional reception in the last decades. As one of the most...