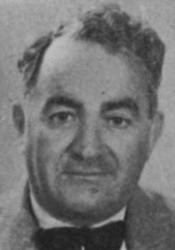 He studied at the "cheder" (religious elementary school). Later he graduated from high school in Zlatopol as an external student. In 1917 he joined the historical philology department at Kiev University, devoting himself primarily to the history of art. In 1920 he joined the Faculty of History and Philology of Odessa University. He married Yehudith Wahl, from Berlin.

In 1917 he began writing about music for various Russian-language periodicals in Kiev and later switched to Yiddish. For a short period, he wrote articles for the Kiev Yiddish daily newspaper Di naye tsayt (The new times) in Russian, and someone on the editorial board would translate them. He spoke Yiddish at the time but was unable to write, though later he became very familiar with Yiddish as well. In 1920 he left Bolshevik Russia and intended to make his way to the land of Israel, but he was delayed en route in Kishinev, and there he wrote and became night editor for the Yiddish daily Der id (The Jew) and the Russian Nashe slovo (Our word).

In the spring of 1922, he left Kishinev for Berlin, which in those years was a city of refuge for many Jewish intellectuals who were fleeing Soviet Russia. Svet lived in Berlin until Hitler came to power (1933). His articles were published in Jewish newspapers and periodicals in Yiddish, Russian, Hebrew, and German, such as Berliner Rundschau (Berlin review) in Berlin; Moment  in Warsaw; Idishe shtime (Jewish voice) in Kovno; Frimorgn (Morning) and Sevodnya (Today) in Riga; and Nowy dziennik (New daily) in Cracow; among others.

Over the years 1933-1935, he lived in Paris, where he continued writing correspondence pieces and articles for a variety of newspapers and journals throughout the world, like Haaretz. He was also a special correspondent for newspapers on Zionist and international congresses, as well as for the Berne trial concerning the forged Protocols of the Elders of Zion. He traveled a great deal around Germany, and he visited Denmark, Czechoslovakia, and Switzerland. He interviewed President Masaryk, President Smetona, King Amanullah of Afghanistan, and the English Viceroy in India, the Marquess of Reading, among other personalities.

In 1934 he visited Palestine as a tourist. There he met with Joseph Schmidt, who was on tour here and accompanied him in concerts. In 1935 he moved to Palestine, where he stayed and lived in Jerusalem. He became a member of the editorial board of Haarets. For Haarets he wrote two or three times each week and ran the regular columns: Pinkas yerushalmi (Jerusalem record), Tsilume rega (Photographs of the moment), and Pinat haradyo (The radio corner). He also continued his work for Yiddish newspapers in Europe, the United States, and the state of Israel. In addition, he wrote for Palestine Post and Haolam (The world).

For seven years he was chairman of the journalists’ association in Jerusalem. He belonged to the progressive wing of the General Zionists. He has recorded over 150 performances on history and music on The Voice of Jerusalem radio station.

From 1947 he was a contributor to Forverts (Forward) and Novoie Ruskoie slovo (New Russian word) in New York.

In 1948 he moved to the USA and settled in New York. In New York, he published several works, including Russian Jews in Music (1960), Jews in Russian Musical Culture in the Soviet Period (1968), Jewish Theater in Soviet Russia (1968).

Film about the hardships of Jewish immigrants in New York City during the 1930s.

Excerpt from the film:

Stepping Across the Divide: Hasidic Music in Today's Yiddish Canon