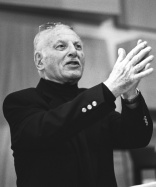 Born in in 1910. Immigrated to the in 1941. Was known as an organist (which he played in synagogues and on tours) and as a composer. Many of his compositions are based on Jewish themes, including liturgical as well as non-liturgical works (chamber, organ and vocal works). The Herman Berlinsky music collection, which contains writings and compositions by Berlinski, is housed in the library of the Jewish Theological Seminary. The collection was arranged by Eliott Kahn.

A online biography of Berlinski can be found here via the Miliken Archive of Jewish Music.

An additional biography can be found here, on the Information Bulletin of the Library of Congress.