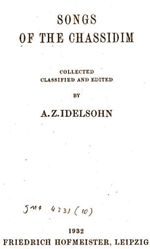 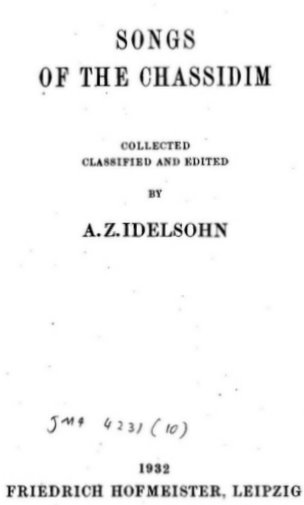 Idelsohn published the last volume of the Thesaurus of Hebrew Oriental Melodies in 1932 on the topic of Hassidic songs and melodies. Idelsohn divides the Hassidic tunes collected in this volume into five categories based on their scales and motives. In addition to the genuine Hassidic tunes, Idelsohn observes two kinds of tunes that are related to Hassidic music: Parodies of Hassidic songs and melodies resembling early Hassidic songs recorded in cantorial manuscripts from the eighteenth and early nineteenth centuries. The Hava Nagila melody is printed in this volume as well without its Hebrew text.

Item 155 from the Thesaurus of Hebrew Oriental Melodies Volume X is A.Z. Idelsohn's third printed notation, in the original text-less form of the Hassidic niggun on which the song Hava Nagila was based. Here Idelsohn is more specific and attributes the niggun to “Sadigora-Krilovitz”. The two printed notations in HOM are quite different from one another. Idelsohn’s notation of the niggun includes extra repeated notes, variant phrase endings, and most importantly a different order of the melodic phrases. The second and third phrases (beginning with Hava N’ranenah and U’rachim in the Hebrew song) are switched in the niggun transcription. The beginning of the second melodic phrase of the niggun functions as a signal (a rhythmic drive that issues in the next section), which is generally placed between phrases and not as part of a final phrase. Although Idelsohn never explains his decision to switch the two phrases, it could have been to distinguish the character of the niggun from that of the emerging genre of Palestinian folksongs.