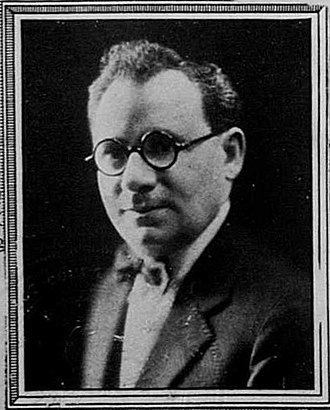 Harry Kandel was an American clarinetist and bandleader, one of the pioneers of modern klezmer music. He ran an orchestra which consisted of a variety of instruments, including himself on clarinet, trombone, tuba, xylophone, cornet, violin, flute, viola and piano. Their hits peaked from about 1916 to 1927, and included "Der shtiler Bulgar", a 1926 song that was later recorded by Benny Goodman as "And the Angels Sing" and Ziggy Elman as "Fralich in Swing".

Kandel studied at the Odessa Conservatory of Music and served in army band of the Russian czar, moving to New York in 1905. He first worked on the vaudeville circuit with the Great Lafayette Band, then appeared on Buffalo Bill's Wild West show. He moved to Philadelphia in 1913 and played in John Philips Sousa's band, forming his own group, Harry Kandel's Famous Inlet Orchestra, in 1916.

Most of his recording career was spent on Victor Records, though he also recorded for Brunswick and Okeh. He recorded several polkas and mazurkas in 1918, releasing them as Polska Orkestra Tancowa, before retiring in 1924 to run a music store. He continued performing on occasions, and appeared on the radio, but did not record again.

Full biography can be seen on Wikipedia.

"Harry Kandel" at the National Library of Israel website.

Harry Kandel manuscripts and public domain records in the Library of Congress.

Harry Kandel listing in the Discography of American Historical Recordings.

Harry Kandel was an American clarinetist and bandleader, one of the pioneers of modern klezmer music. He ran an orchestra which consisted of a variety of instruments...

Born in 1927 in Williamsburg, Brooklyn, Ray is the fourth generation in a family of Klezmer musicians. As a child, Ray learned to play Klezmer dance music at Jewish...

Bulgareasca/ Bulgarish/ Bulgar: the Transformation of a Klezmer Dance Genre

Outline of the article:
Klezmer music
Classification of the Klezmer Genres
Bulgareasca, Bulgarish, Bulgar
The Bulgareasca/ Bulgarish in Eastern Europe
...