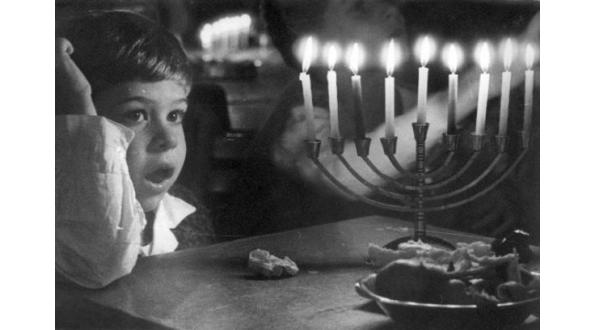 Singing the Hanukah Blessings while lighting the candles is a well-established Jewish family practice that is usually performed by the head of the household according to traditional patterns. Yet, when the lighting of the candles occurred in community contexts, special musical settings were arranged. Our Song of the Month includes a late 19th century choral setting by Samuel David (1836-1895). Born in Paris, David received his musical education at the Conservatoire of Paris, where he was a student of Bazin and Halévy. He wrote operas, four symphonies, and a number of choruses and songs. In 1858 he received the prestigious “Grand Prix de Rome” for his cantata Jephthé (see: http://www.musimem.com/prix-rome-1850-1859.htm. This website includes a rare photo of Samuel David).

In 1872 David became musical director of the Consistoire, the union of synagogues in France. He collected materials from the various synagogues of his home city and published a large selection of them in his comprehensive volume Musique religieuse ancienne et moderne en usage dans les Temples Consistoriaux Israélites de Paris (Paris: Librairie Durlacher, 1895).  This volume was an attempt to standardize the liturgical music of the Parisian synagogues under the authority of the Consistoire regardless of the ethnic background (Sephardic or Ashkenazi) of its members or their religious leanings.

Samuel David’s setting of the Hanukah Blessings is arranged for a soloist accompanied by a four-voice. It opens with an instrumental version of the common Ashkenazi tune for the piyyut (sacred song) Maoz Tzur, sometimes known in English-speaking countries as “Rock of Ages.” The tune for the blessings appears to be an extremely stylized and rhythmicized version of the traditional Ashkenazi blessings. Between the melodies the choir sings “Amen” with the first two bars of the Maoz Tzur melody.

Scholars of Jewish music from each generation, such as Eduard Birnbaum, Abraham Zvi Idelsohn, Eric Werner and Bathja Bayer have tried to locate the origins of the Maoz Tzur tune. The issue however remains open. Hanoch Avenary’s study, published almost thirty-five years ago, summarizes all of his predecessors’ findings and offers the soundest hypothesis available at the moment. See: Hanoch Avenary, The Ma’oz Zur Tune:  New Facts for its History, in Encounters of East and West in Music (Tel Aviv: Tel Aviv University, 1979), pp. 175-185.