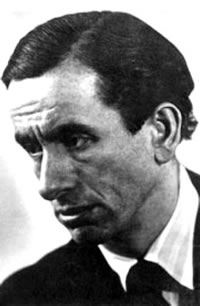 Hans Krása, composer, born . Krása began taking piano lessons at the school of Theresie Wallerstein at the age of six. At age ten, Hans’ father bought him a genuine Amati violin and arranged lessons for him with the concertmaster of the German opera house in . Krása’s father, a prosperous Czech lawyer, used his wealth and social connections to arrange professional performances of some of Hans’ earliest compositions. When Hans wrote his first orchestral work at the age of eleven, his father hired a spa orchestra in to perform the piece. Again in 1913, Hans’ string quartet was performed by members of a spa orchestra in the Swiss town of , where the Krása family often spent their summer vacations. Hans studied at the German Music Academy in , after which he accepted a position as vocal coach at the New German Theater in , under conductor Alexander Zemlisnky.

Krása developed a very close relationship with conductor and mentor Zemlinsky, whom he followed to to continue his studies in orchestral composition at the Conservatory there. While in , Krása became acquainted with conductor Walther Straram, who invited the young man to be his assistant in . Krása declined his offer, instead moving to to study composition with Albert Russell. Although offered many important connections and career opportunities for a young, up-and-coming composer, Krása decided to return home to after spending only a few months in .

Krása’s compositional output during the years leading up to WWII was small but well received. In 1926, he composed Five Songs for Voice and Piano and then six years later in 1932, the cantata Die Erde ist des Herrn. In 1932, Krása also finished his first opera, Verlobung im Traum (Betrothal in a Dream), based on Dostoyevsky’s Uncle’s Dream, for which he received a Czechoslovak State Prize. The opera premiered on Prague Radio in March 1933, and then staged in the German theater that same year under conductor George Szell. Rather than associating with fellow Czech musicians, Krása often preferred to socialize and work in partnership with artists, writers and those involved in avant-garde theater. Through this circle of artists, Krása became acquainted with Adolf Hoffmeister, with whom he collaborated on a number of projects. In 1935, Hoffmeister’s stage play Mládí ve hře (Youth in the Game), premiered at the Czech Theater D 35, with incidental music composed by Krása. The German version of the same piece premiered a few months later at the Klein Buhne (Small Stage) in . Krása’s Anna Song from Hoffmeister’s play was particularly well received, and was performed as a hit single for several years after the premier. Krása himself used the theme from Anna Song as the base for two later works, the String Quartet, “Theme with Variations,” and Chamber music for Cembalo and Seven Instruments.

Krása arrived in Terezín on and quickly became one of the key figures in the musical life of the camp. Krása’s most important musical contribution by far was his children’s opera Brundibár, which he composed in 1938 and adapted for performance in Terezín. The opera was overwhelmingly popular and was performed over 50 times during the years 1942-1944. Krása also composed Tanz (Dance), a string trio for the Terezín ensemble, Passacaglia and Fugue, and a vocal piece entitled Three Songs (1943). Krása was deported to in 1944, and murdered there in October of that year. Krása’s work has been renewed through a variety of projects that promote performances of Brundibár for audiences all around the world.

Rafael Schächter was born May 27, 1905, in Braila (Rumania). After World War I, Schächter moved to Brno, where he began his formal musical studies. He continued his studies at...

Zikmund Schul was born on January 11,