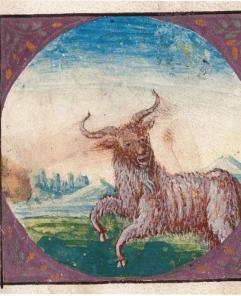 Written in Aramaic, Had Gadya appears at the very end of the Passover Haggadah.  Like Ehad Mi Yodeah, also found at the end of the Haggadah, it is a cumulative song, with each verse adding another motif to the story. It begins with a kid bought by the “father” (of the singer-subject of the song), which in the next verse is eaten by the cat, which is bitten by the dog, and so forth.

An excerpt of the song as printed in a German Haggadah (Hamburg-Altona, 1751). 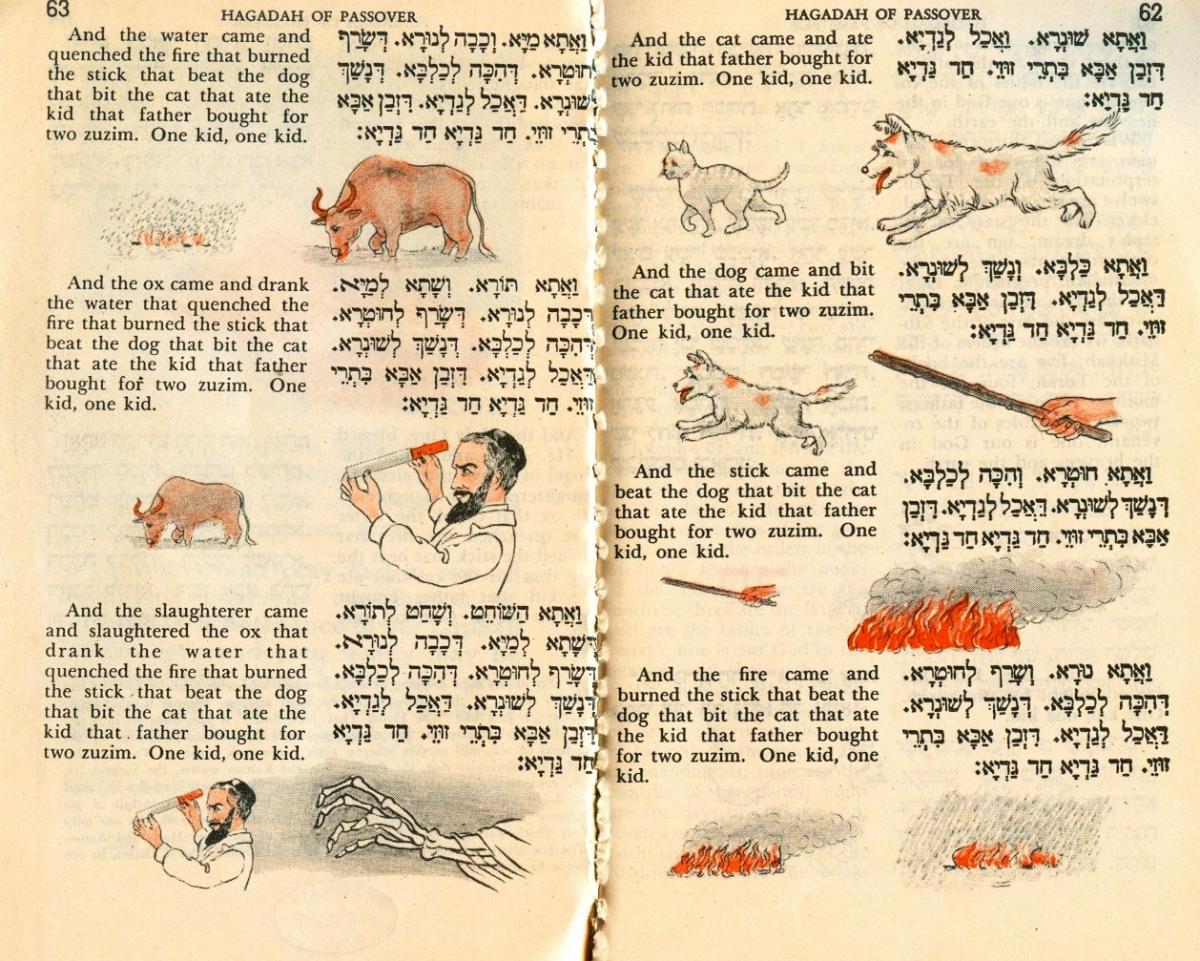 The Study of Had Gadya

Had Gadya has been the object of intensive study by a distinguished gallery of modern Jewish and non-Jewish scholars since the early nineteenth-century, starting with Leopold Zunz. Fascinated by its unusual content, the song has been subjected by scholars to a plethora of hypothesis regarding its origin, path of dissemination and meaning(s). The most comprehensive recent study of Had Gadya is the article by Menachem Zvi (Harry) Fox, “On the history of the songs ‘Ehad mi yode’a’ and ‘Had Gadya’ in Israel and among the nations,” Assufot: Annual of Jewish Studies 2 (5748[1988]), 201-226 (in Hebrew). This important study recapitulates most of the previous relevant literature on the topic while at the same time offers a sounding analysis of the possible origins of the song on the basis of tangible sources. The content of Fox’s article was digested in English, updated and amended by Joseph Tabory, in his definitive essay “The Haggadah and its Ritual,” included in the JPS Commentary on the Haggadah (Philadephia 2008, pp. 67-69). In the following paragraphs we present Fox and Tabory’s main findings succinctly and exemplify the modern fate of the song with in contemporary Israeli musical repertoire.

Had Gadya was incorporated to the Passover Haggadah no later than the end of the fifteenth century; it makes one of its earliest appearances in a manuscript page attached to a copy of the Prague Haggadah of 1526 now in possession of the National Library of Israel. In this manuscript version the song appears in Aramaic with a Yiddish-German translation (in Hebrew characters). This Yiddish-German version was studied in detail by Chone Szmeruk (Shmeruk), in his essay, “The earliest Aramaic and Yiddish version of the ‘Song of the Kid’ (Khad Gadye),” The Study of Yiddish: Studies in Language, Yiddish Folklore and Literature 1 (1954), pp. 214-218 where he claims having seen an earlier version in a manuscript called "Sireni Ms." that has been identified as Ms. ON 859 4/280 of the Institute for the Research of Italian Jewry in Jerusalem.The uniqueness of this version however is the appearance of the mouse in the chain of violent acts. We shall return to this unique feature below.

Detail of the Aramaic and Yiddish translation from the 1526 Prague Haggadah.

The song appears for the first time in print in the Prague Haggadah (1590). However, the song in different versions appears in the repertoire of Provençal and Central-European Jewish communities prior to its earliest appearance in print, perhaps as early as the fifteenth century. 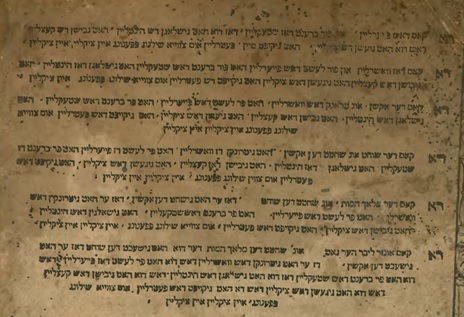 Rabbi Yedidiyah Tiah Weill (1721-1805) in his commentary Haggadah im bi’ur hadash ha-marbe le-sapper, published in Karlsruhe, 1791, mentions in relation to the songs ‘Ehad mi yode’a’ and ‘Had Gadya’ their appearance in a now lost, anonymous manuscript of a Hebrew prayer book in parchment apparently still found during his time (end of the eighteenth-century) in the Beit Midrash of Worms (Germany) and dated 1406. On fol. 47a of his Haggadah commentary, Rabbi Weill says the following in relation to Had Gadya “And I heard that they found this piyyut… safeguarded and written on a parchment at the Beit Midrash Rokeah [named after Rabbi Eleazar ben Yehudah ben Kalonymus of Worms, 1176-1238] in Worms and it was decided that it will be sung on the eve of Passover for all generations to come.” (Fox, “The songs,” p. 201). It remains unclear whether Rabbi Weill saw this fifteenth century manuscript or just heard about it.

Another early evidence of the song appears in Ms. Paris, Bibliotheque Nationale, heb. 637, a siddur (prayer book) according to the custom of Provence, apparently written by a Sephardic Jew residing in Provence in the fifteenth century. This version of the song, unrelated at this point to the Haggadah, is the most logical in its sequence (the mouse eats the rope to which the ox that the father bought is attached, the cat eats the mouse, etc.), the quality of the Aramaic language is high (until all later versions that are contaminated by Hebrewisms), and finally it lacks the theosophical ending. This later feature apparently was added once the song became a fixed feature of the Haggadah’s closing section. Hereby follows an English translation of this version:[1]

In short, the song appears to have circulated in its initial folk version in Provence, in a transitional form, transmitted perhaps by Jews expelled from France throughout the fourteenth century, among Ashkenazi Jews in Worms (if the 1406 manuscript source mentioned by Rabbi Yedidiyah Weill is indeed reliable) and in Italy (the Sireni Haggadah, including also an Yiddish translation) before reaching the final stage, the one known until today, in the 1590 Prague Haggadah. Only later the song was introduced to the traditions of the Sephardic and Oriental Jews and was translated into the vernacular (Ladino, Arabic, etc.).

Songs similar to Had Gadya are found in Anglo-Saxon and Romance folk traditions, attesting for its widespread appeal in non-Jewish cultures in Europe and beyond. Among these famous parallels is the one included in Mother Goose’s rhymes, ‘This is the House that Jack Built’. Other closer English parallels were located in the folklore of New England. A German folk-song, ‘Der Herr der Schickt den Jokel aus,’ is another variant of which was sung in certain places in Germany on September 17, the date of St. Lambert, and therefore called ‘Lambertuslied’ (see F. Nork, Festkalender, enthaltend: Die Sinndeute der monatszeichen, Stuttgart 1847, pp. 587-588). Also French chansons (e.g. Gaston Paris, “La chanson du chevreau,” Romania 1 [1872], 218-225) and nursery-rimes (‘Ah! Tu sortiras, Biquett,’ ‘La petite fourmi qui allait à Jérusalem’) bear remarkable resemblances to Had Gadya. German, French, and modern Greek variants of Had Gadya are discussed by G. A. Kohut (“Le had gadya et les chansons similaires,” Revue des Etudes Juives 31 (1895), 240-246).

Some scholars have pointed to Jewish texts as a source of inspiration for Had Gadya, most notably a midrash about Abraham and Nimrod in Bereshit Rabbah, 38. In this midrash, Nimrod suggests to Abraham that since he renounced his father’s idols, he should worship the fire like him. Abraham argues with him by saying that water has power over fire. Nimrod replies: let us worship water. Abraham continues, saying that clouds absorb the water, and they are dispersed by the wind. Nimrod then agrees to worship the wind. But Abraham than says that a man can withstand wind, and thus he is stronger. Exhausted by the arguing, Nimrod throws Abraham into his god, the fire but God saves Abraham. This and other Jewish sources may account for the specific theosophical unfolding of Had Gadya as opposed to its parallels in European folklore.

Had Gadya can be viewed originally as a carnavelesque zemer for the whole family to sing. Indeed in some families the participants in the performance dress up as the characters in the song. On the other hand, all the actions described in the poem are violent, which challenges its festive character.

Once the theosophical ending was fully adopted, Had Gadya was interpreted in various forms throughout the centuries. The most common interpretations are allegorical, such as the one comparing the kid to the Jewish people, the father who bought it to God, and the other characters to nations who conquered Israel, ending with God coming and liberating the Jewish people from its persecutors.

A contemporary take on Had Gadya and its musical setting

Along with its various literary interpretations, Had Gadya was translated, as already mentioned above, into most Jewish languages as well as modern languages employed by Jews (such as American English) and acquired different melodies throughout the Jewish diaspora (see: Ladino version, Bukharan version, Moroccan version). One of the most interesting and elaborated melodies is the one by the hazzan Itzik Offenbach of Cologne set to the German translation (‘Ein Lämmchen’) with piano accompaniment, allegedly by Itzik’s famous son, the composer Jacques Offenbach; the original says “composeé par J. Offenbach” which could apply to both father or son. It is included in Offenbach’s Haggadah (Köln, 1838, unpaginated musical appendix, no. 6). This melody reappears in Abraham Baer’s Ba’al Tefillah, (Göteborg, 1887, no. 773; see also the version in English, Young Israel, vol. 2, London 1898, no. 14).

One specific contemporary adaptation was written by Chava Alberstein and was included in her album London (1989). The melody was based off the Italian song Alla fiera dell’est (‘At the Eastern Fair’) composed by the Italian singer and song-writer Angelo Branduardi in 1976. As opposed to Branduardi's rather calm song, Alberstein's Had Gadya was intended as a protest song with a political message. It was released during the first Palestinian Intifada. In her version, the song is sung only until the arrival of the angel of death, and then goes to an addition of her own that makes a clear message: Israel, a nation that used to be oppressed (the basic theme of the Haggadah), acts now as the oppressor.

Had Gadya continues to be a beloved popular song in Israel, periodically inspiring new versions in various languages and new music settings. Recently we came across a new Israeli rock-blues version, created in kibbutz Ma'abarot. The celebration of the seder, a religious ceremony anchored in the ancient practices of the rabbis, in the nominally secular kibbutzim is a rooted phenomenon in Israeli culture since the 1920s. The seder celebrated in Ma’abarot includes around a thousand participants. Members of the younger generation of the kibbutz wrote and composed their own new version of Had Gadya. It is played now every year and accompanies a staged play by the first graders of the kibbutz.[2] Click to listen.

Alexander Knapp, “The little goat meets the little chicken: parallels between two celebratory songs in the Jewish and Bukharan traditions,” Across Centuries and Cultures (2010), pp. 57-73.

[1] We thank Ron Levi, a graduate student from the Hebrew University from kibbutz Ma'abarot, for this information.

Had Gadya in German

Had Gadya in Yiddish 1

Had Gadya in Yiddish 2

Had Gadya in Ladino

Had Gadya in Kibbutz Ma'abarot

Recording from the 2007 seder in Kibbutz Ma'abarot.

We thank Ron Levi for the recording.

Written in Aramaic, Had Gadya appears at the very end of the Passover Haggadah.  Like Ehad Mi Yodeah, also found at the end of the Haggadah, it is a cumulative song, with...

More Precious Than Pearls: Shbahoth - Songs of Praise in the Jewish-Babylonian tradition for General Use, Sabbaths, Festivals and Life Cycle Events

A compilation of 31 Jewish-Babylonian songs, including Hebrew texts, English translations and transliterations. 17 songs are also performed by the author (voice), Ehsan Alemam ('ud) and Waleed (...