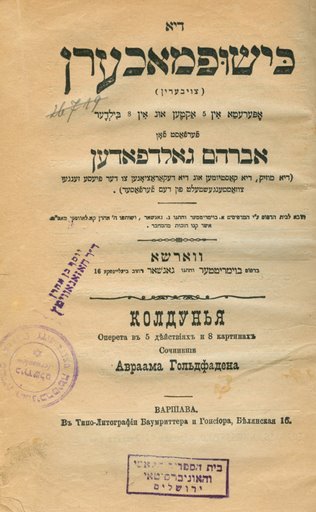 Goldfaden’s Di Kishefmakerin (The Sorceress), based on the Slavic folklore character Baba Yaga, was premiered in 1877 in Iaşi, Romania. The operetta follows the story of Bashe, Avromste’s wife and Mirele’s step-mother, who plots with her evil sister Bobe Yachne to acquire all of their assets. Bashe and Bobe Yachne succeed in having Avromste arrested, and Mirele sold into slavery. After many reversals of fortune, Avromste, Mirele, and Marcus (Mirele’s fiancé) are reunited, and the villainous Bashe and Bobe Yachne perish in a fire they set to kill their victims. Di Kishefmakerin was produced in New York City in 1881, and in 1922 by the Moscow Yiddish State Chamber Theater (GOSET). Like Die Kaprizne Kalemoyd, the libretto of Di Kishefmakerin was published in Warsaw by Baumritter & Gonsher. All of the works released by this publisher lacked musical scores, likely for fear of copyright infringement. Source: Yiddish Drama Collection at the Jewish National and University Library.