To view the song's lyrics, click on the picture above.

In the Ladino tradition, the copla is a unique Jewish genre, as opposed to the romance. The majority of the coplas repertoire is meant to be sung in context with the yearly holiday cycle. This copla is documented in the tradition of the Eastern-Mediterranean Sephardim: in various manuscripts: a Hebrew manuscript from Sarajevo (1794), one from Venice (1744), as well as in Shir Emunim (Amsterdam, 1793) and in the booklet titled Complas de las flores, edited by Natan Sebi in Salonica, ca.1800. It is one of several coplas which use a motive of debates, and it is attributed to the well known coplero Yehuda Val’I of the 18th century. However, in the actual oral tradition it has been almost forgotten in the communities of the Eastern area, but is widely known by the Sephardim of Northern Morocco, from which we have several recordings from Tetuan and Tangier informants. The present version is sung by Clarita Benaim-Levy, who was born in Melilla and, since her marriage, lived in Tetuan, until she moved to Madrid where she lives since then.

The text presents a debate between the different flowers, arguing which of them deserves to be the one who should praise God. Each flower presents its case, bragging about its virtues: the one says it is famous for its perfume, the other tells about the syrup or sweet jam that can be made out of it (it was customary to receive visitors with different jams, either to be taken with a fork or with a spoon, what they call in the Eastern communities: "pirron y cuchara"), one tells how rich people appreciate its smell, or use it to wash their faces... As is frequent in the Coplas' repertoire, there are some Hebrew words: "berajot" (benedictions), and in the refrain: "El Hai Sur Olamim.".

The text is structured in eight verses’ stanzas with a repeated two verses’ refrain. The stanzas have a common rhyme in verses 2, 4, 6, and 7 and the last verse always rhyming with the second verse of the repeated refrain. Thus, the music divides the ten verses of the textual stanza into three identical musical strophes, each strophe consisting of four musical phrases. . 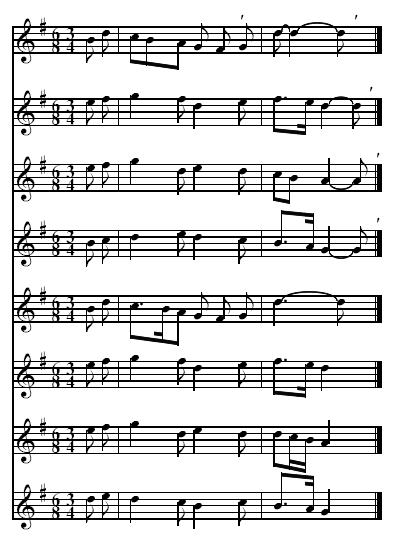 Transcription of the song's melody