A Bookshelf On Top of the Sky: 12 Stories about John Zorn 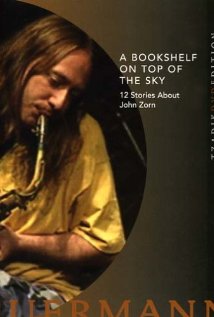 John Zorn is a Jewish American composer who has been active in the New York music scene since the mid 1970s. During that period, Zorn's music has dabbled in free jazz, hardcore punk music, soundtracks, Jewish music, modern art, surf music, and countless other styles and genres of musical expression. He often fuses these elements into one song creating an idiosyncratic style of polystylistic composition. This film, directed by and starring Claudia Heuermann, attempts to document him during different stages of his career. While the content of the film is for the most part interesting, as it portrays Zorn discussing his music and performing and conducting many of his different ensembles, the form of the film is slightly off putting as the main focus of the film is in fact not Zorn but rather Heurmann, and the difficulties that she encountered while making the film.

The scenes with Zorn add interesting perspectives to his music as he discusses his approach to composition, his Jewish heritage and the influence that it had on his music. One of Zorn's Bands, Masada, is featured prominently in this film. Masada is a quartet comprised of Zorn on sax, Joey Baron on drums, Dave Douglas on trumpet and Greg Cohen on double bass. Masada, like many of his other projects, fuses different musical genres together, but here the focal point is the meeting between jazz and different Jewish musical traditions such as Klezmer and Sephardic music. Zorn creates here what he calls radical Jewish culture, a prominent motif of his later career and a series of releases on his own record label, Tzadik, which is dedicated to exposing and releasing different series of radical music. A few of those series are New Japan, Soundtrack, and the aforementioned Radical Jewish Culture. More information of Radical Jewish Culture can be found in Heuermann's other documentary film, Sabbath in Paradise which deals specifically with the radical Jewish music scene of New York City.

A Bookshelf On Top of the Sky: 12 Stories about John Zorn

John Zorn is a Jewish American composer who has been active in the New York music scene since the mid 1970s. During that period, Zorn...

This 1932 film, based on Shalom Asch's novel, was one of the first American Yiddish films. It deals with many of the...