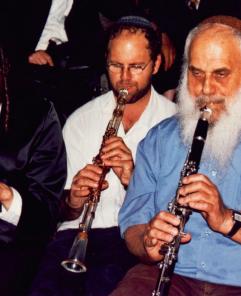 The word "menagen" (menágn in a Yiddish accent) comes from the verb "nagen," which in the hasidic writings and in oral tradition means singing (and not playing an instrument, which is its usual Hebrew meaning). The terms "Menagen," "Ba'al Menagen," as well as the less common "Ba'al Negina," signify a person who is gifted with one of these musical skills: singing with a good voice; proficiency in niggunim with accurate singing; composing of Niggunim; and any other musical talent. For example, "our old rabbi [=Shneur Zalman of Lyady] was a wonderful Menagen. Not only did he know the rules of the Negina [music], but also the meaning (Inyan) of the Negina."[1]In other words, the rabbi knew the hidden, mystical meaning of music in general and niggunim in particular.

Just as the verb "nagen" was changed from playing an instrument to singing, there are hasidim that when speaking Hebrew will use the verb "Shir" (Heb. singing) for playing an instrument! On the other hand, lately in Israel, probably under the influence of modern Hebrew, there are a few hasidim who use the term 'Menagen' as a synonym for 'Klezmer.'