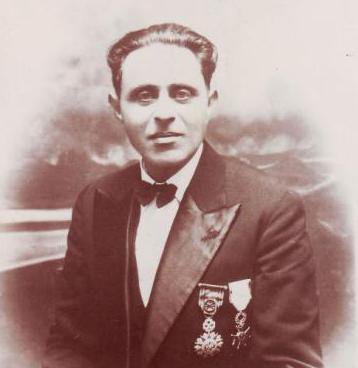 Asher Shimon Mizrahi was born in the old city of in 1890 to father Yitzhak Mizrahi, who was a well-known torah scholar and teacher. After the first few years of Asher’s life, his family moved outside the old city walls and built a new home across from the Sephardic Synagogue in the newly established neighborhood of Montefiore, known today as Yamin Moshe. The Mizrahi family made their living by renting the use of their wooden oven to members of the community to do their cooking and baking. Residents of the neighborhood would bring biskochos (cookies), borrekas (stuffed phyllo dough pastries) and Hamin (a slow cooked stew that is the staple meal for Shabbat) to be cooked in the Mizrahi oven.

From an early age, people in the community took notice of Asher Mizrahi’s pleasant voice and musical talents, and he began to earn money working as a local hazzan and as an ud musician. He also supported himself by selling embroidered “taligas,” or prayer shawl pouches, and ornamented curtains for the ark in the Synagogue. Asher was married at a young age to Rachel of the house of Elishaich, with whom he had two daughters, Rebecca and Sara.

During the Balkan War (1912-1913), many young Jewish residents of fled the city or hid in order to escape the Turkish draft. Rabbi Eliyahu Panigel, a wealthy merchant and admirer of Asher Mizrahi, helped him to escape from Eretz on a cargo boat exporting oranges to . The small Jewish community of wasn’t able to utilize the services of a hazzan of Mizrahi’s level, and therefore he ultimately chose to settle in . Asher Mizrahi assimilated very quickly to Tunisian life and culture, and within a year was able to bring his wife and children. In he taught piyyutim and Jerusalemite songs to the locals. He also composed and exported to many songs about his yearning for , which were enthusiastically received and performed at community baqqashot gatherings. Mizrahi was also heavily entrenched in the cultural life of the Muslim community in and composed many songs in Arabic.

In 1919, with the conclusion of WWI and the release of the Balfour Declaration, Asher Mizrahi decided to return to Jerusalem with his family, which now included two more children—Yehudit and Yitzhak. Upon his return to Yamin Moshe, Mizrahi became a highly respected figure in the musical life of , writing songs in Ladino, composing new piyyutim, and performing and teaching. Yaakov Yehoshua writes in his book Yaldut b’Yerushalayim ha’Yeshana, “Asher Mizrahi was the most famous of the instrumentalists and paytanim that performed in .  He was known and admired even by Arabs in their cities and in small towns, and for the women of , who in the meantime had become old and gray; Ashriko Mizrahi was one of the musicians that especially stood out. All of us, men and women, were infatuated with him because of his handsome looks. He was dark, with green eyes, and a pleasing voice that captured one's heart. Unlike other musicians whose dress was sloppy, Ashriko was strict with his dress; his neck was always covered with a white or colorful silk kerchief, which was also a way of protecting his throat from the night’s chill. When he would enter a room with his musician friends, all present would rise in his honor. His ud was a gift from the house of Shachiv, and was wrapped in a white silk pouch. He had a slow and measured walk that communicated recognition of his self-worth.” In addition to his many other business endeavors, Asher Mizrahi was certified as a butcher, but never pursued the career.

In 1926, he was invited to perform at the great Synagogue Eliyahu Ha’Navi in . In awe of Mizrahi's talent, the Jewish community of asked him to stay and serve as their cantor and butcher, but he declined their generous offer. The 1929 Palestine Riots broke down the delicate relationship that had been built between Jews and Arabs living in Eretz . Security officials suggested that Mizrahi stop using the tarboosh (a Turkish instrument) in his performances, which was one of the central instruments in his ensemble. The Arab public took this move as an expression of Mizrahi’s support for Zionism, and as a result he received many threats which caused him to leave Eretz and return to .  Mizrahi had a seamless return to . He gained fame through his diverse body of songs in Arabic, and became one of the leading composers of Tunisian song. The great Tunisian singers of the time, both Muslim and Jewish, performed his songs, most notably the Jewish singer-actress Habiba Masika, also known as “Havivat el kol” (a double-meaning, implying 'friendly to all' and 'friendly voice'). Jesse Riachi, in a story about the first meeting between Habiba Masika and Asher Mizrahi recalls, “She stopped him, stood by him and with smiling eyes and said, ‘Mr. Asher, would you be so kind as to teach me how to play the ud?’ ‘Who are you?’ he asked. ‘I am the niece of Laila Sefeg (herself a famous singer), how can you refuse?’ Asher taught her to play the ud, and other basic instruments of song and dance.”  Upon Masika’s tragic death at the young age of 35, Mizrahi composed a tribute in her honor.

In the early 1930’s, Asher Mizrahi traveled to Paris to make a recording along with fellow musicians Sheikh El-Afrit, Shafia Rushdie and Dalila Masoud Achabib. The film company Pathè filmed a short movie, more like a clip, with Asher Mizrahi singing one of his songs and accompanying himself on the Ud. This short film was screened at cinemas as a preview to the main attraction.  In the late 1930’s he was accepted as member of the French Union of Artists and Composers. In 1946, Asher Mizrahi released a collection of his piyyutim, “Ma’adenei Melech,” published by Machloof Nijar Masousa.

Hemdi Abasi’s notes in his book, “Tunis Shara v’Rokedet,” that Sheikh El-Afrit owes his most famous song, “Te’Saper o’ Titkarev,” to Asher Mizrahi. In this way, even songs that were written in Arabic, for an Arab audience, expressed Asher Mizrahi’s longing for his homeland. Hemdi Abasi also recounts that Asher Mizrahi’s voice was one of the first to be aired on the new broadcast station established in . The first song of his released on air was, “Utini busa min pumek, Ishwa damek ya Mahlook” (“Give me a kiss from your mouth, God how beautiful you are”), which became very popular and remained on the lips of all who heard it. Tunisian Radio allowed Asher Mizrahi to participate in a special program in Hebrew, broadcast every Monday.  When one of the Monday programs fell on Shavuot, he refused to appear, and the radio terminated his contract.

Jewish-Tunisian singer Raul Jorno was a great admirer of Asher Mizrahi. In an interview on Israeli television for the movie series “Mikratago l’Yerushalayim” (from 1993). Raul Jorno recounted that Asher Mizrahi was “one of the three greatest composers in ” and noted that “only Asher Mizrahi, only he was able to sing in the Baghdadi style—one of the most complicated kinds of Arabic song.” Asher Mizrahi won several awards, the most noted of which was the “Nishan Ip-Tiher,” awarded to him by the Tunisian government.

In February of year after gained independence from France, Habib Burgiba, the president of the new Republic visited the school “Or Torah” in the Jewish quarter.  Sharel Hadad, the president of the Tunisian Jewish community wrote in his book, “Tzarfat——, Shalosh Ahavot” (“——, Three Loves”) “Asher Mizrahi accepted his [the President's] request and composed a song in Arabic especially for his visit. The President, Habib Burgiba enjoyed it very much and was particularly surprised by Mizrahi’s delicate and native Arabic.”

In 1967, with help from Sharel Hadad, who was also a lawyer, Asher Mizrahi returned to after almost forty years living abroad.  He arrived in August, only a few weeks after the Six-Day War. While in Marseille, Asher Mizrahi managed to make a final recording of several songs and the Avodah service for Yom Kippur, as "payment" to Sharel Hadad for helping to secure his immigration papers.  Asher's health began to deteriorate, and he could no longer tour his childhood neighborhood of the old city, the kotel and Yamin Moshe. By the fall of 1967, Asher was bed-ridden, and could not make it out to participate in the hakafot (practice of carrying the torah scrolls in circuits) for Simchat Torah that was held next to the Jaffa Gate. Asher Mizrahi passed away the day after that Simchat Torah celebration.

In the same year, a new edition of his book “Ma’adenei Melech" was printed. His book was distributed on Shabbat Zachor, a day that many Synagogues dedicated to the memory of Asher Mizrahi. Eulogies were given in Asher's honor by the great Sephardic Rabbis of , Rabbi Ovadia Yosef, Rabbi David Shalosh, Rabbi David Gaz, the Chief Rabbi of and Rabbi Eliyahu Pardes. Today, sixty years after the first release of “Ma’adenei Melech" we still hear Asher Mizrahi's piyyutim in many of the Sephardic and Mizrahi communities in and around the world.

Documentary (in Hebrew) about the life and compositions of Asher Mizrahi.

Asher Shimon Mizrahi was born in the old city of in 1890 to father Yitzhak Mizrahi, who was a well-known torah scholar and teacher. After the...

Also exists in Hebrew. Music of Sephardi Jews in the Mediterranean - local traditions and the influence of Spanish Jews in these countries.

Born in . Officiated as cantor in